The endocrine system includes all of the glands of the body and the hormones produced by those glands. The glands are controlled directly by stimulation from the nervous system as well as by chemical receptors in the blood and hormones produced by other glands. By regulating the functions of organs in the body, these glands help to maintain the body’s homeostasis. Cellular metabolism, reproduction, sexual development, sugar and mineral homeostasis, heart rate, and digestion are among Continue Scrolling To Read More Below... 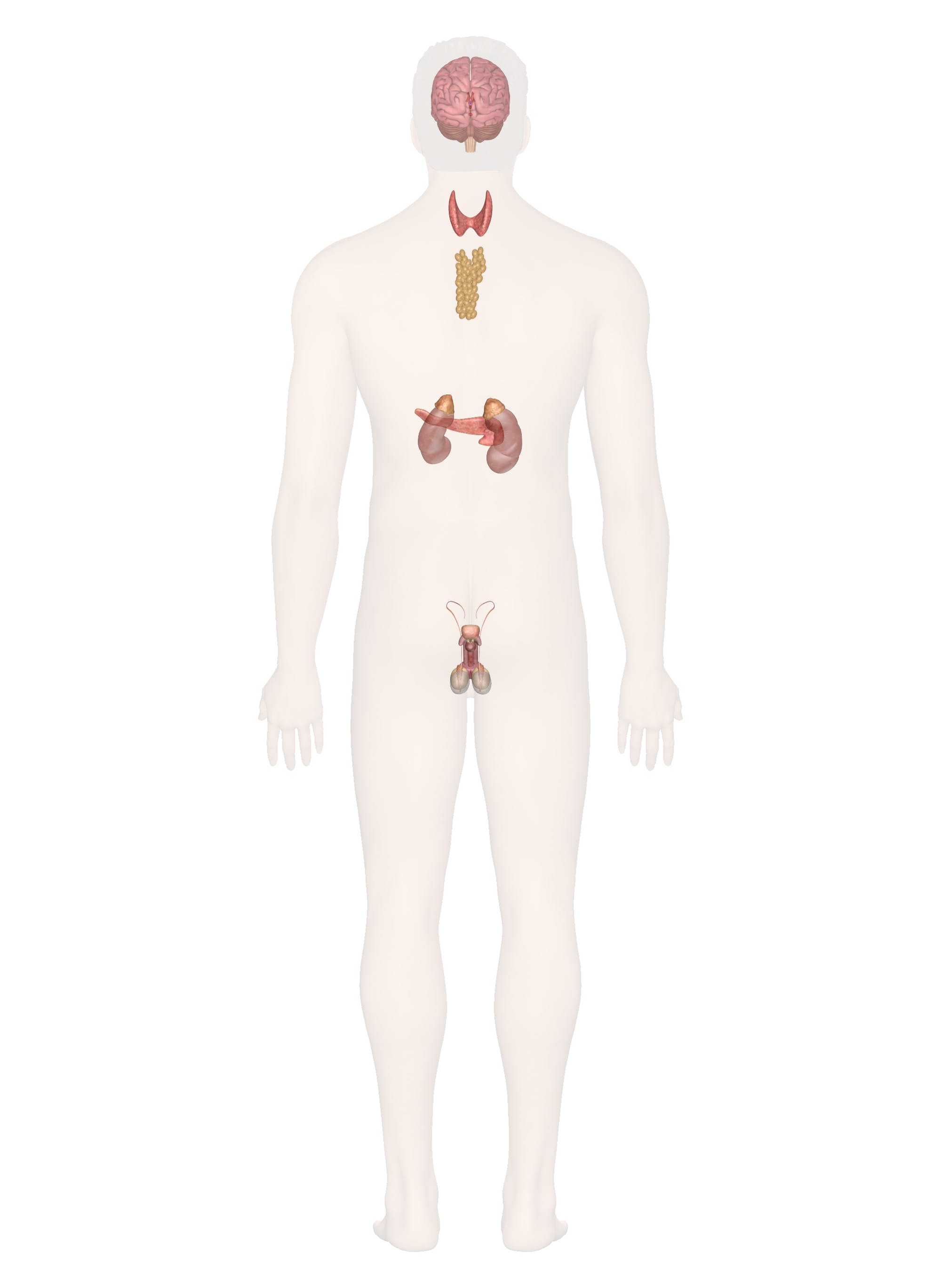 Continued From Above... the many processes regulated by the actions of hormones.

Anatomy of the Endocrine System

The hypothalamus is a part of the brain located superior and anterior to the brain stem and inferior to the thalamus. It serves many different functions in the nervous system, and is also responsible for the direct control of the endocrine system through the pituitary gland. The hypothalamus contains special cells called neurosecretory cells—neurons that secrete hormones:

The pituitary gland, also known as the hypophysis, is a small pea-sized lump of tissue connected to the inferior portion of the hypothalamus of the brain. Many blood vessels surround the pituitary gland to carry the hormones it releases throughout the body. Situated in a small depression in the sphenoid bone called the sella turcica, the pituitary gland is actually made of 2 completely separate structures: the posterior and anterior pituitary glands.

The pineal gland is a small pinecone-shaped mass of glandular tissue found just posterior to the thalamus of the brain. The pineal gland produces the hormone melatonin that helps to regulate the human sleep-wake cycle known as the circadian rhythm. The activity of the pineal gland is inhibited by stimulation from the photoreceptors of the retina. This light sensitivity causes melatonin to be produced only in low light or darkness. Increased melatonin production causes humans to feel drowsy at nighttime when the pineal gland is active.

Calcitonin is released when calcium ion levels in the blood rise above a certain set point. Calcitonin functions to reduce the concentration of calcium ions in the blood by aiding the absorption of calcium into the matrix of bones. The hormones T3 and T4 work together to regulate the body’s metabolic rate. Increased levels of T3 and T4 lead to increased cellular activity and energy usage in the body.

The adrenal cortex produces many cortical hormones in 3 classes: glucocorticoids, mineralocorticoids, and androgens.

The adrenal medulla produces the hormones epinephrine and norepinephrine under stimulation by the sympathetic division of the autonomic nervous system. Both of these hormones help to increase the flow of blood to the brain and muscles to improve the “fight-or-flight” response to stress. These hormones also work to increase heart rate, breathing rate, and blood pressure while decreasing the flow of blood to and function of organs that are not involved in responding to emergencies.

The pancreas is a large gland located in the abdominal cavity just inferior and posterior to the stomach. The pancreas is considered to be a heterocrine gland as it contains both endocrine and exocrine tissue. The endocrine cells of the pancreas make up just about 1% of the total mass of the pancreas and are found in small groups throughout the pancreas called islets of Langerhans. Within these islets are 2 types of cells—alpha and beta cells. The alpha cells produce the hormone glucagon, which is responsible for raising blood glucose levels. Glucagon triggers muscle and liver cells to break down the polysaccharide glycogen to release glucose into the bloodstream. The beta cells produce the hormone insulin, which is responsible for lowering blood glucose levels after a meal. Insulin triggers the absorption of glucose from the blood into cells, where it is added to glycogen molecules for storage.

The thymus is a soft, triangular-shaped organ found in the chest posterior to the sternum. The thymus produces hormones called thymosins that help to train and develop T-lymphocytes during fetal development and childhood. The T-lymphocytes produced in the thymus go on to protect the body from pathogens throughout a person’s entire life. The thymus becomes inactive during puberty and is slowly replaced by adipose tissue throughout a person’s life.

In addition to the glands of the endocrine system, many other non-glandular organs and tissues in the body produce hormones as well.

Physiology of the Endocrine System

The endocrine system works alongside of the nervous system to form the control systems of the body. The nervous system provides a very fast and narrowly targeted system to turn on specific glands and muscles throughout the body. The endocrine system, on the other hand, is much slower acting, but has very widespread, long lasting, and powerful effects. Hormones are distributed by glands through the bloodstream to the entire body, affecting any cell with a receptor for a particular hormone. Most hormones affect cells in several organs or throughout the entire body, leading to many diverse and powerful responses.

Once hormones have been produced by glands, they are distributed through the body via the bloodstream. As hormones travel through the body, they pass through cells or along the plasma membranes of cells until they encounter a receptor for that particular hormone. Hormones can only affect target cells that have the appropriate receptors. This property of hormones is known as specificity. Hormone specificity explains how each hormone can have specific effects in widespread parts of the body.

The levels of hormones in the body can be regulated by several factors. The nervous system can control hormone levels through the action of the hypothalamus and its releasing and inhibiting hormones. For example, TRH produced by the hypothalamus stimulates the anterior pituitary to produce TSH. Tropic hormones provide another level of control for the release of hormones. For example, TSH is a tropic hormone that stimulates the thyroid gland to produce T3 and T4. Nutrition can also control the levels of hormones in the body. For example, the thyroid hormones T3 and T4 require 3 or 4 iodine atoms, respectively, to be produced. In people lacking iodine in their diet, they will fail to produce sufficient levels of thyroid hormones to maintain a healthy metabolic rate. Finally, the number of receptors present in cells can be varied by cells in response to hormones. Cells that are exposed to high levels of hormones for extended periods of time can begin to reduce the number of receptors that they produce, leading to reduced hormonal control of the cell.

Hormones are classified into 2 categories depending on their chemical make-up and solubility: water-soluble and lipid-soluble hormones. Each of these classes of hormones has specific mechanisms for their function that dictate how they affect their target cells.