The ovaries, a pair of tiny glands in the female pelvic cavity, are the most important organs of the female reproductive system. Their importance is derived from their role in producing both the female sex hormones that control reproduction and the female gametes that are fertilized to form embryos.

Each ovary is a small glandular organ about the shape and size of an almond. The ovaries are located on opposite sides of the uterus in the pelvic cavity and are attached to the uterus by the ovarian ligament. Continue Scrolling To Read More Below... 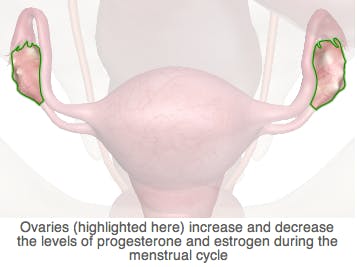 Continued From Above... The open ends of the fallopian tubes rest just beyond the lateral surface of the ovaries to transport ova, or egg cells, to the uterus.

The tissues of the ovaries are arranged into several distinct layers:

Function of the Ovaries

The ovaries play two central roles in the female reproductive system by acting as both glands and gonads. Acting as glands, the ovaries produce several female sex hormones including estrogens and progesterone. Estrogen controls the development of the mammary glands and uterus during puberty and stimulates the development of the uterine lining during the menstrual cycle. Progesterone acts on the uterus during pregnancy to allow the embryo to implant and develop in the womb.

At birth the ovaries contain anywhere from several hundred thousand to several million circular bundles of cells known as follicles. Each follicle surrounds and supports a single oocyte that has the ability to mature into an ovum, the female gamete. Despite this large number of potential ova, only around 4,000 oocytes survive to puberty and only 400 oocytes mature into ova in a woman’s lifetime. During each menstrual cycle around 10-20 follicles and their oocytes begin to develop under the influence of the pituitary hormone follicle-stimulating hormone (FSH). Of these follicles, only one cell completes its development and becomes a mature ovum.

Polycystic ovary syndrome (PCOS) is a very common disorder that causes a variety of symptoms in women, including disruption of a woman’s normal menstrual cycle.

Ovarian cancer is the fifth highest cause of cancer death among American women. DNA health tests can help you discover if you are at a genetically higher risk of developing ovarian and breast cancers.