The hypothalamus is the most important center for homeostasis in the human body. While it is a small region of the brain, it controls many vital bodily functions, including hunger, thirst, body temperature, and hormone secretion.

The hypothalamus is a small mass of nervous tissue within the brain inferior to the thalamus and anterior to the midbrain. Continue Scrolling To Read More Below... 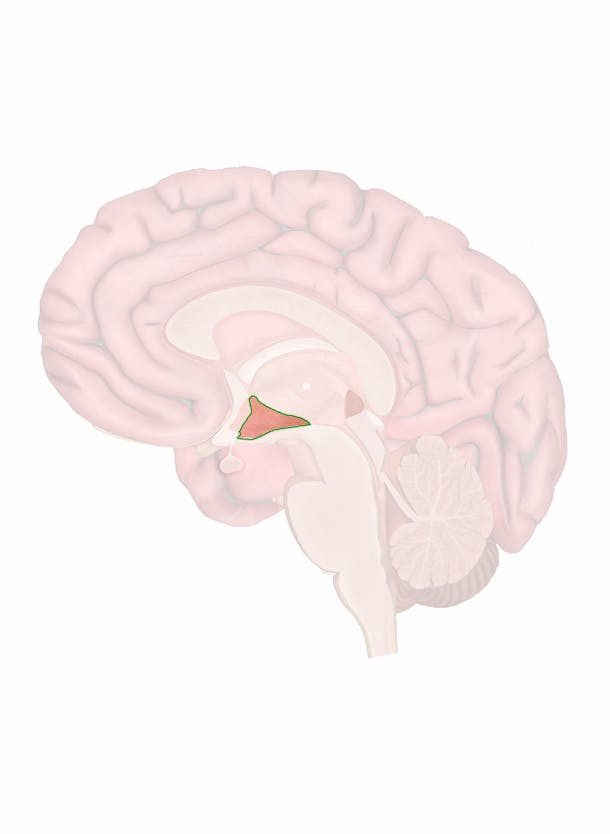 Within the hypothalamus are eleven tiny masses of gray matter known as nuclei that control vital bodily functions. The preoptic, supraoptic, and suprachiasmatic nuclei are the most anterior nuclei, which form a vertical line inferior to the anterior commissure and superior to the optic chiasm. Posterior to these nuclei are the paraventricular, anterior, and arcuate nuclei, which form a vertical line inferior to the fornix and superior to the infundibulum of the pituitary gland. A third vertical line of nuclei is formed by the dorsomedial and ventromedial nuclei. Finally, the posterior and lateral nuclei, along with the mammillary body, form the most posterior nuclei of the hypothalamus.

The hypothalamus is responsible for the maintenance of many homeostatic functions of the body through its interface between the nervous and endocrine systems. These functions include hunger, thirst, sleep and wakefulness, and control of the endocrine system.

Thirst is regulated by the paraventricular and supraoptic nuclei, which produce antidiuretic hormone (ADH). In response to osmoreceptors that monitor the osmotic balance of the body, these nuclei produce the sensation of thirst until the proper level of hydration is restored. They also produce ADH, which travels throughout the body and prevents water loss through urination. When ADH is produced in high concentrations, the kidneys reabsorb water to produce highly concentrated urine.

The body’s natural sleep cycle, or circadian rhythm, is regulated by the suprachiasmatic nucleus of the hypothalamus. This nucleus is located superior to the optic chiasm where the left and right optic nerves meet and cross many of their neurons on their way to the visual cortex of the brain. Some of the neurons in the optic chiasm synapse with the suprachiasmatic nucleus to provide information about the amount of light and time of day. The suprachiasmatic nucleus maintains this sense of time and sends outputs to various regions of the brain to control activity levels, alertness, drowsiness, hunger, and body temperature. The end result of these outputs is the development of a sleep/wake cycle that remains fairly constant.

The endocrine system is also controlled by several nuclei, including the preoptic and arcuate nuclei. These nuclei produce releasing and inhibiting hormones, which are secreted into portal veins that carry them directly to the anterior pituitary gland. Releasing hormones stimulate the anterior pituitary gland to release its own hormones, while inhibiting hormones inhibit the release of pituitary hormones. Because the pituitary gland produces the hormones that control the functions of the other endocrine glands, the hypothalamus ultimately controls most of the endocrine system through its own hormones.