The stomach, gallbladder, and pancreas are three of the most important digestive organs in the human body. These organs work together to produce and store secretions that digest our food into its most basic building blocks. Once digested, these small molecules pass into our intestines to be absorbed and to feed our body’s tissues. These three major organs also produce hormones that help to coordinate their functions and even lead to the feeling of fullness after consuming a meal. Continue Scrolling To Read More Below... 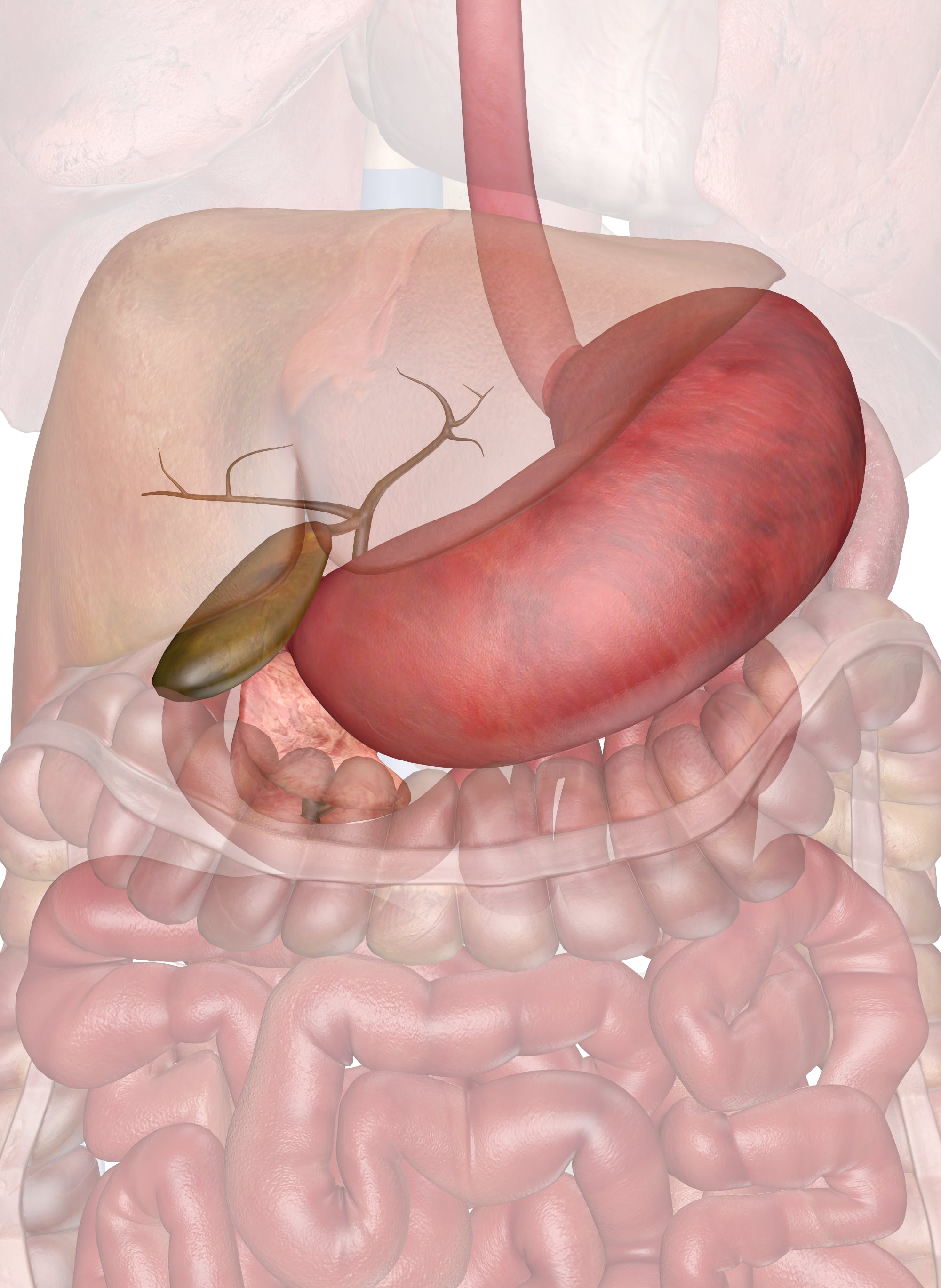 Anatomy of the Stomach, Gallbladder, and Pancreas

A hollow muscular organ about the size of 2 closed fists, the stomach is located inferior to the diaphragm and lateral to the liver on the left side of the abdominal cavity. The stomach forms part of the gastrointestinal tract between the esophagus and the duodenum (the first section of the small intestine).

The pancreas is a 6-inch long heterocrine gland located inferior to the stomach and surrounded by the duodenum on its medial end. This organ extends laterally from the duodenum toward the left side of the abdominal cavity, where it tapers to a point.

The pancreas is considered a heterocrine gland because it has both endocrine and exocrine gland functions. Small masses of endocrine cells known as pancreatic islets make up around 1% of the pancreas and produce the hormones insulin and glucagon to regulate glucose homeostasis in the blood stream. The other 99% of the pancreas contains exocrine cells that produce powerful enzymes that are excreted into the duodenum during digestion. These enzymes together with water and sodium bicarbonate secreted from the pancreas are known as pancreatic juice.

Physiology of the Stomach, Gallbladder, and Pancreas

The stomach, gallbladder, and pancreas work together as a team to perform the majority of the digestion of food.

The stomach, gallbladder, and pancreas all function together as storage organs of the digestive system. The stomach stores food that has been ingested and releases it in small masses to the duodenum. The release of small masses of food at a time improves the digestive efficiency of the intestines, liver, gallbladder, and pancreas and prevents undigested food from making its way into feces.

As they are accessory organs of the digestive system, the gallbladder and pancreas have no food passing through them. They do, however, act as storage organs by storing the chemicals necessary for the chemical digestion of foods. The gallbladder stores bile produced by the liver so that there is a sufficient supply of bile on hand to digest fats at any given time. The pancreas stores the pancreatic juice produced by its own exocrine glands so that it is prepared to digest foods at all times.

The stomach, gallbladder, and pancreas all share the common function of secretion of substances from exocrine glands. The stomach contains 3 different exocrine cells inside of its gastric pits: mucous cells, parietal cells, and chief cells.

The mixture of mucus, hydrochloric acid, and pepsin is known as gastric juice. Gastric juice mixes with food to produce chyme, which the stomach releases into the duodenum for further digestion.

The gallbladder stores and secretes bile into the duodenum to aid in the digestion of chyme. A mixture of water, bile salts, cholesterol, and bilirubin, bile emulsifies large masses of fats into smaller masses. These smaller masses have a higher ratio of surface area to volume when compared to large masses, making it easier for them to be digested.

The pancreas stores and secretes pancreatic juice into the duodenum to complete the chemical digestion of food that began in the mouth and stomach. Pancreatic juice contains a mixture of enzymes including amylases, proteases, lipases, and nucleases.

Several hormones are used to regulate the functions of the stomach, gallbladder, and pancreas. The hormones gastrin, cholecystokinin, and secretin are secreted by organs of the digestive system in response to the presence of food and change the function of the stomach, gallbladder, and pancreas. Our pancreas produces the hormones insulin and glucagon to affect the behavior of cells throughout the body.

Cholecystokinin, a hormone produced in the walls of the small intestine, is released into the bloodstream in response to the presence of chyme in the intestine that contains high levels of proteins and fats. Proteins and fats are more difficult for the body to digest than carbohydrates are, so CCK is important in making changes to the digestive system to handle these types of foods. CCK travels through the bloodstream to the stomach, where it slows the emptying of the stomach to give the intestines more time to digest the protein- and fat-rich chyme. CCK also stimulates the gallbladder and pancreas to increase their secretion of bile and pancreatic juice to improve the digestion of fats and proteins. Finally, CCK is detected by receptors in the satiety center of the hypothalamus that control the feeling of hunger. The satiety center reads the presence of CCK as an indication that the body is no longer hungry for food.

Secretin is another hormone produced by the intestinal walls, but unlike CCK, it is produced in response to the acidity of chyme that the stomach releases into the duodenum. Secretin flows through the bloodstream to the stomach, where it inhibits the production of hydrochloric acid by parietal cells. Secretin also binds to receptors in the gallbladder and pancreas, stimulating them to secrete increased amounts of bile and pancreatic juice. Sodium bicarbonate present in pancreatic juice neutralizes the acidity of the chyme to prevent damage to the walls of the duodenum and provides a neutral pH environment for the digestion of chyme.

Insulin is a hormone produced by the beta cells of the pancreatic islets of the pancreas. The pancreas produces insulin in response to the presence of high levels of glucose in the blood. Insulin stimulates cells, particularly in the liver and skeletal muscles, to absorb glucose from the blood and use it as an energy source or store it as glycogen. Insulin also stimulates adipocytes to absorb glucose to build triglycerides for energy storage. Our body produces higher levels of insulin following a meal in order to remove glucose molecules from the blood before they can reach high concentrations and become toxic to the body’s cells.

Glucagon is a hormone produced by the alpha cells of the pancreatic islets of the pancreas. Glucagon acts as an antagonist to insulin by stimulating the release of glucose into the bloodstream to raise blood glucose levels between meals. Hepatocytes in the liver store glucose in large macromolecules known as glycogen. Glucagon binding to receptors on hepatocytes triggers the breakdown of glycogen into many glucose molecules, which are then released into the bloodstream.