The esophagus is a long, thin, and muscular tube that connects the pharynx (throat) to the stomach. It forms an important piece of the gastrointestinal tract and functions as the conduit for food and liquids that have been swallowed into the pharynx to reach the stomach.

The esophagus is about 9-10 inches (25 centimeters) long and less than an inch (2 centimeters) in diameter when relaxed. It is located just posterior to the trachea in the neck and thoracic regions of the body and passes through the esophageal hiatus of the diaphragm on its way to the stomach. Continue Scrolling To Read More Below... 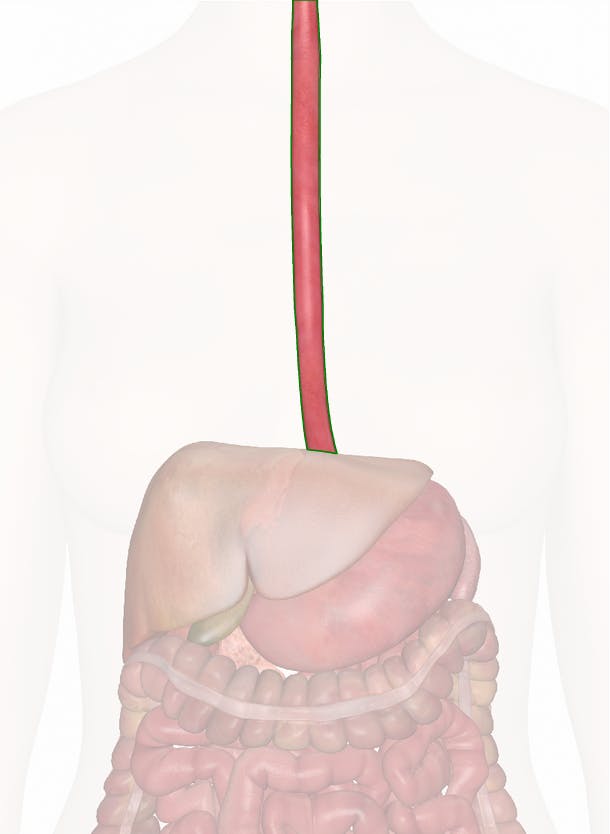 Like the rest of the gastrointestinal tract, the esophagus is made of four distinct tissue layers.

The esophagus is involved in the processes of swallowing and peristalsis to move substances from the mouth to the stomach. The swallowing food begins in the mouth and continues with the contraction of skeletal muscles in the pharynx and esophagus. The upper esophageal sphincter dilates to permit the swallowed substance to enter the esophagus. From this point, waves of muscle contraction called peristalsis move food toward the stomach. In peristalsis, regions of the esophagus closer to the stomach open to permit food to pass through while the region just above the food contracts to push the food onward. Peristalsis works so well that food can be swallowed even while the body is lying down, upside down, or even in zero-gravity.

A final function of the esophagus is its participation in the vomiting reflex to void the contents of the stomach. Peristalsis is reversed in the esophagus during vomiting to forcefully remove toxic or pathogen-laden food from the body.