The stomach is the main food storage tank of the body. If it were not for the stomach’s storage capacity, we would have to eat constantly instead of just a few times each day. The stomach also secretes a mixture of acid, mucus, and digestive enzymes that helps to digest and sanitize our food while it is being stored. Continue Scrolling To Read More Below... 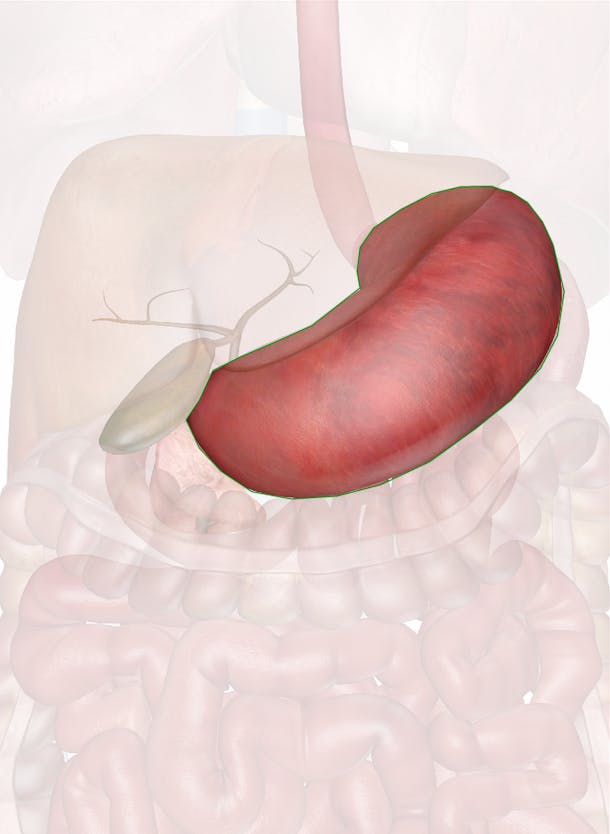 Anatomy of the Stomach

The stomach is a rounded, hollow organ located just inferior to the diaphragm in the left part of the abdominal cavity. Located between the esophagus and the duodenum, the stomach is a roughly crescent-shaped enlargement of the gastrointestinal tract. The inner layer of the stomach is full of wrinkles known as rugae (or gastric folds). Rugae both allow the stomach to stretch in order to accommodate large meals and help to grip and move food during digestion.

The stomach can be divided into four regions based on shape and function:

Microscopic analysis of the stomach’s structure reveals that it is made of several distinct layers of tissue: the mucosa, submucosa, muscularis, and serosa layers.

The outermost layer of the stomach surrounding the muscularis layer is the serosa — a thin serous membrane made of simple squamous epithelial tissue and areolar connective tissue. The serosa has a smooth, slippery surface and secretes a thin, watery secretion known as serous fluid. The smooth, wet surface of the serosa helps to protect the stomach from friction as it expands with food and moves to mix and propel the food.

Physiology of the Stomach

In the mouth, we chew and moisten solid food until it becomes a small mass known as a bolus. When we swallow each bolus, it then passes through the esophagus to the stomach where it is stored along with other boluses and liquids from the same meal.

The size of the stomach varies from person to person, but on average it can comfortably contain 1-2 liters of food and liquid during a meal. When stretched to its maximum capacity by a large meal or overeating, the stomach may hold up to 3-4 liters. Distention of the stomach to its maximum size makes digestion difficult, as the stomach cannot easily contract to mix food properly and leads to feelings of discomfort.

The stomach produces and secretes several important substances to control the digestion of food. Each of these substances is produced by exocrine or endocrine cells found in the mucosa.

The activity of the stomach is under the control of several hormones that regulate the production of stomach acid and the release of food into the duodenum.