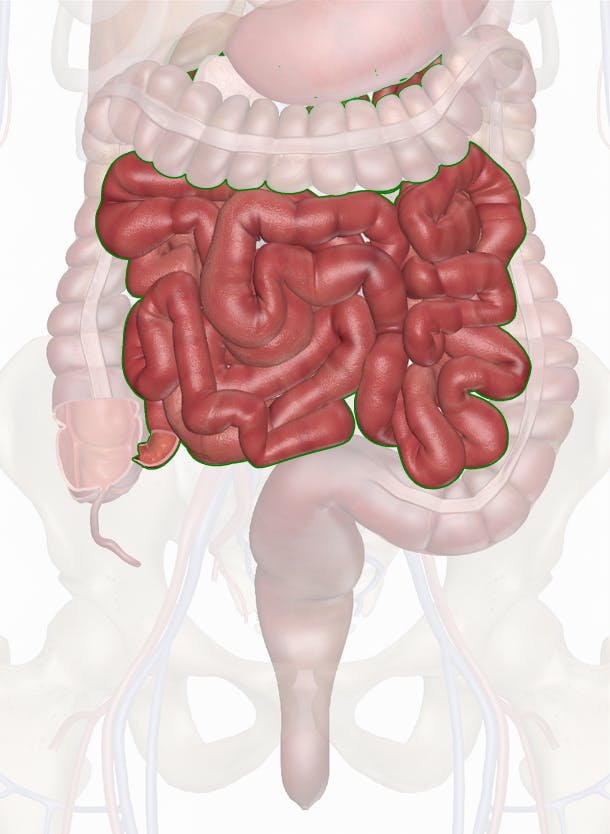 Continued From Above... Blood vessels, nerves, and lymphatic vessels pass through the mesentery to support the tissues of the small intestine and transport nutrients from food in the intestines to the rest of the body.

The small intestine can be divided into 3 major regions:

Like the rest of the gastrointestinal tract, the small intestine is made up of four layers of tissue. The mucosa forms the inner layer of epithelial tissue and is specialized for the absorption of nutrients from chyme. Deep to the mucosa is the submucosa layer that provides blood vessels, lymphatic vessels, and nerves to support the mucosa on the surface. Several layers of smooth muscle tissue form the muscularis layer that contracts and moves the small intestines. Finally, the serosa forms the outermost layer of epithelial tissue that is continuous with the mesentery and surrounds the intestines.

The small intestine processes around 2 gallons of food, liquids, and digestive secretions every day. To ensure that the body receives enough nutrients from its food, the small intestine mixes the chyme using smooth muscle contractions called segmentations. Segmentation involves the mixing of chyme about 7 to 12 times per minute within a short segment of the small intestine so that chyme in the middle of the intestine is moved outward to the intestinal wall and contacts the mucosa. In the duodenum, segmentations help to mix chyme with bile and pancreatic juice to complete the chemical digestion of the chyme into its component nutrients. Villi and microvilli throughout the intestines sway back and forth during the segmentations to increase their contact with chyme and efficiently absorb nutrients.

Once nutrients have been absorbed by the mucosa, they are passed on into tiny blood vessels and lymphatic vessels in the middle of the villi to exit through the mesentery. Fatty acids enter small lymphatic vessels called lacteals that carry them back to the blood supply. All other nutrients are carried through veins to the liver, where many nutrients are stored and converted into useful energy sources.

Chyme is slowly passed through the small intestine by waves of smooth muscle contraction known as peristalsis. Peristalsis waves begin at the stomach and pass through the duodenum, jejunum, and finally the ileum. Each wave moves the chyme a short distance, so it takes many waves of peristalsis over several hours to move chyme to the end of the ileum.

This important organ is susceptible to a variety of diseases and disorders, including IBS and IBD. Did you know that some of us are genetically at higher risk of developing celiac disease, a gluten intolerance that harms our small intestine? Learn more about DNA health testing to find out how taking a test can tell you whether it’s true for you.