The duodenum is the first and shortest segment of the small intestine. It receives partially digested food (known as chyme) from the stomach and plays a vital role in the chemical digestion of chyme in preparation for absorption in the small intestine. Many chemical secretions from the pancreas, liver and gallbladder mix with the chyme in the duodenum to facilitate chemical digestion.

Located inferior to the stomach, the duodenum is a 10-12 inch (25-30 cm) long C-shaped, hollow tube. The duodenum is a part of the gastrointestinal (GI) tract, attached to the pyloric sphincter of the stomach on its superior end and to the jejunum of the small intestine on its inferior end. Continue Scrolling To Read More Below... 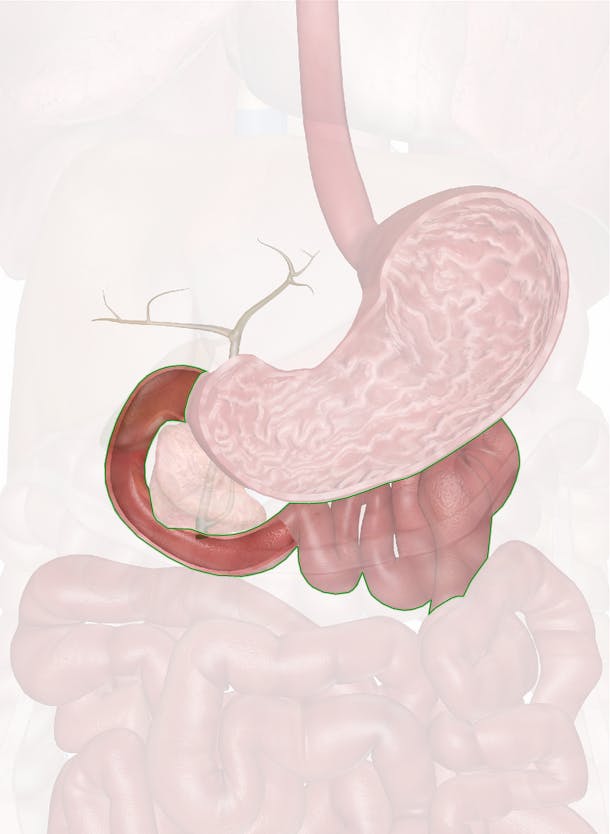 Continued From Above... The pancreas, liver and gallbladder all deliver their digestive secretions into the duodenum through an orifice known as the ampulla of Vater, which is located roughly in the middle of the duodenum on the left side.

The walls of the duodenum are made of four layers of tissue that are consistent with the structure of the rest of the gastrointestinal tract:

After being stored and mixed with hydrochloric acid in the stomach for about 30 to 60 minutes, chyme slowly enters the duodenum through the pyloric sphincter. Next, Brunner’s glands in the mucosa of the duodenum secrete alkaline mucus containing a high concentration of bicarbonate ions to neutralize the hydrochloric acid present in the chyme. This alkaline mucus both protects the walls of the duodenum and helps the chyme to reach a pH conducive to chemical digestion in the small intestine.

Upon reaching the ampulla of Vater in the middle of the duodenum, chyme is mixed with bile from the liver and gallbladder, as well as pancreatic juice produced by the pancreas. These secretions complete the process of chemical digestion that began in the mouth and stomach by breaking complex macromolecules into their basic units. Bile produced in the liver and stored in the gallbladder acts as an emulsifier, breaking lipids into smaller globules to increase their surface area. Pancreatic juice contains many enzymes to break carbohydrates, lipids, proteins and nucleic acids into their monomer subunits. For example, pancreatic lipase breaks triglycerides, or fats, into glycerol and fatty acids that can be absorbed into the bloodstream by the intestinal wall. These secretions are thoroughly mixed with the chyme by contractions of the duodenum until all of the digestible material is chemically digested.

Slow waves of smooth muscle contraction known as peristalsis flow down the length of the gastrointestinal tract to push chyme through the duodenum. Each wave begins at the stomach and pushes chyme a short distance toward the jejunum. It takes many peristaltic contractions over the course of an hour for chyme to travel through the entire length of the duodenum. Small regional contractions of the intestinal wall, known as segmentations, help to mix chyme with the digestive secretions in the duodenum and increase the rate of digestion. Segmentations also increase the contact of chyme with the mucosal cells to increase the absorption of nutrients through the intestinal wall.