The pancreas is a glandular organ in the upper abdomen, but really it serves as two glands in one: a digestive exocrine gland and a hormone-producing endocrine gland. Functioning as an exocrine gland, the pancreas excretes enzymes to break down the proteins, lipids, carbohydrates, and nucleic acids in food. Functioning as an endocrine gland, the pancreas secretes the hormones insulin and glucagon to control blood sugar levels throughout the day. Both of these diverse functions are vital to the body’s survival. Continue Scrolling To Read More Below... 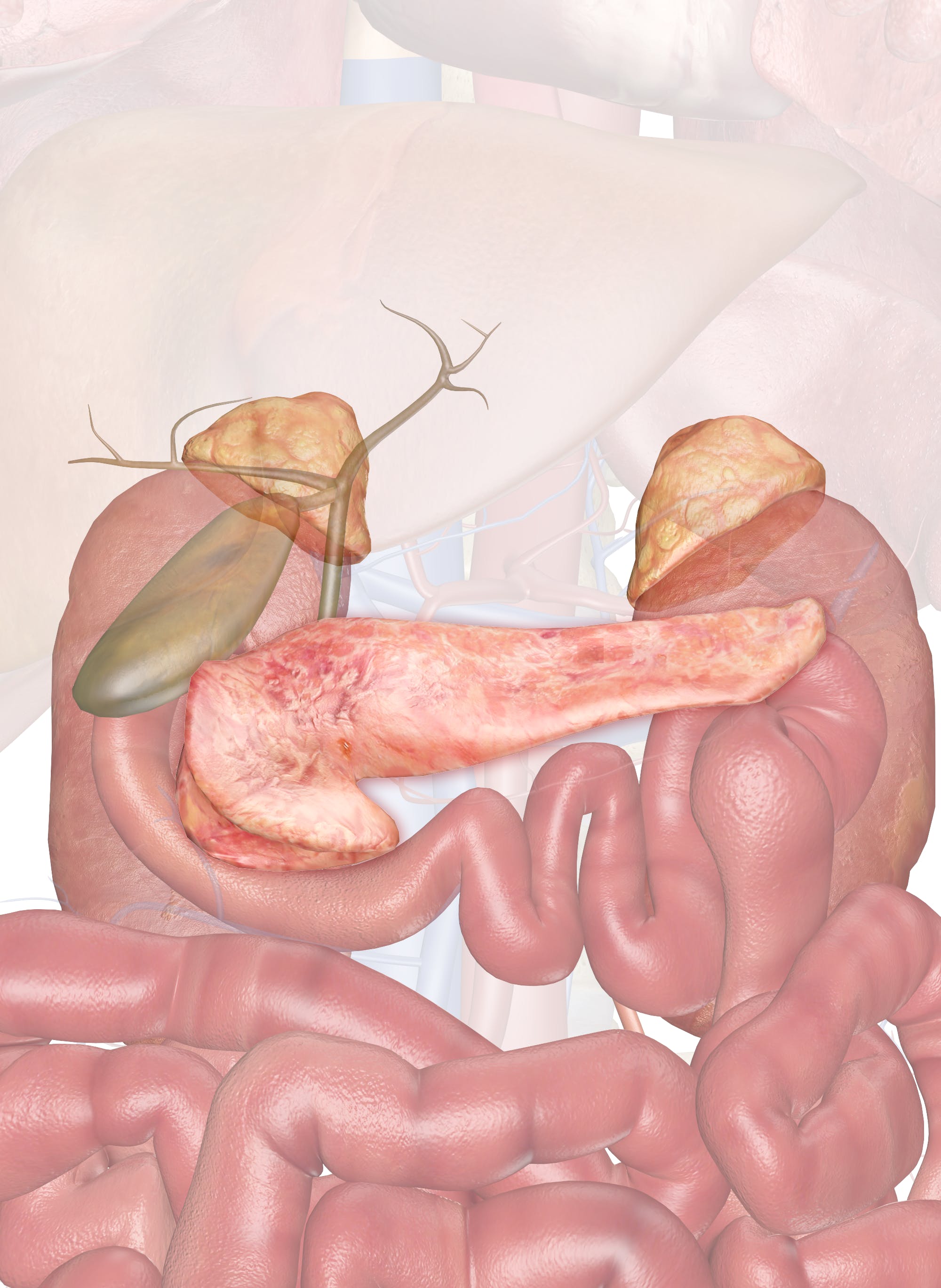 Anatomy of the Pancreas

The pancreas is classified as a heterocrine gland because it contains both endocrine and exocrine glandular tissue. The exocrine tissue makes up about 99% of the pancreas by weight while endocrine tissue makes up the other 1%. The exocrine tissue is arranged into many small masses known as acini. Acini are small raspberry-like clusters of exocrine cells that surround tiny ducts. The exocrine cells in the acini produce digestive enzymes that are secreted from the cells and enter the ducts. The ducts of many acini connect to form larger and larger ducts until the products of many acini run into the large pancreatic duct.

The endocrine portion of the pancreas is made of small bundles of cells called islets of Langerhans. Many capillaries run through each islet to carry hormones to the rest of the body. There are 2 main types of endocrine cells that make up the islets: alpha cells and beta cells. Alpha cells produce the hormone glucagon, which raises blood glucose levels. Beta cells produce the hormone insulin, which lowers blood glucose levels.

Physiology of the Pancreas

The exocrine portion of the pancreas plays a major role in the digestion of food. The stomach slowly releases partially digested food into the duodenum as a thick, acidic liquid called chyme. The acini of the pancreas secrete pancreatic juice to complete the digestion of chyme in the duodenum. Pancreatic juice is a mixture of water, salts, bicarbonate, and many different digestive enzymes. The bicarbonate ions present in pancreatic juice neutralize the acid in chyme to protect the intestinal wall and to create the proper environment for the functioning of pancreatic enzymes. The pancreatic enzymes each specialize in digesting specific compounds found in chyme.

The endocrine portion of the pancreas controls the homeostasis of glucose in the bloodstream. Blood glucose levels must be maintained within certain limits so that there is a constant supply of glucose to feed the cells of the body but not so much that glucose can damage the kidneys and other organs. The pancreas produces 2 antagonistic hormones to control blood sugar: glucagon and insulin.

The pancreas is controlled by both the autonomic nervous system (ANS) and the endocrine system. The ANS has 2 divisions: the sympathetic and the parasympathetic.

The endocrine system uses 2 hormones to regulate the digestive function of the pancreas: secretin and cholecystokinin (CCK).

If the ducts leading from the pancreas are blocked in some way — such as when a gallstone blocks the ampulla of Vater - pancreatic fluids can build up in the pancreas and may then become activated so that they digest the pancreas itself. This condition is known as acute pancreatitis. If the onset is gradual and longer-term, we call it chronic pancreatitis.

Pancreatic cancer has one of the direst prognoses of any of the types of cancer, in part because it tends to be very metastatic (it spreads rapidly) and because it is often undiagnosed at an early stage.

Pancreatic surgery can be quite problematic for several reasons:

Due to the complexities, candidates for surgery are often strongly advised to seek their treatment in a facility that conducts a higher volume of such procedures.

Hereditary hemochromatosis and diabetes mellitus involve the pancreas as well. You can test for your inherited genetic risk of hemochromatosis using modern DNA health testing.