The heart is a muscular organ about the size of a closed fist that functions as the body’s circulatory pump. It takes in deoxygenated blood through the veins and delivers it to the lungs for oxygenation before pumping it into the various arteries (which provide oxygen and nutrients to body tissues by transporting the blood throughout the body). The heart is located in the thoracic cavity medial to the lungs and posterior to the sternum.

On its superior end, the base of the heart is attached to the aorta, Continue Scrolling To Read More Below... 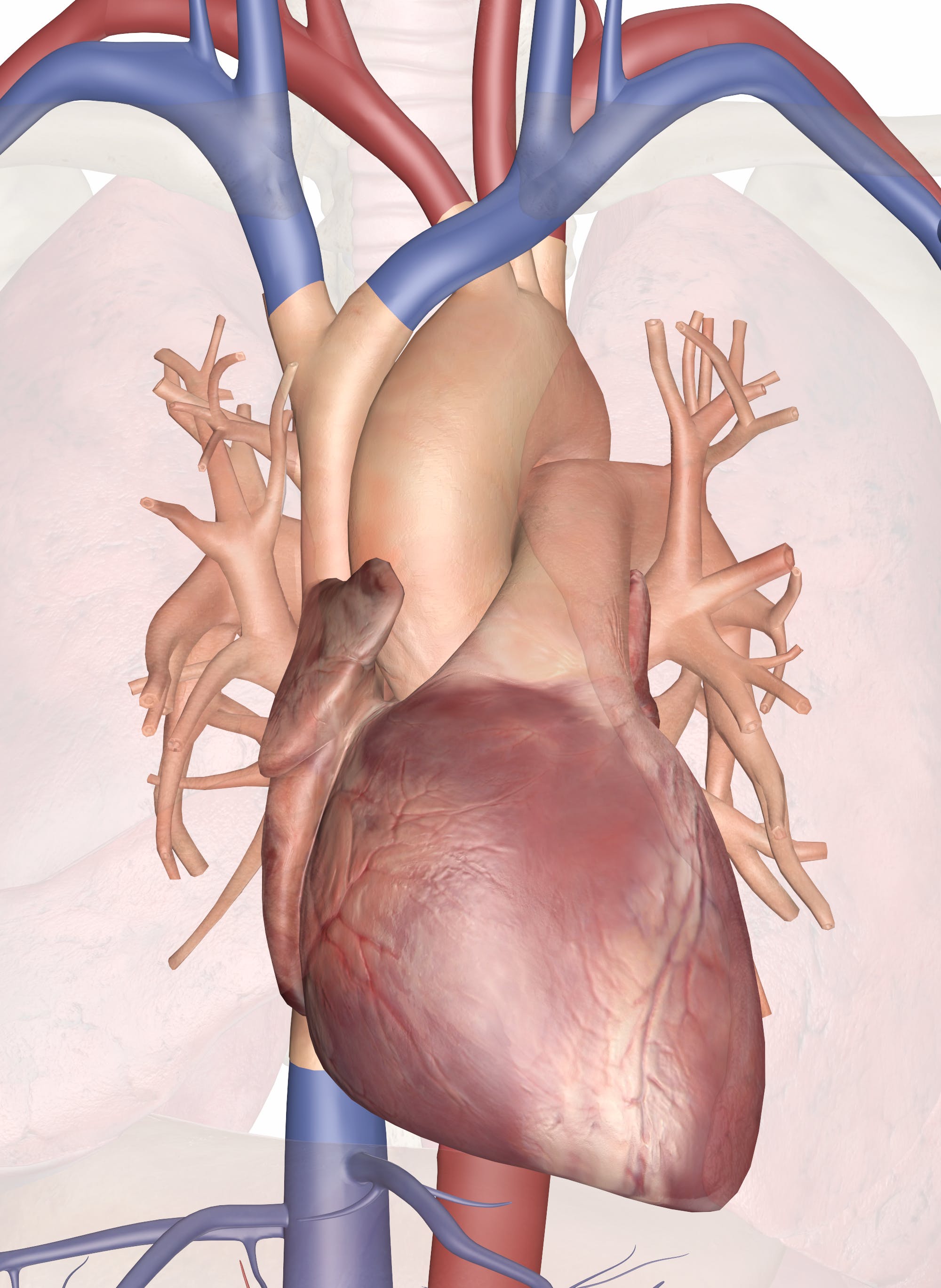 Continued From Above... pulmonary arteries and veins, and the vena cava. The inferior tip of the heart, known as the apex, rests just superior to the diaphragm. The base of the heart is located along the body’s midline with the apex pointing toward the left side. Because the heart points to the left, about 2/3 of the heart’s mass is found on the left side of the body and the other 1/3 is on the right.

Anatomy of the Heart

Structure of the Heart Wall

The heart wall is made of 3 layers: epicardium, myocardium and endocardium.

Chambers of the Heart

Valves of the Heart

The heart functions by pumping blood both to the lungs and to the systems of the body. To prevent blood from flowing backwards or “regurgitating” back into the heart, a system of one-way valves are present in the heart. The heart valves can be broken down into two types: atrioventricular and semilunar valves.

Conduction System of the Heart

The conduction system starts with the pacemaker of the heart—a small bundle of cells known as the sinoatrial (SA) node. The SA node is located in the wall of the right atrium inferior to the superior vena cava. The SA node is responsible for setting the pace of the heart as a whole and directly signals the atria to contract. The signal from the SA node is picked up by another mass of conductive tissue known as the atrioventricular (AV) node.

The AV node is located in the right atrium in the inferior portion of the interatrial septum. The AV node picks up the signal sent by the SA node and transmits it through the atrioventricular (AV) bundle. The AV bundle is a strand of conductive tissue that runs through the interatrial septum and into the interventricular septum. The AV bundle splits into left and right branches in the interventricular septum and continues running through the septum until they reach the apex of the heart. Branching off from the left and right bundle branches are many Purkinje fibers that carry the signal to the walls of the ventricles, stimulating the cardiac muscle cells to contract in a coordinated manner to efficiently pump blood out of the heart.

Physiology of the Heart

At any given time the chambers of the heart may found in one of two states:

The cardiac cycle includes all of the events that take place during one heartbeat. There are 3 phases to the cardiac cycle: atrial systole, ventricular systole, and relaxation.

Blood Flow through the Heart

The electrocardiogram (also known as an EKG or ECG) is a non-invasive device that measures and monitors the electrical activity of the heart through the skin. The EKG produces a distinctive waveform in response to the electrical changes taking place within the heart.

The first part of the wave, called the P wave, is a small increase in voltage of about 0.1 mV that corresponds to the depolarization of the atria during atrial systole. The next part of the EKG wave is the QRS complex which features a small drop in voltage (Q) a large voltage peak (R) and another small drop in voltage (S). The QRS complex corresponds to the depolarization of the ventricles during ventricular systole. The atria also repolarize during the QRS complex, but have almost no effect on the EKG because they are so much smaller than the ventricles.

The final part of the EKG wave is the T wave, a small peak that follows the QRS complex. The T wave represents the ventricular repolarization during the relaxation phase of the cardiac cycle. Variations in the waveform and distance between the waves of the EKG can be used clinically to diagnose the effects of heart attacks, congenital heart problems, and electrolyte imbalances.

The sounds of a normal heartbeat are known as “lubb” and “dupp” and are caused by blood pushing on the valves of the heart. The “lubb” sound comes first in the heartbeat and is the longer of the two heart sounds. The “lubb” sound is produced by the closing of the AV valves at the beginning of ventricular systole. The shorter, sharper “dupp” sound is similarly caused by the closing of the semilunar valves at the end of ventricular systole. During a normal heartbeat, these sounds repeat in a regular pattern of lubb-dupp-pause. Any additional sounds such as liquid rushing or gurgling indicate a structure problem in the heart. The most likely causes of these extraneous sounds are defects in the atrial or ventricular septum or leakage in the valves.

Cardiac output (CO) is the volume of blood being pumped by the heart in one minute. The equation used to find cardiac output is: CO = Stroke Volume x Heart Rate

Stroke volume is the amount of blood pumped into the aorta during each ventricular systole, usually measured in milliliters. Heart rate is the number of heartbeats per minute. The average heart can push around 5 to 5.5 liters per minute at rest.

Heart disease is very common, disrupting the normal function of this important organ and often causing death. Visit our Diseases and Conditions section to learn more about common cardiovascular diseases and how we can prevent them. For information about your personal hereditary risks of a variety of conditions involving the heart (such as those arising from hemochromatosis or G6PDD, to name two very common hereditary disorders), learn more about DNA health testing.