The human lungs are a pair of large, spongy organs optimized for gas exchange between our blood and the air. Our bodies require oxygen in order to survive. The lungs provide us with that vital oxygen while also removing carbon dioxide before it can reach hazardous levels.

If the inner surface of the lungs could be stretched out flat, they would occupy an area of around 80 to 100 square meters — about the size of half of a tennis court! The lungs also provide us with the air we need in order to speak, laugh at jokes, and sing. Continue Scrolling To Read More Below... 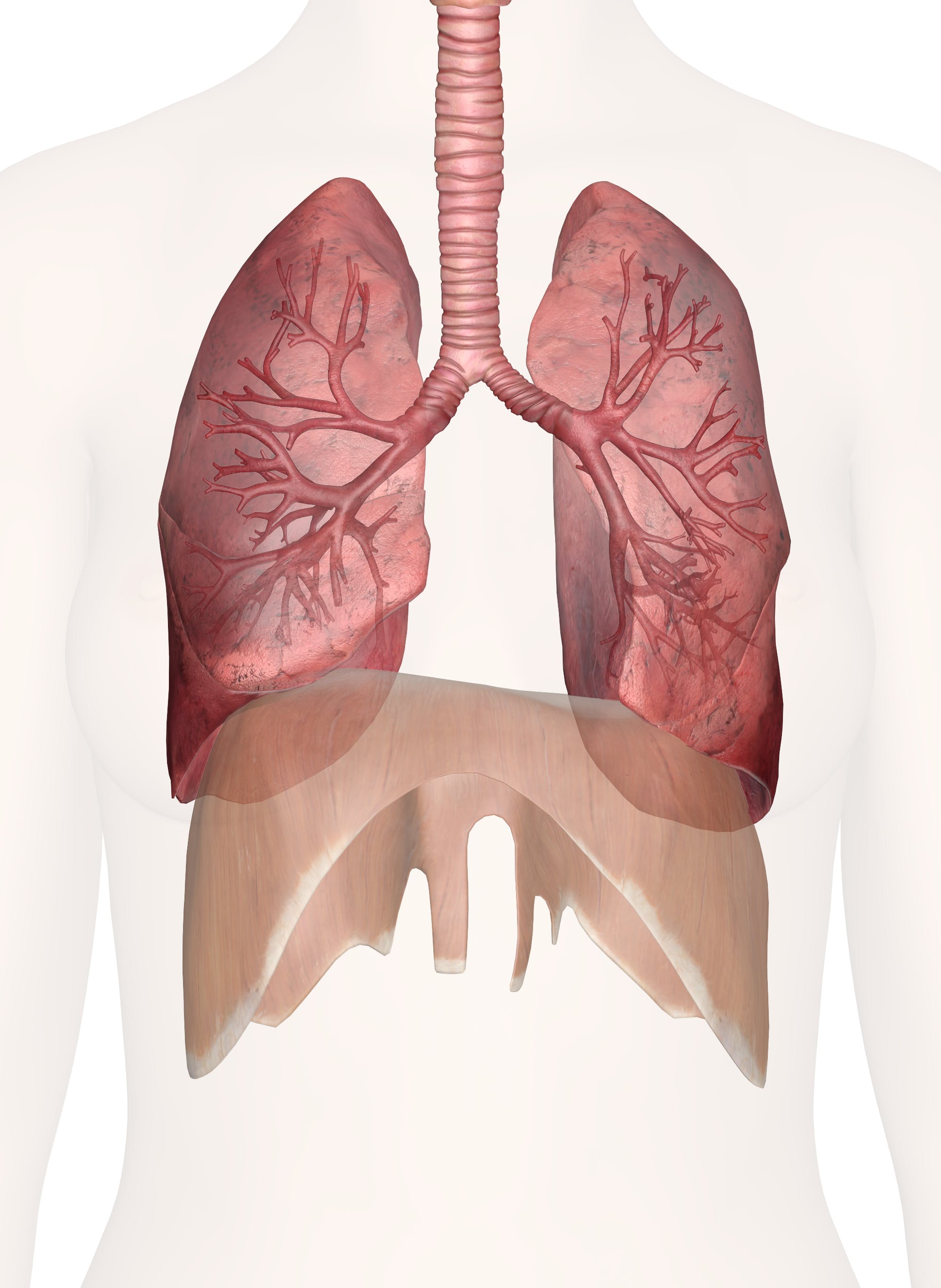 Anatomy of the Lungs

The left lung is slightly smaller than the right lung because 2/3 of the heart is located on the left side of the body. The left lung contains the cardiac notch, an indentation in the lung that surrounds the apex of the heart.

Air enters the body through the nose or mouth and passes through the pharynx, larynx, and trachea. Just before reaching the lungs, the trachea then splits into the left and right bronchi — large, hollow tubes made of hyaline cartilage and lined with ciliated pseudostratified epithelium. The hyaline cartilage of the bronchi forms incomplete rings shaped like the letter “C” with the open part of the ring facing toward the posterior end of the bronchi. The rigid hyaline cartilage prevents the bronchi from collapsing and blocking airflow to the lungs. Pseudostratified epithelium lines the inside of the hyaline ring and connects the unfinished ends of the ring to form a hollow tube shaped like the letter “D” with the flat part of the tube facing the posterior direction. Each lung receives air from a single, large primary bronchus.

The pseudostratified epithelium that lines the bronchi contains many cilia and goblet cells. Cilia are small hair-like cellular projections that extend from the surface of the cells. Goblet cells are specialized epithelial cells that secrete mucus to coat the lining of the bronchi. Cilia move together to push mucus secreted by the goblet cells away from the lungs. Particles of dust and even pathogens like viruses, bacteria, and mold in the air entering the lungs stick to the mucus and are carried out of the respiratory tract. In this way mucus helps to keep the lungs clean and free of disease.

Many small bronchioles branch off from the tertiary bronchi. Bronchioles differ from bronchi both in size (they are smaller) and in the composition of their walls. While bronchi have hyaline cartilage rings in their walls, bronchioles are made of elastin fibers and smooth muscle tissue. The tissue of the bronchiole walls allows the diameter of bronchioles to change to a significant degree. When the body requires greater volumes of air entering the lungs, such as during exercise, the bronchioles dilate to permit greater airflow. In response to dust or other environmental pollutants, the bronchioles can constrict to prevent the pollution of the lungs.

Alveoli are the functional units of the lungs that permit gas exchange between the air in the lungs and the blood in the capillaries of the lungs. Alveoli are found in small clusters called alveolar sacs at the end of the terminal bronchiole. Each alveolus is a hollow, cup-shaped cavity surrounded by many tiny capillaries.

Septal cells and macrophages are also found inside the alveoli. Septal cells produce alveolar fluid that coats the inner surface of the alveoli. Alveolar fluid is extremely important to lung function, as it is a surfactant that moistens the alveoli, helps maintain the elasticity of the lungs, and prevents the thin alveolar walls from collapsing. Macrophages in the alveoli keep the lungs clean and free of infections by capturing and phagocytizing pathogens and other foreign matter that enter the alveoli along with inhaled air.

Physiology of the Lungs

Our lungs receive air from the external environment through the process of negative pressure breathing. Negative pressure breathing requires a pressure differential between the air inside the alveoli and atmospheric air. Muscles surrounding the lungs, such as the diaphragm, intercostal muscles, and abdominal muscles, expand and contract to change the volume of the thoracic cavity. Muscles expand the thoracic cavity and decrease the pressure inside the alveoli to draw atmospheric air into the lungs. This process of drawing air into the lungs is known as inhalation or inspiration. Muscles can also contract the size of the thoracic cavity to increase the pressure inside of the alveoli and force air out of the lungs. This process of pushing air out of the lungs is known as exhalation or expiration.

The total air volume of the lungs is about 4 to 6 liters and varies with a person’s size, age, gender, and respiratory health. Lung volumes are measured clinically by a device known as a spirometer. Normal shallow breathing only moves a small fraction of the lungs’ total volume into and out of the body with each breath. This volume of air, known as tidal volume, usually measures only around 0.5 liters. Deep breathing can force more air into and out of the lungs than during shallow breathing. The volume of air exchanged during deep breathing is known as vital capacity and ranges between 3 to 5 liters, depending on the lung capacity of the individual. There is a residual volume of around 1 liter of air that remains in the lungs at all times, even during a deep exhalation. Fresh air entering the lungs with each breath mixes with the residual air in the lungs so that the residual air is slowly exchanged over time even at rest.

There are many diseases and conditions impairing the normal function of our lungs, even leading to death. Browse our section about respiratory diseases and conditions to learn more about common health problems like asthma and pneumonia. Also, you may be interested in learning more about how DNA health testing can screen you for genetic risk of an underdiagnosed hereditary condition called alpha-1 antitrypsin deficiency.