The sternocleidomastoid muscle, or SCM, is one of the larger and more superficial muscles in the neck, making it an important and easily identifiable anatomical landmark. Continue Scrolling To Read More Below... 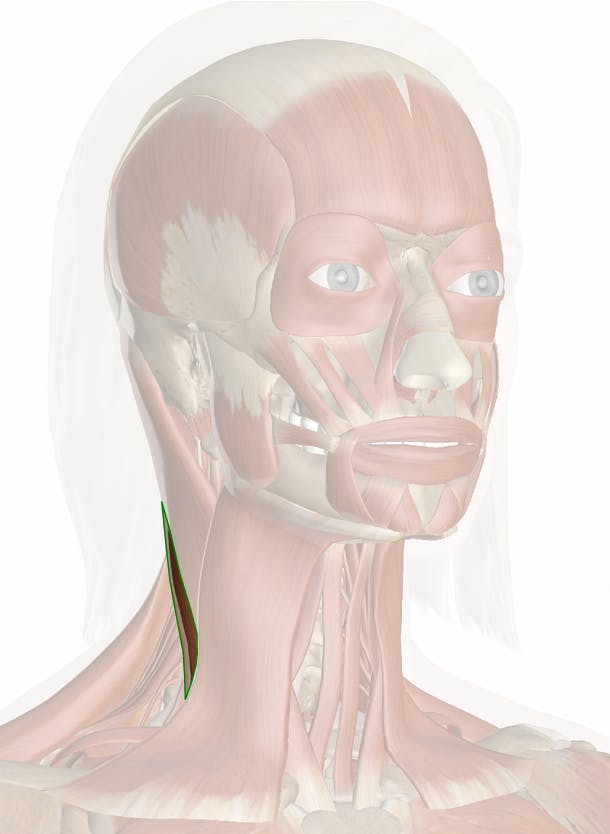 Continued From Above... It arises from two origins: the sternal head arises from the superior border of the manubrium of the sternum, while the clavicular head arises from a wide band on the superior edge of the clavicle. From these origins, the heads extend obliquely posteriorly and laterally across the neck where their fibers fuse into a single muscular body. The unified SCM continues to run posteriorly and laterally to insert at the mastoid process, a small mass of bony tissue on the temporal bone of the skull. The course of the SCM can be traced through palpation of the neck by turning one’s head to the side and feeling for a bulging muscle running from the sternum and clavicle and ending posterior to the ear.

The sternocleidomastoid muscles produce several motions within the neck, depending on whether one or both muscles are operating. When one SCM muscle contracts, it pulls the mastoid process towards its origins, pivoting of the head and turning the face toward the opposite side of the body. Both SCM muscles working together draw both mastoid processes towards the origins, resulting in flexion of the head toward the chest.

The sternocleidomastoid muscles can also work with the scalene muscles as muscles of deep respiration. When other muscles of the neck hold the head steady, the SCM muscles can pull the sternum and ribcage superiorly toward the neck. This elevation of the ribcage increases its volume, pulling more air into the lungs.

Strains of the SCM are common minor muscle injuries. Turning the head suddenly, whiplash, or sleeping with the neck in a strained position are some of the factors that can lead to SCM strain. While painful, this condition is not usually serious and can be treated with rest, massage, stretching, and NSAIDs.