The trachea (or windpipe) is a wide, hollow tube that connects the larynx (or voice box) to the bronchi of the lungs. It is an integral part of the body’s airway and has the vital function of providing air flow to and from the lungs for respiration.

The trachea begins at the inferior end of the larynx in the base of the neck. It is located along the body’s midline, anterior to the esophagus and just deep to the skin, so that it is possible to feel the larynx through the skin of the neck. From its origin at the larynx, the trachea extends inferiorly into the thorax posterior to the sternum. Continue Scrolling To Read More Below... 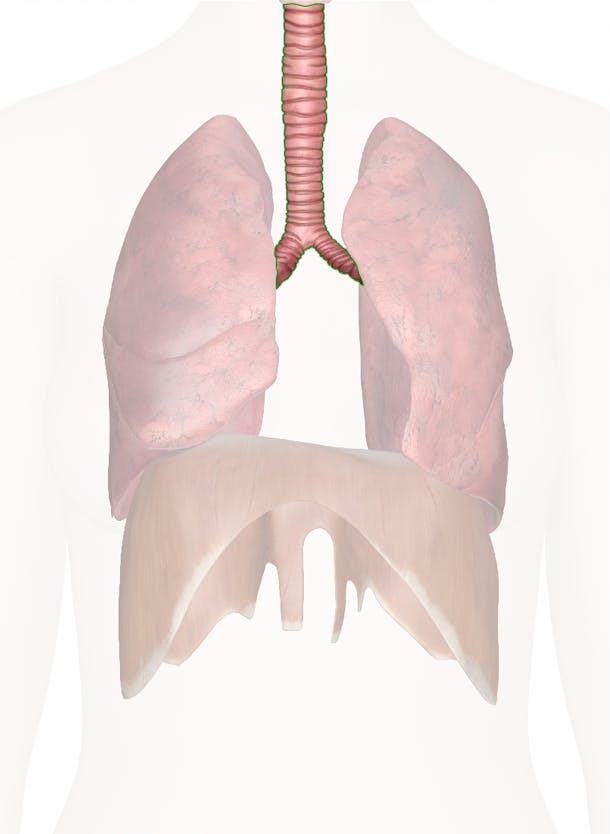 Continued From Above... In the thorax, the trachea ends where it splits into the left and right bronchi, which continue onward toward the lungs.

Four layers of tissues make up the walls of the trachea:

While the trachea plays a vital role as a passive air passageway, it also performs several other important functions as well. The trachealis muscle in the posterior wall allows the trachea to contract and reduce its diameter, which makes coughs more forceful and productive. During the process of swallowing food, the esophagus expands into the space normally occupied by the trachea. The incomplete cartilage rings of the trachea allow it to narrow and permit the esophagus to expand into its space. Finally, the loose connection of the adventitia allows the trachea to move within the neck and thorax, aiding the lungs in their expansion and contraction during breathing.