The intercostal muscles are a group of 22 pairs of tiny muscles found between the ribs. These muscles play a vital role in the movement of the chest during breathing. They also help to solidify the thoracic region and protect the lungs. 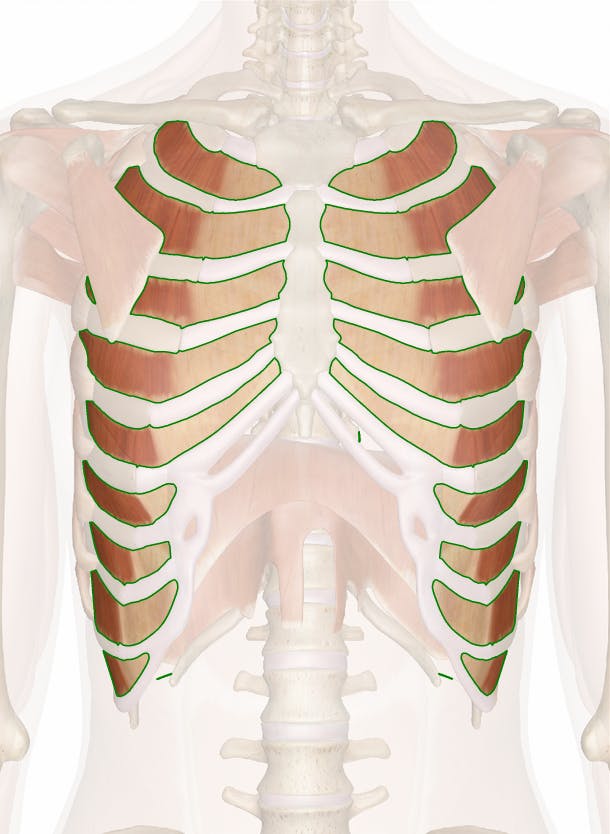 Continued From Above... Each rib is connected to the rib below it by both an external and internal intercostal muscle. The twelfth rib is the exception as it is the inferior-most rib.

The process of breathing consists of two parts: inhalation and exhalation. During deep inhalation, the size of the thoracic cavity is maximized to draw additional air into the lungs. The external intercostal muscles are stimulated during deep inhalation to lift and spread the ribs. Because the ribs are fixed on their posterior ends to the vertebral column, contraction of the external intercostals lifts the anterior end of the ribs like a handle on a bucket.

Deep exhalation works in a similar manner to deep inhalation, but instead uses the internal intercostal muscles to pull the ribs inferiorly and closer together. The compression of the ribs decreases the volume of the thoracic cavity, resulting in the forced exhalation of air from the lungs.