The gallbladder is a small storage organ located inferior and posterior to the liver. Though small in size, the gallbladder plays an important role in our digestion of food. The gallbladder holds bile produced in the liver until it is needed for digesting fatty foods in the duodenum of the small intestine. Bile in the gallbladder may crystallize and form gallstones, which can become painful and potentially life threatening. Continue Scrolling To Read More Below... 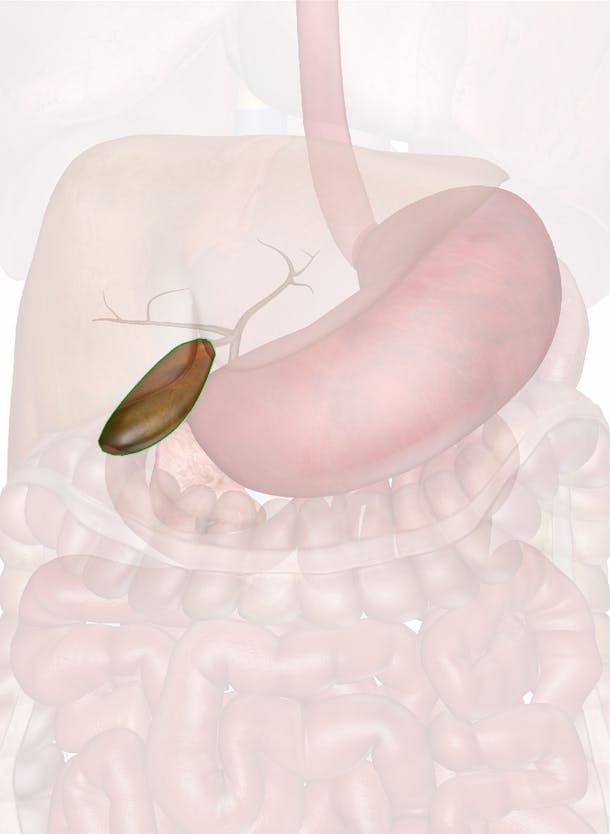 Anatomy of the Gallbladder

Hollow, muscular and pear-shaped, the gallbladder is a small organ — only about 3 inches in length and 1.5 inches in width at its widest point. The larger end of the gallbladder extends inferiorly and to the right while the tapered end points superiorly and medially. The tapered end of the gallbladder narrows into a small bile duct known as the cystic duct. The cystic duct connects to the common hepatic duct that carries bile from the liver. These ducts merge to form the common bile duct that extends to the wall of the duodenum.

Beneath the columnar tissue is a thin lamina propria layer made of connective tissue and capillaries that support and anchor the epithelial layer.

Deep to the lamina propria is the muscularis layer that contains smooth muscle tissue. Contraction of the muscularis pushes bile out of the gallbladder and into the cystic duct.

Surrounding the muscularis is a thin layer of fibrous connective tissue that helps to reinforce and strengthen the wall of the gallbladder.

Finally, the serosa forms the outermost layer of the gallbladder. The serosa is an epithelial layer that forms part of the peritoneum, or lining of the abdominal cavity. The serosa gives the gallbladder a smooth, slick surface to prevent friction between moving organs.

Physiology of the Gallbladder

Foods rich in proteins or fats are more difficult for the body to digest when compared to carbohydrate-rich foods (see Macronutrients). The walls of the duodenum contain sensory receptors that monitor the chemical makeup of chyme (partially digested food) that passes through the pyloric sphincter into the duodenum. When these cells detect proteins or fats, they respond by producing the hormone cholecystokinin (CCK). CCK enters the bloodstream and travels to the gallbladder where it stimulates the smooth muscle tissue in the walls of the gallbladder.

When CCK reaches the gallbladder, it triggers the smooth muscle tissue in the muscularis layer of the gallbladder to contract. The contraction of smooth muscle forces bile out of the gallbladder and into the cystic duct. From the cystic duct, bile enters the common bile duct and flows into the ampulla of Vater, where the bile ducts merge with the pancreatic duct. Bile then flows from the ampulla of Vater into the duodenum where it breaks the fats into smaller masses for easier digestion by the enzyme pancreatic lipase.

Gallstones are hard masses of bile salts, pigments, and cholesterol that develop within the gallbladder. These solid masses form when the components of bile crystallize. Growing slowly over many years as more crystallization occurs, gallstones may reach up to an inch in diameter.

Gallstones are most often treated by a cholecystectomy, the surgical removal of the gallbladder.