The pineal gland, also known as the pineal body, is an important endocrine gland that produces the hormone melatonin. Melatonin plays a key role in the sleep/wake cycle and the body’s response to sunlight.

The pineal gland is a small, pinecone-shaped mass of glandular tissue about 1/3 of an inch (8 mm) long. It is attached directly to the brain along the body’s midline at the union of the superior colliculi of the midbrain and the lobes of the thalamus. Continue Scrolling To Read More Below... 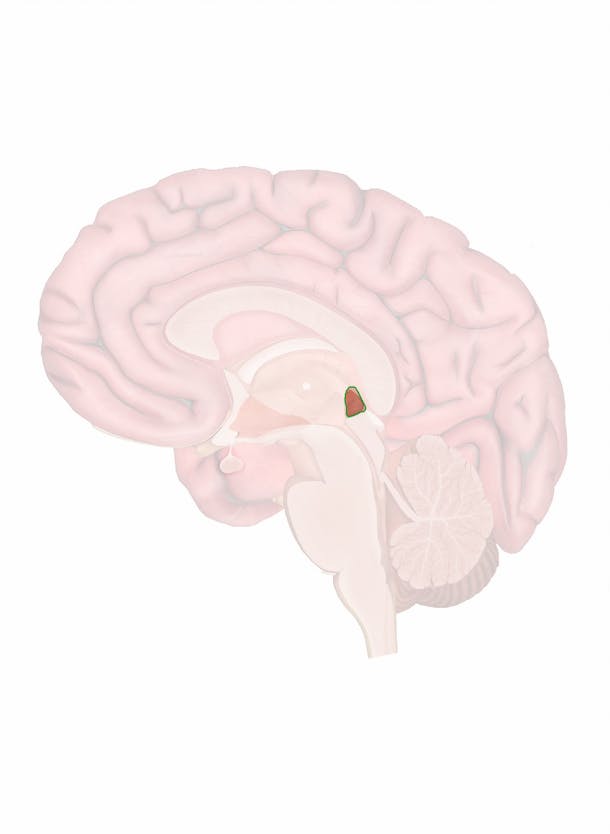 Continued From Above... From its base, the pineal gland tapers to a point as it extends posteriorly from the brain.

Despite being a gland, the pineal gland’s histology closely resembles the structure of nervous tissue, consisting mostly of astrocytes and pinealocytes surrounded by a layer of pia mater. Pia mater is the innermost layer of the meninges that covers the brain and spinal cord. It is made of a thin layer of fibrous connective tissue and contains many blood vessels that support the underlying tissues. Astrocytes are a type of neuroglia found in the central nervous system that support and protect neurons, but in the pineal gland they support the pinealocytes. Found only in the pineal gland, pinealoctyes are unique secretory cells that produce and secrete the hormone melatonin.

Despite its location in the brain, a long and very complex system of interactions is involved in the stimulation of the pineal gland. Light striking photoreceptor cells in the retina triggers the release of nerve signals to the brain to produce what we perceive as vision. The suprachiasmatic nuclei of the hypothalamus are stimulated by this nerve signal and work to inhibit, or turn off, the paraventricular nucleus of the hypothalamus. At night, in the absence of light, the paraventricular nucleus is no longer inhibited and begins to send nerve signals to sympathetic neurons in the spinal cord. From the spinal cord, these neurons send signals to the superior cervical ganglion in the neck, which delivers the neurotransmitter norepinephrine to stimulate pinealocytes in pineal gland.

Stimulation of the pinealocytes triggers the production and release of the hormone melatonin. Melatonin secreted by the pineal gland enters the bloodstream, where it flows to its target cells throughout the body. In the brain, it causes a sense of drowsiness that is associated with nighttime.