The immune and lymphatic systems are two closely related organ systems that share several organs and physiological functions. The immune system is our body’s defense system against infectious pathogenic viruses, bacteria, and fungi as well as parasitic animals and protists. The immune system works to keep these harmful agents out of the body and attacks those that manage to enter.

The lymphatic system is a system of capillaries, vessels, nodes and other organs that transport a fluid called lymph from the tissues as it returns to the bloodstream. The lymphatic tissue of these organs filters and cleans the lymph of any debris, abnormal cells, or pathogens. Continue Scrolling To Read More Below... 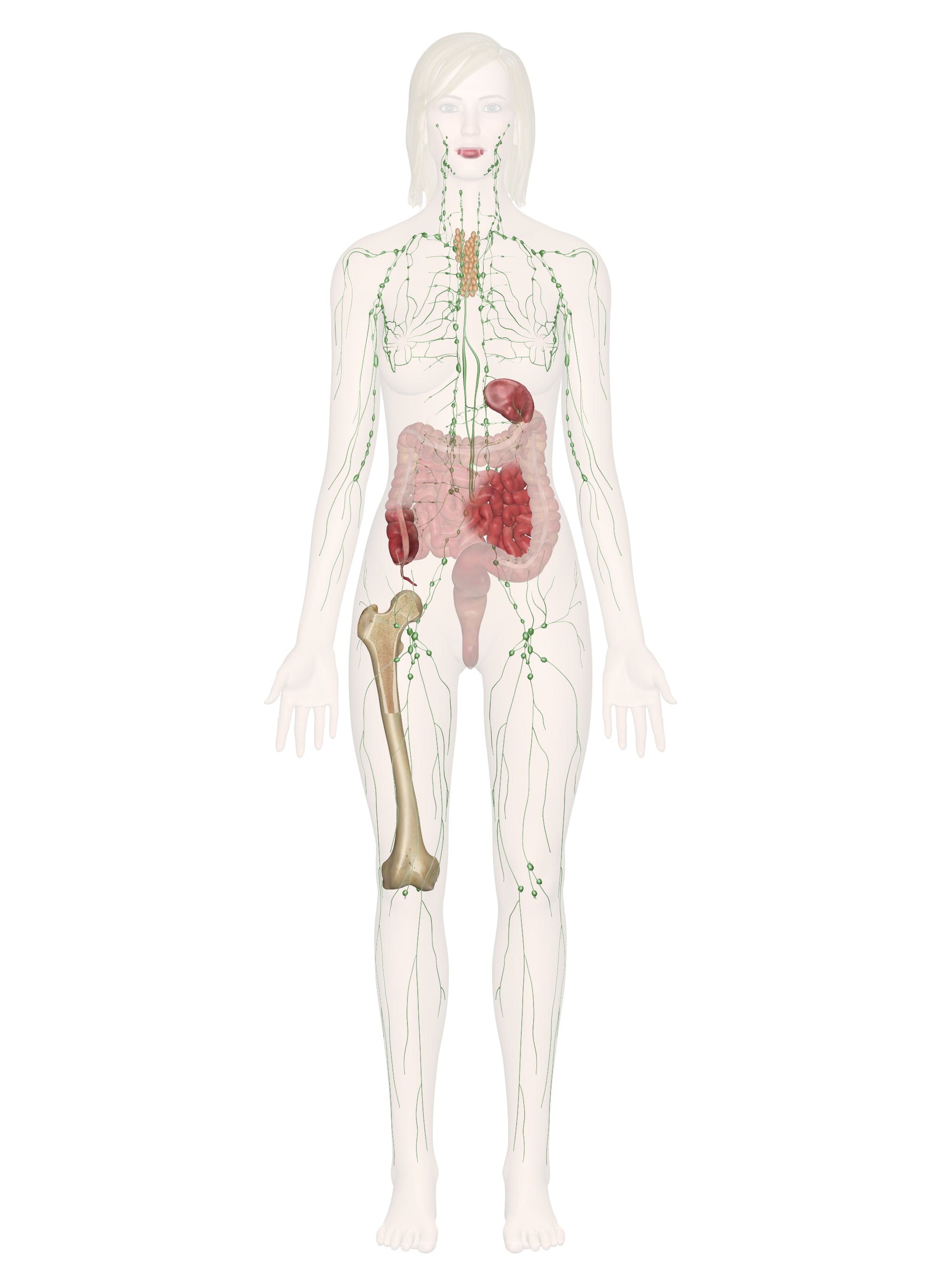 Continued From Above... The lymphatic system also transports fatty acids from the intestines to the circulatory system.

Monocytes are agranular leukocytes that can form 2 types of cells: macrophages and dendritic cells.

Granular Leukocytes include the following:

As blood passes through the tissues of the body, it enters thin-walled capillaries to facilitate diffusion of nutrients, gases, and wastes. Blood plasma also diffuses through the thin capillary walls and penetrates into the spaces between the cells of the tissues. Some of this plasma diffuses back into the blood of the capillaries, but a considerable portion becomes embedded in the tissues as interstitial fluid. To prevent the accumulation of excess fluids, small dead-end vessels called lymphatic capillaries extend into the tissues to absorb fluids and return them to circulation.

The interstitial fluid picked up by lymphatic capillaries is known as lymph. Lymph very closely resembles the plasma found in the veins: it is a mixture of about 90% water and 10% solutes such as proteins, cellular waste products, dissolved gases, and hormones. Lymph may also contain bacterial cells that are picked up from diseased tissues and the white blood cells that fight these pathogens. In late-stage cancer patients, lymph often contains cancerous cells that have metastasized from tumors and may form new tumors within the lymphatic system. A special type of lymph, known as chyle, is produced in the digestive system as lymph absorbs triglycerides from the intestinal villi. Due to the presence of triglycerides, chyle has a milky white coloration to it.

Lymph nodes are small, kidney-shaped organs of the lymphatic system. There are several hundred lymph nodes found mostly throughout the thorax and abdomen of the body with the highest concentrations in the axillary (armpit) and inguinal (groin) regions. The outside of each lymph node is made of a dense fibrous connective tissue capsule. Inside the capsule, the lymph node is filled with reticular tissue containing many lymphocytes and macrophages. The lymph nodes function as filters of lymph that enters from several afferent lymph vessels. The reticular fibers of the lymph node act as a net to catch any debris or cells that are present in the lymph. Macrophages and lymphocytes attack and kill any microbes caught in the reticular fibers. Efferent lymph vessels then carry the filtered lymph out of the lymph node and towards the lymphatic ducts.

All of the lymphatic vessels of the body carry lymph toward the 2 lymphatic ducts: the thoracic duct and the right lymphatic ducts. These ducts serve to return lymph back to the venous blood supply so that it can be circulated as plasma.

Outside of the system of lymphatic vessels and lymph nodes, there are masses of non-encapsulated lymphatic tissue known as lymphatic nodules. The lymphatic nodules are associated with the mucous membranes of the body, where they work to protect the body from pathogens entering the body through open body cavities.

One of the primary functions of the lymphatic system is the movement of interstitial fluid from the tissues to the circulatory system. Like the veins of the circulatory system, lymphatic capillaries and vessels move lymph with very little pressure to help with circulation. To help move lymph towards the lymphatic ducts, there is a series of many one-way check valves found throughout the lymphatic vessels. These check valves allow lymph to move toward the lymphatic ducts and close when lymph attempts to flow away from the ducts. In the limbs, skeletal muscle contraction squeezes the walls of lymphatic vessels to push lymph through the valves and towards the thorax. In the trunk, the diaphragm pushes down into the abdomen during inhalation. This increased abdominal pressure pushes lymph into the less pressurized thorax. The pressure gradient reverses during exhalation, but the check valves prevent lymph from being pushed backwards.

Another major function of the lymphatic system is the transportation of fatty acids from the digestive system. The digestive system breaks large macromolecules of carbohydrates, proteins, and lipids into smaller nutrients that can be absorbed through the villi of the intestinal wall. Most of these nutrients are absorbed directly into the bloodstream, but most fatty acids, the building blocks of fats, are absorbed through the lymphatic system.

In the villi of the small intestine are lymphatic capillaries called lacteals. Lacteals are able to absorb fatty acids from the intestinal epithelium and transport them along with lymph. The fatty acids turn the lymph into a white, milky substance called chyle. Chyle is transported through lymphatic vessels to the thoracic duct where it enters the bloodstream and travels to the liver to be metabolized.

The body employs many different types of immunity to protect itself from infection from a seemingly endless supply of pathogens. These defenses may be external and prevent pathogens from entering the body. Conversely, internal defenses fight pathogens that have already entered the body. Among the internal defenses, some are specific to only one pathogen or may be innate and defend against many pathogens. Some of these specific defenses can be acquired to preemptively prevent an infection before a pathogen enters the body.

The body has many innate ways to defend itself against a broad spectrum of pathogens. These defenses may be external or internal defenses.

External defenses include the following:

In response to an infection, the body may start a fever by raising its internal temperature out of its normal homeostatic range. Fevers help to speed up the body’s response system to an infection while at the same time slowing the reproduction of the pathogen.

Natural killer (NK) cells are special lymphocytes that are able to recognize and kill virus-infected cells and tumor cells. NK cells check the surface markers on the surface of the body’s cells, looking for cells that are lacking the correct number of markers due to disease. The NK cells then kill these cells before they can spread infection or cancer.

The term phagocyte means “eating cell” and refers to a group of cell types including neutrophils and macrophages. A phagocyte engulfs pathogens with its cell membrane before using digestive enzymes to kill and dissolve the cell into its chemical parts. Phagocytes are able to recognize and consume many different types of cells, including dead or damaged body cells.

When a pathogen infects the body, it often encounters macrophages and dendritic cells of the innate immune system. These cells can become antigen-presenting cells (APCs) by consuming and processing pathogenic antigens. The APCs travel into the lymphatic system carrying these antigens to be presented to the T cells and B cells of the specific immune system.

Inactive T cells are found in lymphatic tissue awaiting infection by a pathogen. Certain T cells have antigen receptors that recognize the pathogen but do not reproduce until they are triggered by an APC. The activated T cell begins reproducing very quickly to form an army of active T cells that spread through the body and fight the pathogen. Cytotoxic T cells directly attach to and kill pathogens and virus-infected cells using powerful toxins. Helper T cells assist in the immune response by stimulating the response of B cells and macrophages.

After an infection has been fought off, memory T cells remain in the lymphatic tissue waiting for a new infection by cells presenting the same antigen. The response by memory T cells to the antigen is much faster than that of the inactive T cells that fought the first infection. The increase in T cell reaction speed leads to immunity—the reintroduction of the same pathogen is fought off so quickly that there are few or no symptoms. This immunity may last for years or even an entire lifetime.

During an infection, the APCs that travel to the lymphatic system to stimulate T cells also stimulate B cells. B cells are lymphocytes that are found in lymphatic tissues of the body that produce antibodies to fight pathogens (instead of traveling through the body themselves). Once a B cell has been contacted by an APC, it processes the antigen to produce an MHC-antigen complex. Helper T cells present in the lymphatic system bind to the MHC-antigen complex to stimulate the B cell to become active. The active B cell begins to reproduce and produce 2 types of cells: plasma cells and memory B cells.

Antibodies are proteins that are specific to and bind to a particular antigen on a cell or virus. Once antibodies have latched on to a cell or virus, they make it harder for their target to move, reproduce, and infect cells. Antibodies also make it easier and more appealing for phagocytes to consume the pathogen.

Under most circumstances, immunity is developed throughout a lifetime by the accumulation of memory T and B cells after an infection. There are a few ways that immunity can be acquired without exposure to a pathogen. Immunization is the process of introducing antigens from a virus or bacterium to the body so that memory T and B cells are produced to prevent an actual infection. Most immunizations involve the injection of bacteria or viruses that have been inactivated or weakened. Newborn infants can also acquire some temporary immunity from infection thanks to antibodies that are passed on from their mother. Some antibodies are able to cross the placenta from the mother’s blood and enter the infant’s bloodstream. Other antibodies are passed through breast milk to protect the infant.