The palatine tonsils are masses of lymphoid tissue in the pharynx posterior to the mouth. Along with the lingual tonsils and pharyngeal tonsil (adenoid), the palatine tonsils help the body’s immune system fight off infections. Some infections may cause tonsillitis, or the inflammation of the tonsils, which may require surgical intervention.

The palatine tonsils are two roughly spherical masses of lymphoid tissue protruding from the lateral surfaces of the oropharynx. They are intricately twisted with several deep ravines known as crypts penetrating their interior. The surface of each tonsil is covered with non-keratinized stratified squamous epithelial tissue, the same kind of tissue covering the surface of the oropharynx and the crypts’ lining. A special type of epithelial cell, known as a microfold cell (or M cell), is present in the epithelium of the tonsils and plays a unique role in detecting pathogens.

The interior of the palatine tonsils is filled with connective tissues and lymphatic tissue. Many tough collagen fibers in the connective tissues structure the tonsils, while blood vessels and nerves provide nutrient and nerve signal transport. The lymphatic tissue is further divided into mucosa-associated lymphatic tissue (MALT) and lymphatic follicles. MALT tissue is found deep in the epithelium and is closely associated with the epithelium covering the tonsils. Lymphatic follicles are small, spherical masses found deep within the MALT and contain regions known as germinal centers where new B lymphocytes are produced.

The palatine tonsils, along with the other tonsils and Peyer’s patches of the small intestine, are small organs lining the mucosa that contain MALT. These MALT-containing organs help prevent infections caused by pathogens passing through the cavities lined with mucosa. The palatine tonsils are in the oropharynx, where air from the nose passes on its way to the lungs and food from the mouth passes on its way to the stomach. Any pathogens, such as a virus or bacterium, present in the air or food pass over the palatine tonsils, where M cells absorb them and pass them into the MALT tissue. Those pathogens are digested, and their antigens trigger T lymphocytes to activate B lymphocytes in the lymphatic follicles, producing antibodies to kill the pathogens and prevent the spread of the infection. New B lymphocytes are produced as needed to fight infections in the germinal centers in the center of the tonsils.

Infections of the throat, including colds and strep throat, often attack the tonsils and trigger the immune system to induce swelling of the lymphatic tissue of the tonsils. This swelling, known as tonsillitis, is often acute and reduces after the body fights off the infection. Severe or chronic tonsillitis may be treated by a corticosteroid to reduce inflammation or by tonsillectomy, a surgical procedure where the tonsils are removed. However, removal of the tonsils prevents them from producing their desired immune system effects. 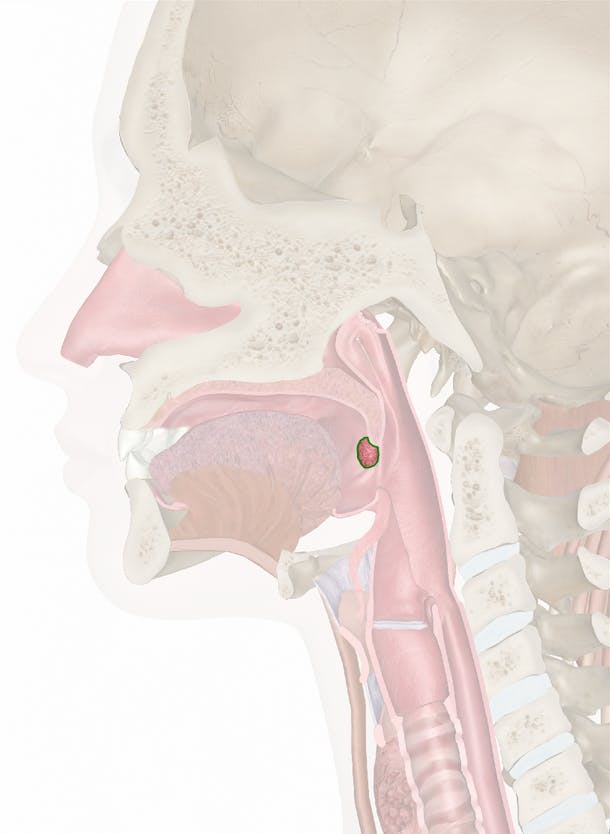