Immune and Lymphatic Systems of the Upper Torso

The upper torso contains many important structures of the lymphatic and immune systems including many lymph nodes, the lymphatic ducts, thymus gland, and red bone marrow. These structures work together to perform the vital functions of producing immune responses to deadly pathogens; producing blood cells; transporting lymph and lipids; and filtering contaminants from lymph.

A vast network of lymph nodes and lymphatic vessels spreads throughout the diverse tissues of the upper torso. Continue Scrolling To Read More Below... 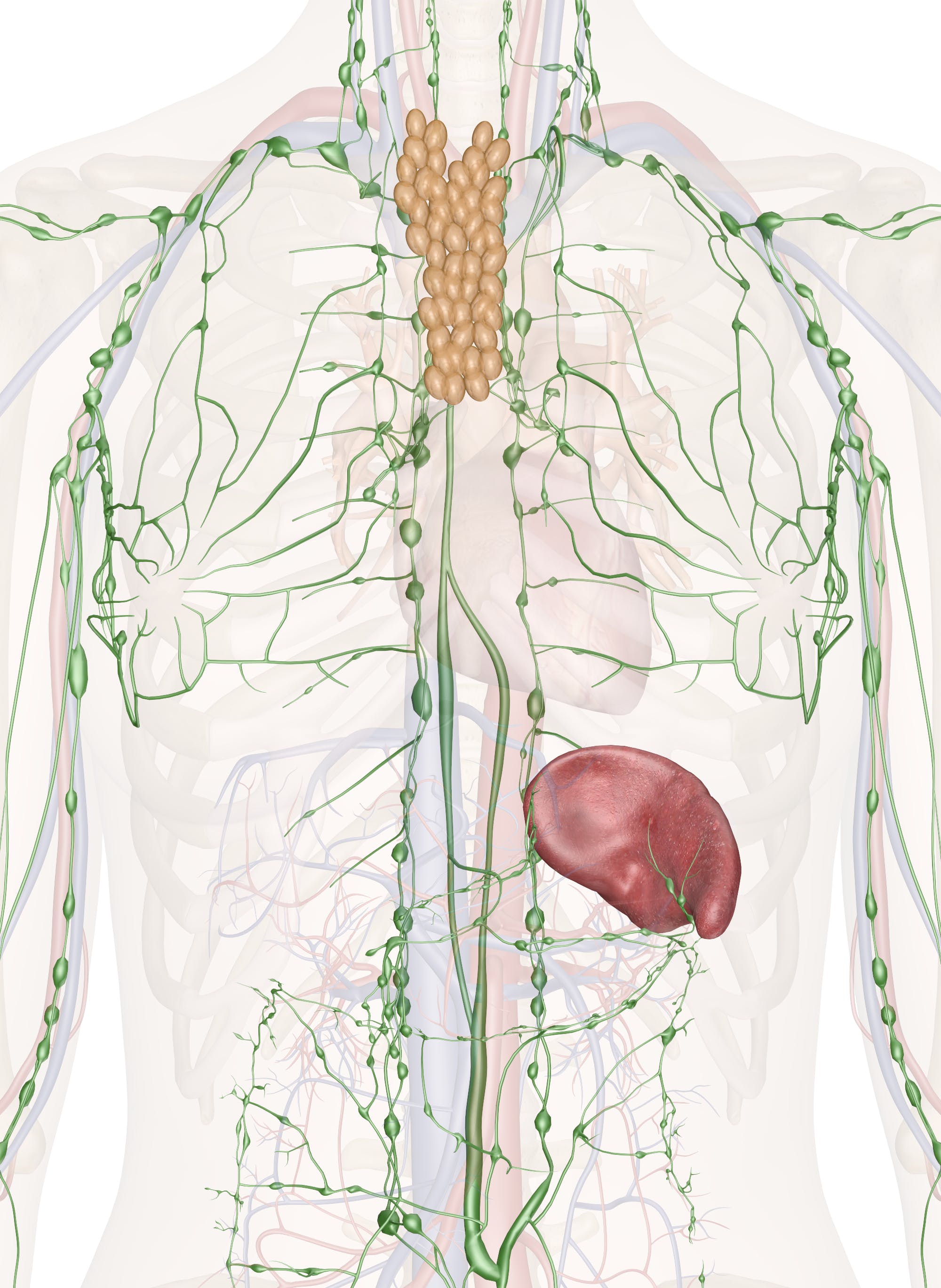 Continued From Above... This lymphatic network performs the vital task of draining interstitial fluid from the tissues of the thorax and returning it to the blood supply. Many lymphatic vessels also carry lymph to the upper torso from the limbs, abdomen, head and neck.

Interstitial fluid is produced in the body’s tissues from blood plasma that has leaked out of capillaries and fills the spaces between cells in every tissue of the body. In the tissues it picks up many substances surrounding the cells, including waste products, cellular debris, pathogens, and even tumor cells. Interstitial fluid is absorbed by tiny lymphatic capillaries in the tissues, forming the fluid known as lymph. Any solid matter, including bacteria, pieces of dead cells, and tumor cells are trapped by the lymph nodes and prevented from spreading through the body.

Several major groups of lymph nodes are found in the upper torso.

As lymph exits a lymph node, it often passes through a series of short lymphatic vessels and additional lymph nodes to complete the filtration process. The chain of lymph nodes ends where several chains combine to form a larger vessel known as a lymphatic trunk. Three pairs of lymphatic trunks carry lymph through the upper torso:

In addition to the structures of the lymphatic system, the bones of the upper torso play an important role in the immune system by producing blood cells, including leukocytes (white blood cells), in their red bone marrow. Red bone marrow contains many stem cells that constantly divide to create new leukocytes. These leukocytes further differentiate into the macrophages, granular leukocytes, and lymphocytes that clean up dead cells and debris in the body and fight pathogens.

Finally, the upper torso also contains the thymus gland, a vital part of the immune system. The thymus gland acts as the training grounds for T lymphocytes that are major combatants in the immune response. T cells are created in the red bone marrow and are transported to the thymus during childhood. There, they are trained to differentiate between the body’s own cells and dangerous pathogens. Once they have been trained, the T cells alert the body to the invasion of foreign cells; attack these foreign cells; and send signals to the B lymphocytes to produce antibodies.