Weighing in at around 3 pounds, the liver is the body’s second largest organ; only the skin is larger and heavier. The liver performs many essential functions related to digestion, metabolism, immunity, and the storage of nutrients within the body. These functions make the liver a vital organ without which the tissues of the body would quickly die from lack of energy and nutrients. Fortunately, the liver has an incredible capacity for regeneration of dead or damaged tissues; it is capable Continue Scrolling To Read More Below... 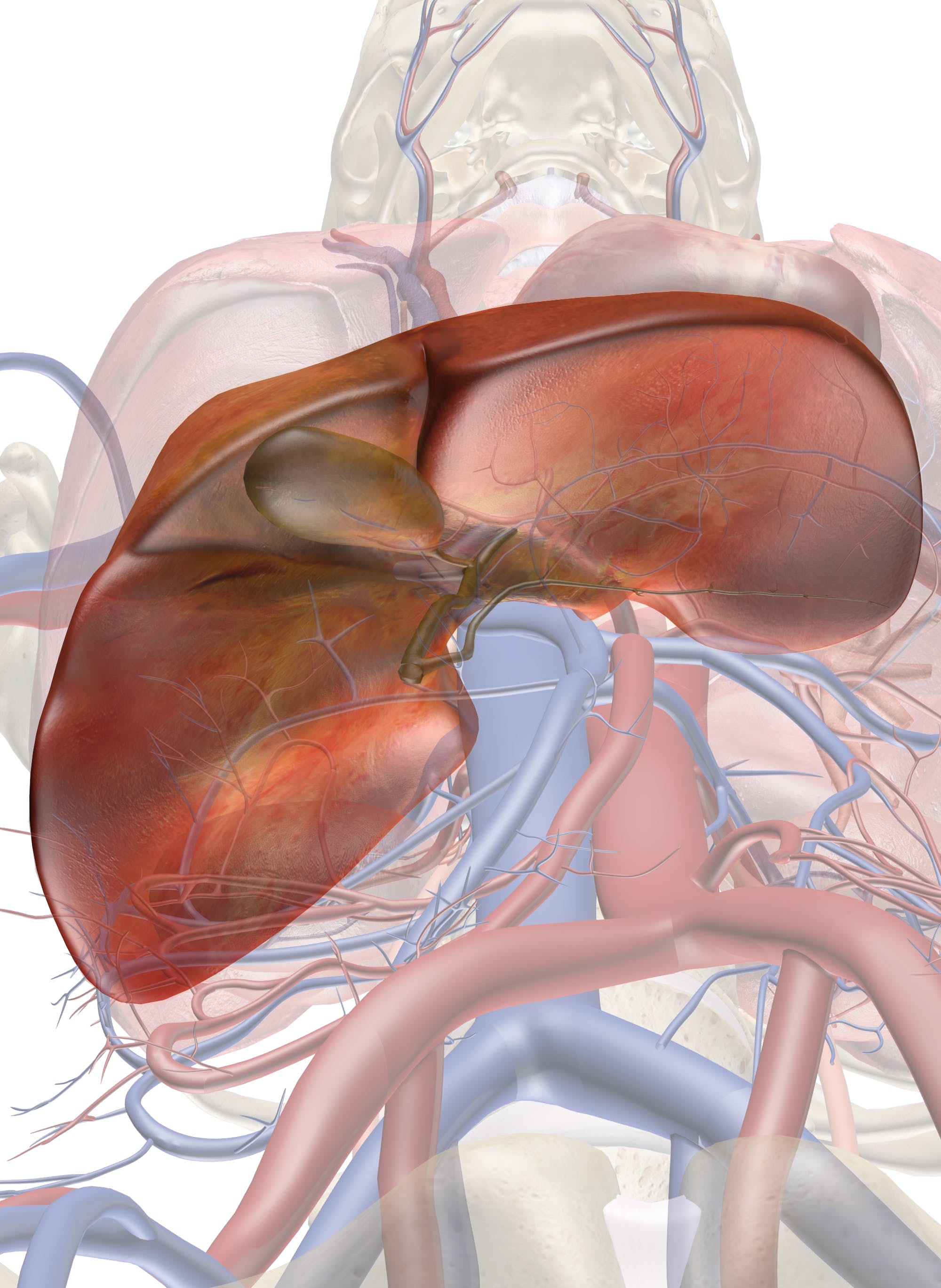 Continued From Above... of growing as quickly as a cancerous tumor to restore its normal size and function.

Anatomy of the Liver

The liver is a roughly triangular organ that extends across the entire abdominal cavity just inferior to the diaphragm. Most of the liver’s mass is located on the right side of the body where it descends inferiorly toward the right kidney. The liver is made of very soft, pinkish-brown tissues encapsulated by a connective tissue capsule. This capsule is further covered and reinforced by the peritoneum of the abdominal cavity, which protects the liver and holds it in place within the abdomen.

The peritoneum connects the liver in 4 locations: the coronary ligament, the left and right triangular ligaments, and the falciform ligament. These connections are not true ligaments in the anatomical sense; rather, they are condensed regions of peritoneal membrane that support the liver.

The liver consists of 4 distinct lobes — the left, right, caudate, and quadrate lobes.

The internal structure of the liver is made of around 100,000 small hexagonal functional units known as lobules. Each lobule consists of a central vein surrounded by 6 hepatic portal veins and 6 hepatic arteries. These blood vessels are connected by many capillary-like tubes called sinusoids, which extend from the portal veins and arteries to meet the central vein like spokes on a wheel.

Physiology of the Liver

The liver plays an active role in the process of digestion through the production of bile. Bile is a mixture of water, bile salts, cholesterol, and the pigment bilirubin. Hepatocytes in the liver produce bile, which then passes through the bile ducts to be stored in the gallbladder. When food containing fats reaches the duodenum, the cells of the duodenum release the hormone cholecystokinin to stimulate the gallbladder to release bile. Bile travels through the bile ducts and is released into the duodenum where it emulsifies large masses of fat. The emulsification of fats by bile turns the large clumps of fat into smaller pieces that have more surface area and are therefore easier for the body to digest.

Bilirubin present in bile is a product of the liver’s digestion of worn out red blood cells. Kupffer cells in the liver catch and destroy old, worn out red blood cells and pass their components on to hepatocytes. Hepatocytes metabolize hemoglobin, the red oxygen-carrying pigment of red blood cells, into the components heme and globin. Globin protein is further broken down and used as an energy source for the body. The iron-containing heme group cannot be recycled by the body and is converted into the pigment bilirubin and added to bile to be excreted from the body. Bilirubin gives bile its distinctive greenish color. Intestinal bacteria further convert bilirubin into the brown pigment stercobilin, which gives feces their brown color.

The hepatocytes of the liver are tasked with many of the important metabolic jobs that support the cells of the body. Because all of the blood leaving the digestive system passes through the hepatic portal vein, the liver is responsible for metabolizing carbohydrate, lipids, and proteins into biologically useful materials.

Our digestive system breaks down carbohydrates into the monosaccharide glucose, which cells use as a primary energy source. Blood entering the liver through the hepatic portal vein is extremely rich in glucose from digested food. Hepatocytes absorb much of this glucose and store it as the macromolecule glycogen, a branched polysaccharide that allows the hepatocytes to pack away large amounts of glucose and quickly release glucose between meals. The absorption and release of glucose by the hepatocytes helps to maintain homeostasis and protects the rest of the body from dangerous spikes and drops in the blood glucose level. (See more about glucose in the body.)

Fatty acids in the blood passing through the liver are absorbed by hepatocytes and metabolized to produce energy in the form of ATP. Glycerol, another lipid component, is converted into glucose by hepatocytes through the process of gluconeogenesis. Hepatocytes can also produce lipids like cholesterol, phospholipids, and lipoproteins that are used by other cells throughout the body. Much of the cholesterol produced by hepatocytes gets excreted from the body as a component of bile.

Dietary proteins are broken down into their component amino acids by the digestive system before being passed on to the hepatic portal vein. Amino acids entering the liver require metabolic processing before they can be used as an energy source. Hepatocytes first remove the amine groups of the amino acids and convert them into ammonia and eventually urea. Urea is less toxic than ammonia and can be excreted in urine as a waste product of digestion. The remaining parts of the amino acids can be broken down into ATP or converted into new glucose molecules through the process of gluconeogenesis.

As blood from the digestive organs passes through the hepatic portal circulation, the hepatocytes of the liver monitor the contents of the blood and remove many potentially toxic substances before they can reach the rest of the body. Enzymes in hepatocytes metabolize many of these toxins such as alcohol and drugs into their inactive metabolites. And in order to keep hormone levels within homeostatic limits, the liver also metabolizes and removes from circulation hormones produced by the body’s own glands.

The liver provides storage of many essential nutrients, vitamins, and minerals obtained from blood passing through the hepatic portal system. Glucose is transported into hepatocytes under the influence of the hormone insulin and stored as the polysaccharide glycogen. Hepatocytes also absorb and store fatty acids from digested triglycerides. The storage of these nutrients allows the liver to maintain the homeostasis of blood glucose. Our liver also stores vitamins and minerals - such as vitamins A, D, E, K, and B12, and the minerals iron and copper - in order to provide a constant supply of these essential substances to the tissues of the body.

Unfortunately, one common hereditary disorder called hemochromatosis causes the liver to store too much iron, potentially leading to liver disease. Modern DNA health testing can help you find out if you are genetically at higher risk of acquiring this condition or others like Gaucher disease ad alpha-1 antitrypsin deficiency, all of which increase your risk of developing liver disease.

The liver is responsible for the production of several vital protein components of blood plasma: prothrombin, fibrinogen, and albumins. Prothrombin and fibrinogen proteins are coagulation factors involved in the formation of blood clots. Albumins are proteins that maintain the isotonic environment of the blood so that cells of the body do not gain or lose water in the presence of body fluids.

The liver functions as an organ of the immune system through the function of the Kupffer cells that line the sinusoids. Kupffer cells are a type of fixed macrophage that form part of the mononuclear phagocyte system along with macrophages in the spleen and lymph nodes. Kupffer cells play an important role by capturing and digesting bacteria, fungi, parasites, worn-out blood cells, and cellular debris. The large volume of blood passing through the hepatic portal system and the liver allows Kupffer cells to clean large volumes of blood very quickly.