The female reproductive system includes the ovaries, fallopian tubes, uterus, vagina, vulva, mammary glands and breasts. These organs are involved in the production and transportation of gametes and the production of sex hormones. The female reproductive system also facilitates the fertilization of ova by sperm and supports the development of offspring during pregnancy and infancy. Continue Scrolling To Read More Below... 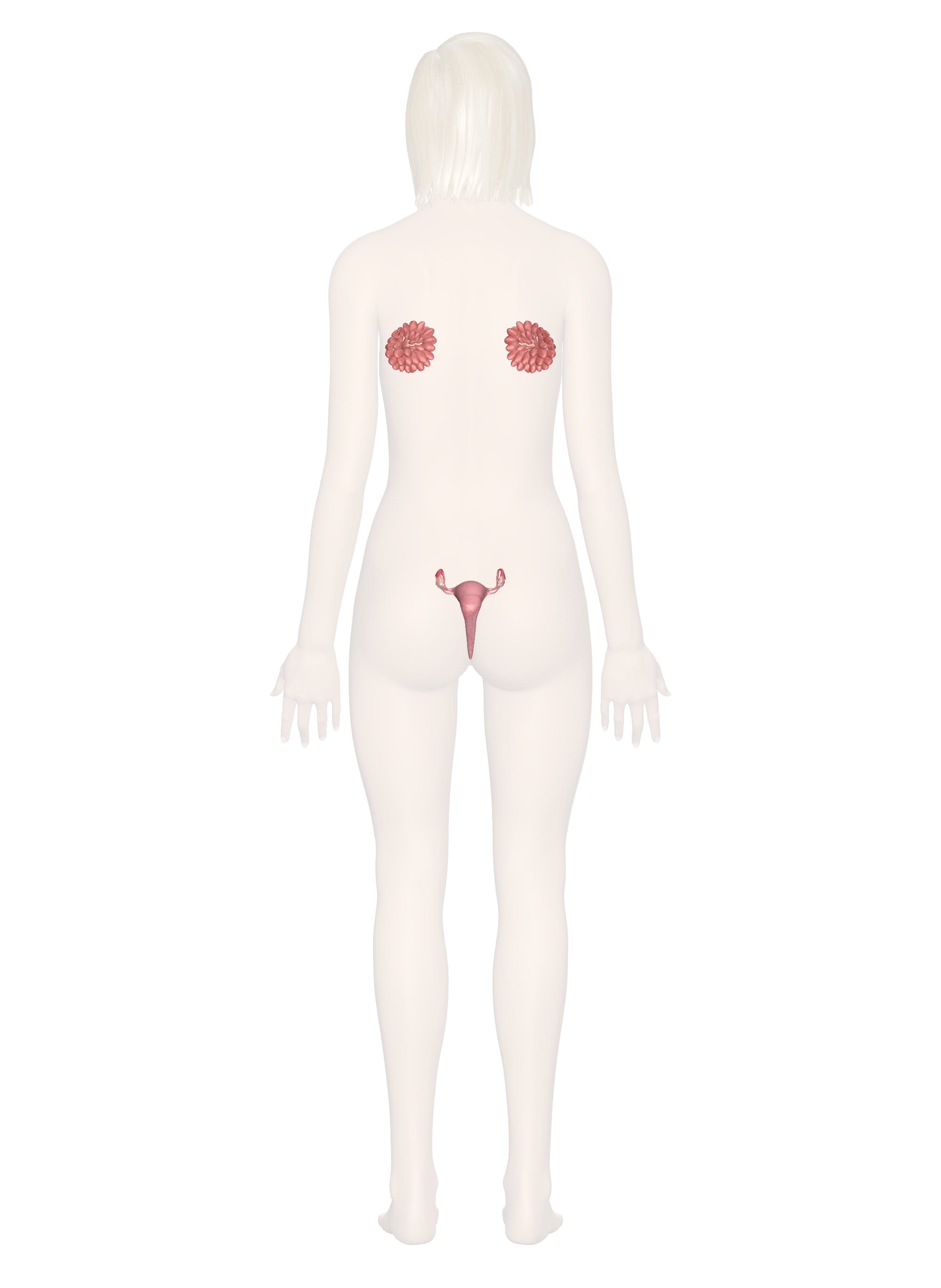 The ovaries are a pair of small glands about the size and shape of almonds, located on the left and right sides of the pelvic body cavity lateral to the superior portion of the uterus. Ovaries produce female sex hormones such as estrogen and progesterone as well as ova (commonly called “eggs”), the female gametes. Ova are produced from oocyte cells that slowly develop throughout a woman’s early life and reach maturity after puberty. Each month during ovulation, a mature ovum is released. The ovum travels from the ovary to the fallopian tube, where it may be fertilized before reaching the uterus.

The fallopian tubes are a pair of muscular tubes that extend from the left and right superior corners of the uterus to the edge of the ovaries. The fallopian tubes end in a funnel-shaped structure called the infundibulum, which is covered with small finger-like projections called fimbriae. The fimbriae swipe over the outside of the ovaries to pick up released ova and carry them into the infundibulum for transport to the uterus. The inside of each fallopian tube is covered in cilia that work with the smooth muscle of the tube to carry the ovum to the uterus.

The uterus is a hollow, muscular, pear-shaped organ located posterior and superior to the urinary bladder. Connected to the two fallopian tubes on its superior end and to the vagina (via the cervix) on its inferior end, the uterus is also known as the womb, as it surrounds and supports the developing fetus during pregnancy. The inner lining of the uterus, known as the endometrium, provides support to the embryo during early development. The visceral muscles of the uterus contract during childbirth to push the fetus through the birth canal.

The vagina is an elastic, muscular tube that connects the cervix of the uterus to the exterior of the body. It is located inferior to the uterus and posterior to the urinary bladder. The vagina functions as the receptacle for the penis during sexual intercourse and carries sperm to the uterus and fallopian tubes. It also serves as the birth canal by stretching to allow delivery of the fetus during childbirth. During menstruation, the menstrual flow exits the body via the vagina.

The vulva is the collective name for the external female genitalia located in the pubic region of the body. The vulva surrounds the external ends of the urethral opening and the vagina and includes the mons pubis, labia majora, labia minora, and clitoris. The mons pubis, or pubic mound, is a raised layer of adipose tissue between the skin and the pubic bone that provides cushioning to the vulva. The inferior portion of the mons pubis splits into left and right halves called the labia majora. The mons pubis and labia majora are covered with pubic hairs. Inside of the labia majora are smaller, hairless folds of skin called the labia minora that surround the vaginal and urethral openings. On the superior end of the labia minora is a small mass of erectile tissue known as the clitoris that contains many nerve endings for sensing sexual pleasure.

The breasts are specialized organs of the female body that contain mammary glands, milk ducts, and adipose tissue. The two breasts are located on the left and right sides of the thoracic region of the body. In the center of each breast is a highly pigmented nipple that releases milk when stimulated. The areola, a thickened, highly pigmented band of skin that surrounds the nipple, protects the underlying tissues during breastfeeding. The mammary glands are a special type of sudoriferous glands that have been modified to produce milk to feed infants. Within each breast, 15 to 20 clusters of mammary glands become active during pregnancy and remain active until milk is no longer needed. The milk passes through milk ducts on its way to the nipple, where it exits the body.

Under the influence of follicle stimulating hormone (FSH), and luteinizing hormone (LH), the ovaries produce a mature ovum in a process known as ovulation. By about 14 days into the reproductive cycle, an oocyte reaches maturity and is released as an ovum. Although the ovaries begin to mature many oocytes each month, usually only one ovum per cycle is released.

Once the mature ovum is released from the ovary, the fimbriae catch the egg and direct it down the fallopian tube to the uterus. It takes about a week for the ovum to travel to the uterus. If sperm are able to reach and penetrate the ovum, the ovum becomes a fertilized zygote containing a full complement of DNA. After a two-week period of rapid cell division known as the germinal period of development, the zygote forms an embryo. The embryo will then implant itself into the uterine wall and develop there during pregnancy.

While the ovum matures and travels through the fallopian tube, the endometrium grows and develops in preparation for the embryo. If the ovum is not fertilized in time or if it fails to implant into the endometrium, the arteries of the uterus constrict to cut off blood flow to the endometrium. The lack of blood flow causes cell death in the endometrium and the eventual shedding of tissue in a process known as menstruation. In a normal menstrual cycle, this shedding begins around day 28 and continues into the first few days of the new reproductive cycle.

If the ovum is fertilized by a sperm cell, the fertilized embryo will implant itself into the endometrium and begin to form an amniotic cavity, umbilical cord, and placenta. For the first 8 weeks, the embryo will develop almost all of the tissues and organs present in the adult before entering the fetal period of development during weeks 9 through 38. During the fetal period, the fetus grows larger and more complex until it is ready to be born.

Lactation is the production and release of milk to feed an infant. The production of milk begins prior to birth under the control of the hormone prolactin. Prolactin is produced in response to the suckling of an infant on the nipple, so milk is produced as long as active breastfeeding occurs. As soon as an infant is weaned, prolactin and milk production end soon after. The release of milk by the nipples is known as the “milk-letdown reflex” and is controlled by the hormone oxytocin. Oxytocin is also produced in response to infant suckling so that milk is only released when an infant is actively feeding.

If you’re planning to start a family, you may be interested in finding out if you’re a carrier of hereditary conditions that are recessive in you but could become dominant in your child. In the process, you can also find out if you’re possibly more at risk of breast and ovarian cancers as well as hereditary hemochromatosis (one of most common hereditary disorders, which can lower libido). Learn more about DNA health testing, which can help you explore these concerns so that you can discuss with your healthcare provider or genetic counselor.