Fertilization is the process of joining a spermatozoon and an ovum to form a zygote. Ova, also known as egg cells, are the haploid female gametes produced by the ovaries in the female reproductive system. At around the 14th day of the menstrual cycle, female sex hormones trigger the release of a mature ovum from one of the ovaries. The finger-like fimbriae of the Fallopian tubes sweep the surface of the ovaries to collect the ovum and place it into the hollow Fallopian tube. Once inside the Fallopian tube, the ovum is carried toward the uterus by many beating cilia in the lining of the tube and by peristaltic contractions of the tube. It is during this journey of the ovum toward the uterus that fertilization may occur. Continue Scrolling To Read More Below... 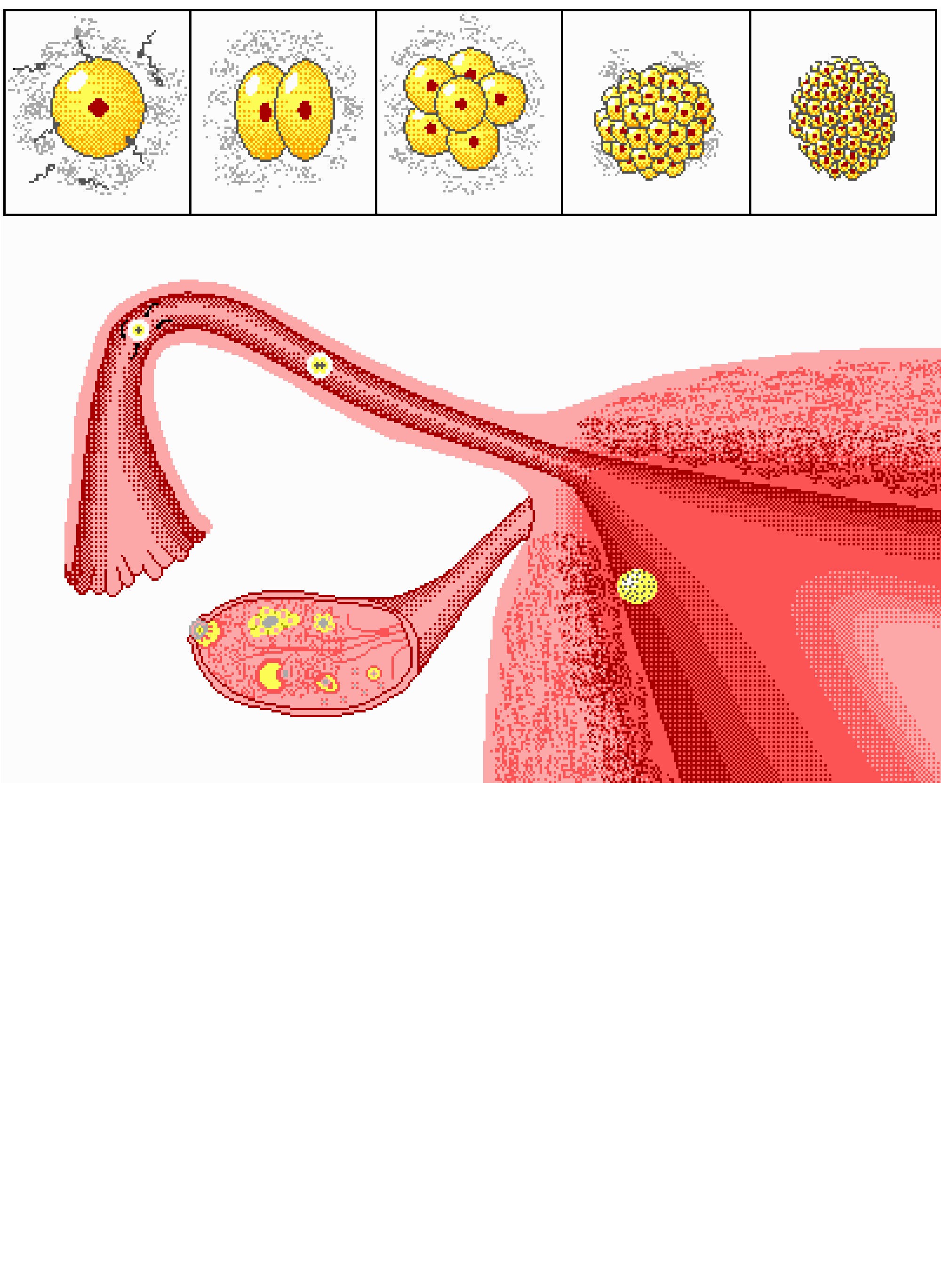 The testes of the male reproductive system produce millions of spermatozoa (or sperm cells) daily as the male gamete. Spermatozoa are flagellated haploid cells that carry half of the father’s genome to the mother’s reproductive system to fertilize ova. Sperm slowly develop and mature as they travel away from the testes through the long tubes of the epididymis and vas deferens and collect at the ejaculatory duct. Several exocrine glands in the male reproductive apparatus produce the liquid portion of semen that is mixed with sperm during ejaculation. During sexual intercourse, the penis enters the vagina of the female reproductive tract and semen is released into the vagina through ejaculation. The sperm next swim from the vagina through the cervix, uterus, and Fallopian tubes until they encounter the ovum. Semen provides protection to the sperm cells, yet the vast majority of sperm never make it to the Fallopian tubes. Only the healthiest sperm can reach the ovum and attempt to fertilize it.

Once sperm and egg meet in the Fallopian tube, the actual process of fertilization can begin. Sperm must pass through several layers in the exterior of the egg cell and often several sperm attempt to penetrate the egg cell at once, racing to be the first to enter the egg. The first sperm to enter the egg triggers a reaction that prevents all other sperm from passing through the plasma membrane of the egg cell, ensuring proper fertilization. Each haploid gamete — spermatozoon and ovum — contains half of the genetic material necessary to produce a baby. The sperm delivers its DNA to the ovum as soon as it penetrates the plasma membrane. Once the genetic material is combined the fertilized egg contains a full complement of DNA to produce a new, genetically unique baby. The fertilized egg is now known as a zygote and the process of pregnancy begins.

Pregnancy is the process of growth and development of a zygote into a fetus within the mother’s body. The zygote begins its development in the Fallopian tube immediately after fertilization, dividing from a single cell to a 32-cell blastocyst in its first week. During this first week the zygote slowly moves toward the uterus and embeds itself into the uterine wall just after reaching the blastocyst stage. The blastocyst continues developing into an embryo and forms tissues that become the umbilical cord and placenta.

During the embryonic stage, which last around 10 weeks, the tiny embryo’s cells differentiate and begin to form all of its major organ systems. External structures, such as eyes, ears, and fingers, begin to develop and are visible. Internal structures, such as the early brain and heart, also form at this time. Despite all of the complex structures that form, the embryo remains less than about an inch (2.5 cm) long throughout most of the embryonic stage.