The vulva is the collective name for the external female genitalia in the pubic region, including the labia, clitoris, and urethral and vaginal openings. These organs work together to support urination and sexual reproduction.

The exterior of the vulva begins as a mound of skin-covered adipose known as the mons pubis that arises from the skin covering the pubis bone in the pubic region. As it continues inferiorly, the mons pubis divides laterally into the two parallel labia majora. The labia majora are wide folds of skin and adipose that rise beyond the mons pubis and surround the pudendal cleft, a deep vertical furrow in the center of the vulva. Continue Scrolling To Read More Below... 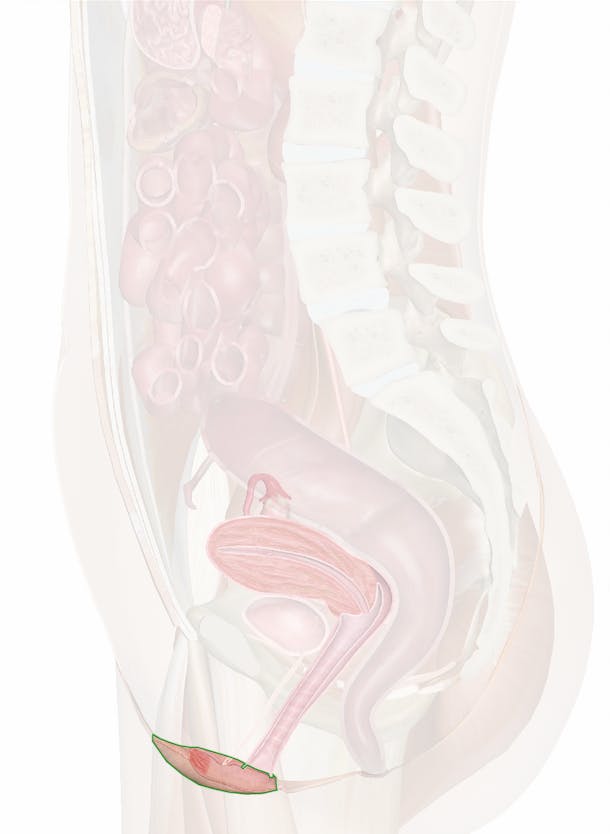 Continued From Above... Both the mons pubis and labia majora are covered in pubic hair following puberty and serve to protect the delicate structures of the vulva found in the pudendal cleft.

The clitoris is a small mass of highly sensitive erectile tissue that receives mechanical stimulation during sexual contact and transmits sensations of sexual pleasure to the brain. Thousands of touch and pressure sensitive nerve endings are packed into the clitoris, making it the most sensitive erogenous organ of the vulva. During sexual stimulation, erectile tissue in the clitoris fills with blood, causing it to enlarge, extend beyond the prepuce, and become more susceptible to stimulation. The clitoris also extends into the internal tissues of the vulva and is sensitive to mechanical stimulus inside of the vagina as well.

The external urethral orifice is a small hole in the vulva surrounded by a ring of slightly raised skin. It provides the connection for the urethra to the body’s exterior and permits the release of urine during the process of urination. Pathogenic bacteria present on the skin covering the vulva may enter the urethra through the external urethral orifice, resulting in urinary tract infections.

The vaginal orifice is the external connection between the vagina and the body’s exterior. It is much larger and more elastic than the external urethral orifice and allows for penetration during sexual intercourse as well as the passage of the fetus during childbirth.