The cardiovascular system consists of the heart, blood vessels, and the approximately 5 liters of blood that the blood vessels transport. Responsible for transporting oxygen, nutrients, hormones, and cellular waste products throughout the body, the cardiovascular system is powered by the body’s hardest-working organ — the heart, which is only about the size of a closed fist. Even at rest, the average heart easily pumps over 5 liters of blood throughout the body every minute. Continue Scrolling To Read More Below... 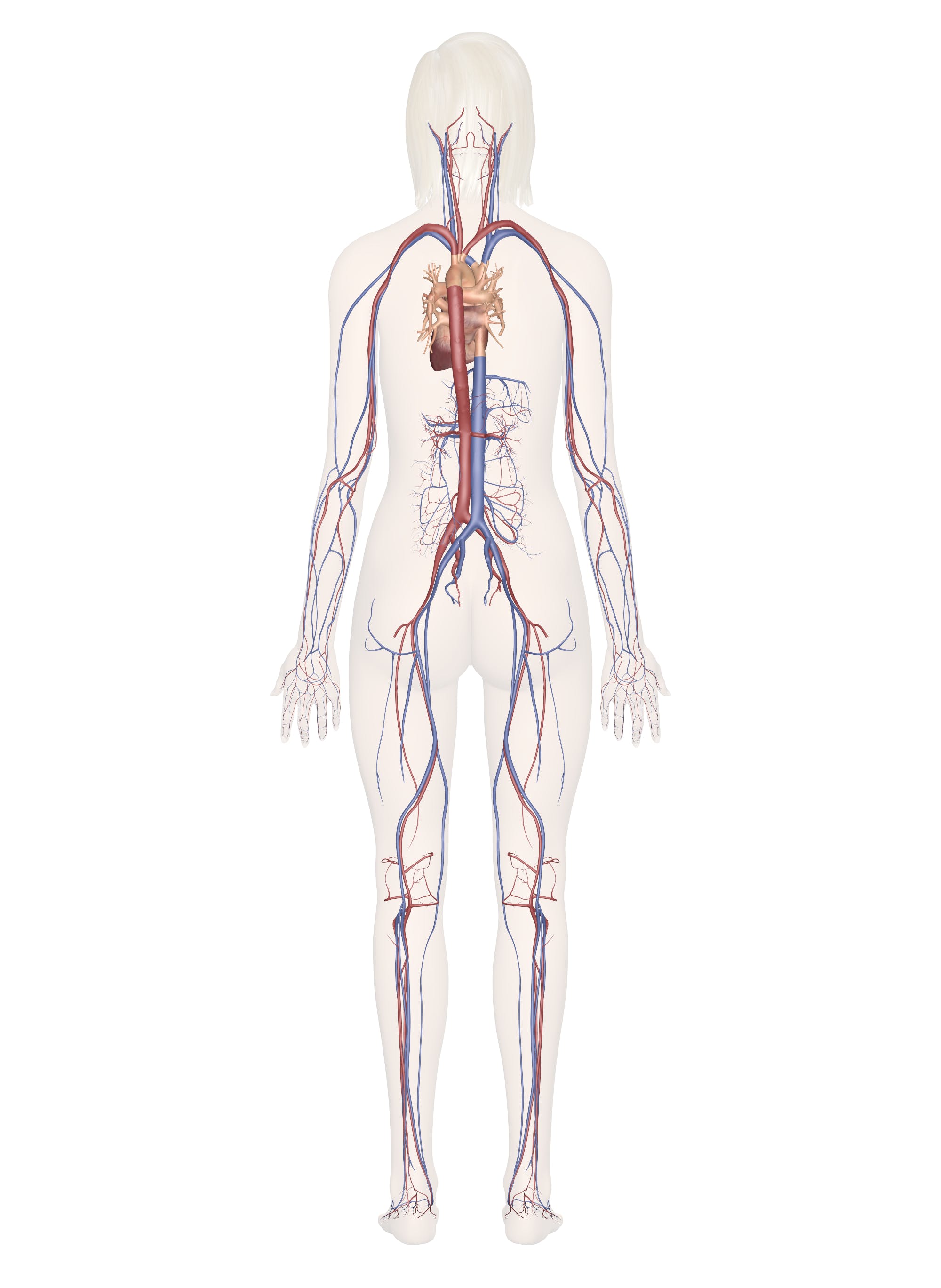 Blood vessels are the body’s highways that allow blood to flow quickly and efficiently from the heart to every region of the body and back again. The size of blood vessels corresponds with the amount of blood that passes through the vessel. All blood vessels contain a hollow area called the lumen through which blood is able to flow. Around the lumen is the wall of the vessel, which may be thin in the case of capillaries or very thick in the case of arteries.

All blood vessels are lined with a thin layer of simple squamous epithelium known as the endothelium that keeps blood cells inside of the blood vessels and prevents clots from forming. The endothelium lines the entire circulatory system, all the way to the interior of the heart, where it is called the endocardium.

There are three major types of blood vessels: arteries, capillaries and veins. Blood vessels are often named after either the region of the body through which they carry blood or for nearby structures. For example, the brachiocephalic artery carries blood into the brachial (arm) and cephalic (head) regions. One of its branches, the subclavian artery, runs under the clavicle; hence the name subclavian. The subclavian artery runs into the axillary region where it becomes known as the axillary artery.

Arteries are blood vessels that carry blood away from the heart. Blood carried by arteries is usually highly oxygenated, having just left the lungs on its way to the body’s tissues. The pulmonary trunk and arteries of the pulmonary circulation loop provide an exception to this rule — these arteries carry deoxygenated blood from the heart to the lungs to be oxygenated.

Arteries face high levels of blood pressure as they carry blood being pushed from the heart under great force. To withstand this pressure, the walls of the arteries are thicker, more elastic, and more muscular than those of other vessels. The largest arteries of the body contain a high percentage of elastic tissue that allows them to stretch and accommodate the pressure of the heart.

Smaller arteries are more muscular in the structure of their walls. The smooth muscles of the arterial walls of these smaller arteries contract or expand to regulate the flow of blood through their lumen. In this way, the body controls how much blood flows to different parts of the body under varying circumstances. The regulation of blood flow also affects blood pressure, as smaller arteries give blood less area to flow through and therefore increases the pressure of the blood on arterial walls.

Arterioles are narrower arteries that branch off from the ends of arteries and carry blood to capillaries. They face much lower blood pressures than arteries due to their greater number, decreased blood volume, and distance from the direct pressure of the heart. Thus arteriole walls are much thinner than those of arteries. Arterioles, like arteries, are able to use smooth muscle to control their aperture and regulate blood flow and blood pressure.

Capillaries are the smallest and thinnest of the blood vessels in the body and also the most common. They can be found running throughout almost every tissue of the body and border the edges of the body’s avascular tissues. Capillaries connect to arterioles on one end and venules on the other.

Capillaries carry blood very close to the cells of the tissues of the body in order to exchange gases, nutrients, and waste products. The walls of capillaries consist of only a thin layer of endothelium so that there is the minimum amount of structure possible between the blood and the tissues. The endothelium acts as a filter to keep blood cells inside of the vessels while allowing liquids, dissolved gases, and other chemicals to diffuse along their concentration gradients into or out of tissues.

Veins are the large return vessels of the body and act as the blood return counterparts of arteries. Because the arteries, arterioles, and capillaries absorb most of the force of the heart’s contractions, veins and venules are subjected to very low blood pressures. This lack of pressure allows the walls of veins to be much thinner, less elastic, and less muscular than the walls of arteries.

Veins rely on gravity, inertia, and the force of skeletal muscle contractions to help push blood back to the heart. To facilitate the movement of blood, some veins contain many one-way valves that prevent blood from flowing away from the heart. As skeletal muscles in the body contract, they squeeze nearby veins and push blood through valves closer to the heart.

When the muscle relaxes, the valve traps the blood until another contraction pushes the blood closer to the heart. Venules are similar to arterioles as they are small vessels that connect capillaries, but unlike arterioles, venules connect to veins instead of arteries. Venules pick up blood from many capillaries and deposit it into larger veins for transport back to the heart.

The heart has its own set of blood vessels that provide the myocardium with the oxygen and nutrients necessary to pump blood throughout the body. The left and right coronary arteries branch off from the aorta and provide blood to the left and right sides of the heart. The coronary sinus is a vein on the posterior side of the heart that returns deoxygenated blood from the myocardium to the vena cava.

The veins of the stomach and intestines perform a unique function: instead of carrying blood directly back to the heart, they carry blood to the liver through the hepatic portal vein. Blood leaving the digestive organs is rich in nutrients and other chemicals absorbed from food. The liver removes toxins, stores sugars, and processes the products of digestion before they reach the other body tissues. Blood from the liver then returns to the heart through the inferior vena cava.

The average human body contains about 4 to 5 liters of blood. As a liquid connective tissue, it transports many substances through the body and helps to maintain homeostasis of nutrients, wastes, and gases. Blood is made up of red blood cells, white blood cells, platelets, and liquid plasma.

Red blood cells, also known as erythrocytes, are by far the most common type of blood cell and make up about 45% of blood volume. Erythrocytes are produced inside of red bone marrow from stem cells at the astonishing rate of about 2 million cells every second. The shape of erythrocytes is biconcave—disks with a concave curve on both sides of the disk so that the center of an erythrocyte is its thinnest part. The unique shape of erythrocytes gives these cells a high surface area to volume ratio and allows them to fold to fit into thin capillaries. Immature erythrocytes have a nucleus that is ejected from the cell when it reaches maturity to provide it with its unique shape and flexibility. The lack of a nucleus means that red blood cells contain no DNA and are not able to repair themselves once damaged.

Erythrocytes transport oxygen in the blood through the red pigment hemoglobin. Hemoglobin contains iron and proteins joined to greatly increase the oxygen carrying capacity of erythrocytes. The high surface area to volume ratio of erythrocytes allows oxygen to be easily transferred into the cell in the lungs and out of the cell in the capillaries of the systemic tissues.

Also known as thrombocytes, platelets are small cell fragments responsible for the clotting of blood and the formation of scabs. Platelets form in the red bone marrow from large megakaryocyte cells that periodically rupture and release thousands of pieces of membrane that become the platelets. Platelets do not contain a nucleus and only survive in the body for up to a week before macrophages capture and digest them.

Plasma is the non-cellular or liquid portion of the blood that makes up about 55% of the blood’s volume. Plasma is a mixture of water, proteins, and dissolved substances. Around 90% of plasma is made of water, although the exact percentage varies depending upon the hydration levels of the individual. The proteins within plasma include antibodies and albumins. Antibodies are part of the immune system and bind to antigens on the surface of pathogens that infect the body. Albumins help maintain the body’s osmotic balance by providing an isotonic solution for the cells of the body. Many different substances can be found dissolved in the plasma, including glucose, oxygen, carbon dioxide, electrolytes, nutrients, and cellular waste products. The plasma functions as a transportation medium for these substances as they move throughout the body.

Functions of the Cardiovascular System

The cardiovascular system has three major functions: transportation of materials, protection from pathogens, and regulation of the body’s homeostasis.

Many serious conditions and diseases can cause our cardiovascular system to stop working properly. Quite often, we don’t do enough about them proactively, resulting in emergencies. Browse our content to learn more about cardiovascular health. Also, explore how DNA health testing can allow you to begin important conversations with your doctor about genetic risks for disorders involving clotting, hemophilia, hemochromatosis (a common hereditary disorder causing iron to accumulate in the heart) and glucose-6-phosphate dehydrogenase (which affects about 1 in 10 African American men).

Several functions of the cardiovascular system can control blood pressure. Certain hormones along with autonomic nerve signals from the brain affect the rate and strength of heart contractions. Greater contractile force and heart rate lead to an increase in blood pressure. Blood vessels can also affect blood pressure. Vasoconstriction decreases the diameter of an artery by contracting the smooth muscle in the arterial wall. The sympathetic (fight or flight) division of the autonomic nervous system causes vasoconstriction, which leads to increases in blood pressure and decreases in blood flow in the constricted region. Vasodilation is the expansion of an artery as the smooth muscle in the arterial wall relaxes after the fight-or-flight response wears off or under the effect of certain hormones or chemicals in the blood. The volume of blood in the body also affects blood pressure. A higher volume of blood in the body raises blood pressure by increasing the amount of blood pumped by each heartbeat. Thicker, more viscous blood from clotting disorders can also raise blood pressure.

Hemostasis, or the clotting of blood and formation of scabs, is managed by the platelets of the blood. Platelets normally remain inactive in the blood until they reach damaged tissue or leak out of the blood vessels through a wound. Once active, platelets change into a spiny ball shape and become very sticky in order to latch on to damaged tissues. Platelets next release chemical clotting factors and begin to produce the protein fibrin to act as structure for the blood clot. Platelets also begin sticking together to form a platelet plug. The platelet plug will serve as a temporary seal to keep blood in the vessel and foreign material out of the vessel until the cells of the blood vessel can repair the damage to the vessel wall.