The skin is by far the largest organ of the human body, weighing about 10 pounds (4.5 kg) and measuring about 20 square feet (2 square meters) in surface area. It forms the outer covering for the entire body and protects the internal tissues from the external environment.

The skin consists of two distinct layers: the epidermis and the dermis. Each layer is made of distinct tissues and performs distinct functions to support the body. A third layer of tissue under the skin, known as the hypodermis or subcutaneous layer, is not truly part of the skin itself but connects the skin loosely to the underlying muscles and bones that make up the deeper tissues of the body. Continue Scrolling To Read More Below... 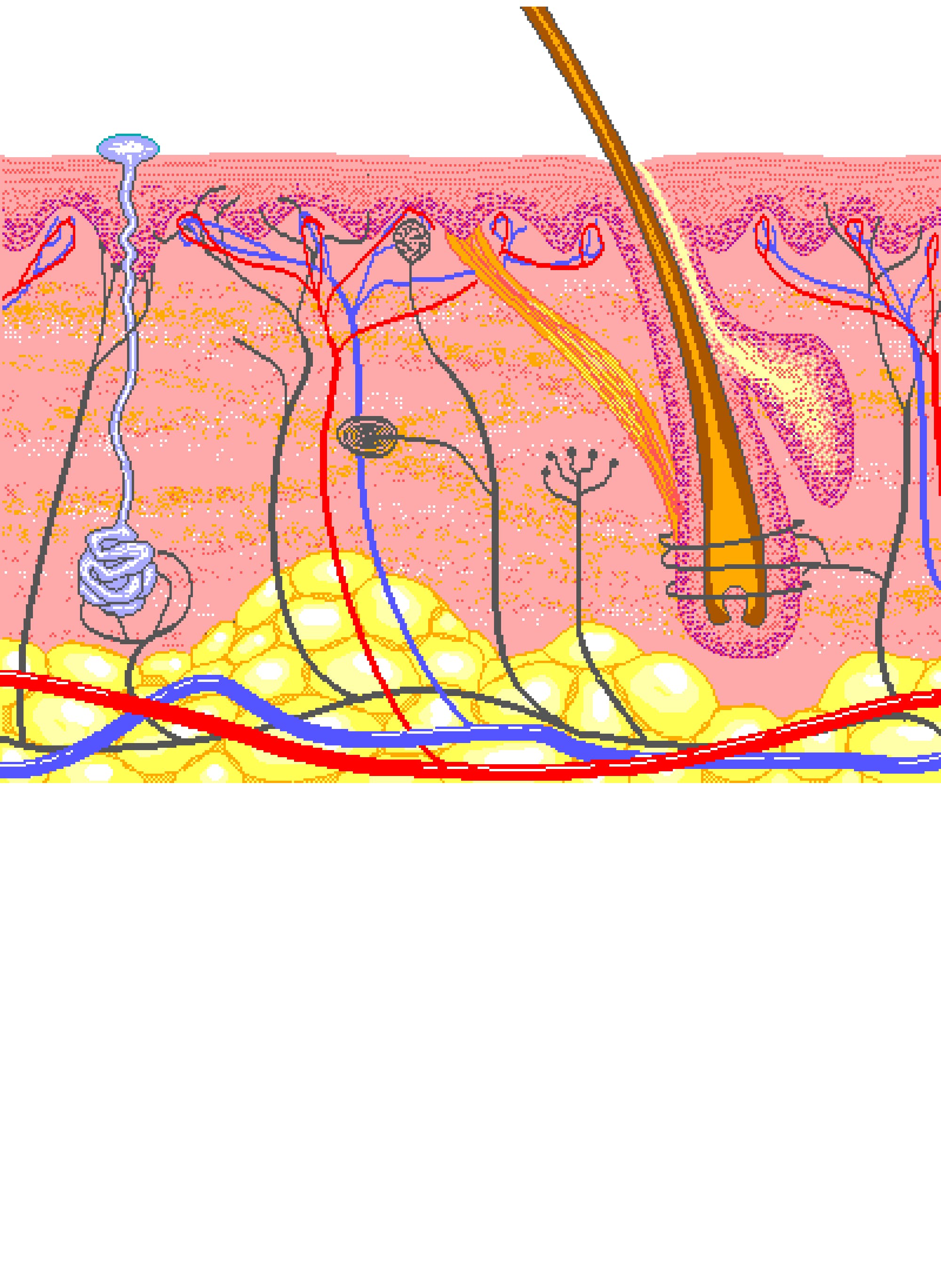 The epidermis is made of four to five layers of epithelial tissue that constantly grows from the inside out and replaces most of its cells every few weeks.

Deep to the epidermis are the connective tissues of the dermis. Two major regions make up the dermis: the papillary layer (stratum papillarosum) and the reticular layer (stratum reticulosum).

Deep to the dermis is the subcutaneous layer, also known as the hypodermis. The subcutaneous layer contains mostly loose connective tissues such as adipose and areolar connective tissue. These tissues store energy as triglycerides; provide insulation to the underlying tissues; and loosely connect the skin to the body. This loose connection increases the flexibility of the body, especially at the joints where a large range of motion is extremely important.

Being the largest and most superficial organ of the body, the skin provides many important functions to the body. The skin acts as the primary barrier to keep materials from passing into and out of the body. This barrier function prevents pathogens and toxins from entering the body and keeps vital fluids locked in the body’s tissues. The skin also protects the underlying tissues from UV radiation, extreme temperatures, and friction. Its high capacity for replacing itself results in the skin being able to sustain significant environmental damage and then quickly heal to resume its function. A dense network of nerves provides the skin with the ability to sense touch, pain, temperature and pressure from the external environment. Even the blood vessels in the dermis function in the regulation of body temperature by controlling how much hot blood passes near the body’s surface or is kept in deeper tissues.

The skin also contains many accessory structures that assist enhance its functions. Hairs growing out of the skin help to shade and insulate parts of the body to protect them from the environment. Nails reinforce the fingertips and can be used for scratching. A variety of exocrine glands also add function to the skin through their secretions. Sudoriferous (sweat) glands help maintain the body’s temperature homeostasis through evaporative cooling. Sebaceous glands help to lubricate and hydrate the skin while making it more waterproof. Finally, ceruminous glands produce earwax to protect the ear canals from pathogens and environmental pollutants.