The male reproductive system includes the scrotum, testes, spermatic ducts, sex glands, and penis. These organs work together to produce sperm, the male gamete, and the other components of semen. These reproductive organs also work together to deliver semen out of the body and into the vagina where it can fertilize egg cells to produce offspring. Continue Scrolling To Read More Below... 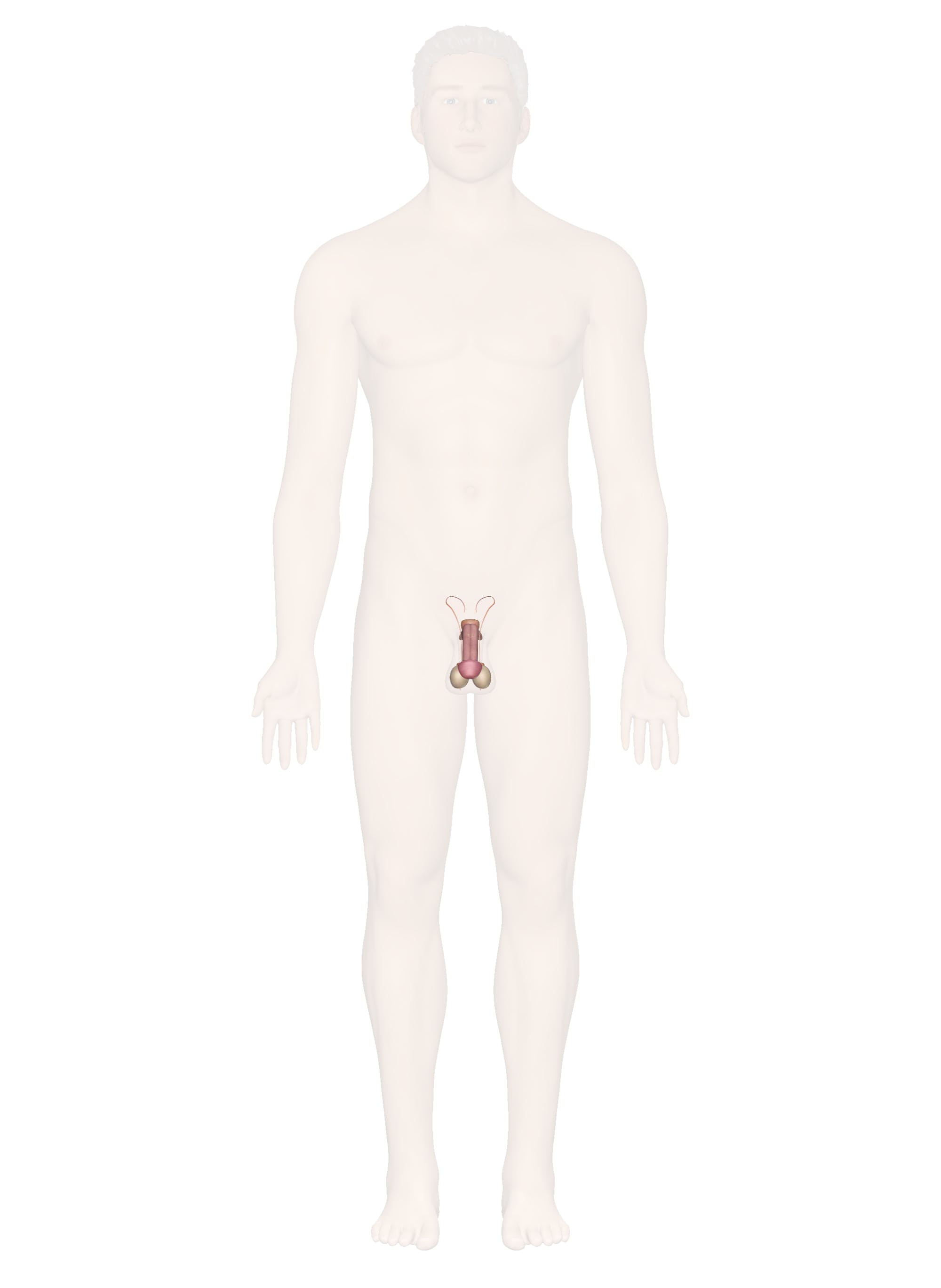 Anatomy of the Male Reproductive System

The 2 testes, also known as testicles, are the male gonads responsible for the production of sperm and testosterone. The testes are ellipsoid glandular organs around 1.5 to 2 inches long and an inch in diameter. Each testis is found inside its own pouch on one side of the scrotum and is connected to the abdomen by a spermatic cord and cremaster muscle. The cremaster muscles contract and relax along with the scrotum to regulate the temperature of the testes. The inside of the testes is divided into small compartments known as lobules. Each lobule contains a section of seminiferous tubule lined with epithelial cells. These epithelial cells contain many stem cells that divide and form sperm cells through the process of spermatogenesis.

The epididymis is a sperm storage area that wraps around the superior and posterior edge of the testes. The epididymis is made up of several feet of long, thin tubules that are tightly coiled into a small mass. Sperm produced in the testes moves into the epididymis to mature before being passed on through the male reproductive organs. The length of the epididymis delays the release of the sperm and allows them time to mature.

The prostate is a walnut-sized exocrine gland that borders the inferior end of the urinary bladder and surrounds the urethra. The prostate produces a large portion of the fluid that makes up semen. This fluid is milky white in color and contains enzymes, proteins, and other chemicals to support and protect sperm during ejaculation. The prostate also contains smooth muscle tissue that can constrict to prevent the flow of urine or semen.

Unfortunately the prostate is also particularly susceptible to cancer. Thankfully, DNA health testing can tell you whether you’re at higher genetic risk of developing prostate cancer due to your BRCA1 and BRCA2 genes.

The penis is the male external sexual organ located superior to the scrotum and inferior to the umbilicus. The penis is roughly cylindrical in shape and contains the urethra and the external opening of the urethra. Large pockets of erectile tissue in the penis allow it to fill with blood and become erect. The erection of the penis causes it to increase in size and become turgid. The function of the penis is to deliver semen into the vagina during sexual intercourse. In addition to its reproductive function, the penis also allows for the excretion of urine through the urethra to the exterior of the body.

Erectile dysfunction is a common reproductive issue; in each decade of men’s lives, it affects about an equivalent percentage of peers. For instance, roughly 20% of men in their 20s experience a degree of erectile dysfunction. The rate rises to 30% of men experiencing ED symptoms in their 30s, and 50% of men in their 50s (and so on). Because it’s so common, the medical community has responded with increasingly convenient ways to treat ED. Read our Hims ED review for more information.

Semen is the fluid produced by males for sexual reproduction and is ejaculated out of the body during sexual intercourse. Semen contains sperm, the male reproductive gametes, along with a number of chemicals suspended in a liquid medium. The chemical composition of semen gives it a thick, sticky consistency and a slightly alkaline pH. These traits help semen to support reproduction by helping sperm to remain within the vagina after intercourse and to neutralize the acidic environment of the vagina. In healthy adult males, semen contains around 100 million sperm cells per milliliter. These sperm cells fertilize oocytes inside the female fallopian tubes.

Physiology of the Male Reproductive System

Spermatogenesis is the process of producing sperm and takes place in the testes and epididymis of adult males. Prior to puberty, there is no spermatogenesis due to the lack of hormonal triggers. At puberty, spermatogenesis begins when luteinizing hormone (LH) and follicle stimulating hormone (FSH) are produced. LH triggers the production of testosterone by the testes while FSH triggers the maturation of germ cells. Testosterone stimulates stem cells in the testes known as spermatogonium to undergo the process of developing into spermatocytes. Each diploid spermatocyte goes through the process of meiosis I and splits into 2 haploid secondary spermatocytes. The secondary spermatocytes go through meiosis II to form 4 haploid spermatid cells. The spermatid cells then go through a process known as spermiogenesis where they grow a flagellum and develop the structures of the sperm head. After spermiogenesis, the cell is finally a sperm cell, or spermatozoa. The spermatozoa are released into the epididymis where they complete their maturation and become able to move on their own.

Fertilization is the process by which a sperm combines with an oocyte, or egg cell, to produce a fertilized zygote. The sperm released during ejaculation must first swim through the vagina and uterus and into the fallopian tubes where they may find an oocyte. After encountering the oocyte, sperm next have to penetrate the outer corona radiata and zona pellucida layers of the oocyte. Sperm contain enzymes in the acrosome region of the head that allow them to penetrate these layers. After penetrating the interior of the oocyte, the nuclei of these haploid cells fuse to form a diploid cell known as a zygote. The zygote cell begins cell division to form an embryo.