The ductus deferens, also known as the vas deferens, is a tiny muscular tube in the male reproductive system that carries sperm from the epididymis to the ejaculatory duct. There is a pair of these ducts in the male body, with one duct carrying sperm from each testis to the left and right ejaculatory ducts. Along the way they pass through the scrotum, spermatic cord, inguinal canal, and pelvic body cavity. The location and function of the ductus deferens makes it a prime area for male contraception surgery. Continue Scrolling To Read More Below... 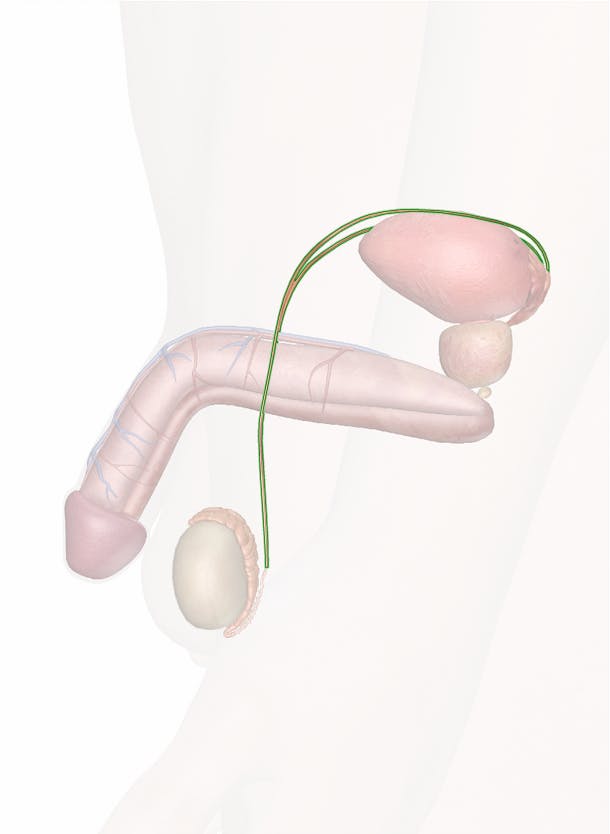 The ductus deferens is a thin tubule less than a quarter of an inch (5 mm) in diameter, but more than one foot (30 cm) long. It begins as a continuation of the tail of the epididymis in the posterior region of the scrotum. Compared to the epididymis, the ductus deferens is much wider and less convoluted, with most of its folds at the transition between the two structures. From the epididymis, the ductus deferens ascends posterior to the testes and enters the spermatic cord that connects the testes to the rest of the body. It continues with the spermatic cord, exiting the scrotum and entering the pelvic body cavity at the inguinal canal. Inside the pelvic cavity, the ductus deferens passes anterior to the pelvic bone before turning about 90 degrees toward the posterior and passing over the pelvic brim toward the urinary bladder. It continues around the side of the bladder and passes superior to the ureters before turning 90 degrees toward the inferior direction and descending along the posterior end of the bladder to the prostate gland. Between the ureters and the prostate, the ductus deferens expands its diameter considerably in a region known as the ampulla before narrowing and joining with the seminal vesicles at the ejaculatory duct inside the prostate.

The tissue structure of the ductus deferens includes an inner lining of epithelial tissue; a middle layer of connective tissue and visceral muscle; and an outer layer of adventitia.

Sperm passing through the ductus deferens is not yet motile, or able to swim, and thus must be transported via peristalsis. Smooth muscle tissue in the walls of the ductus deferens contracts in waves of peristalsis to slowly move sperm along its length. After sperm has reached the far end of the ductus deferens, it can be stored in the widened ampulla for several months as it awaits ejaculation. Older and damaged sperm that are non-viable are absorbed by the epithelial lining of the ampulla and broken down by the body and their parts reused in other cells.