Found only in men, the prostate is a walnut-sized gland that grows throughout a man’s life and may eventually interfere with or prevent urination by blocking the urethra. The prostate makes a significant contribution to the production and ejaculation of semen during sexual intercourse. Prostate cancer is a common disorder of the prostate that often necessitates the surgical removal of the prostate. Continue Scrolling To Read More Below... 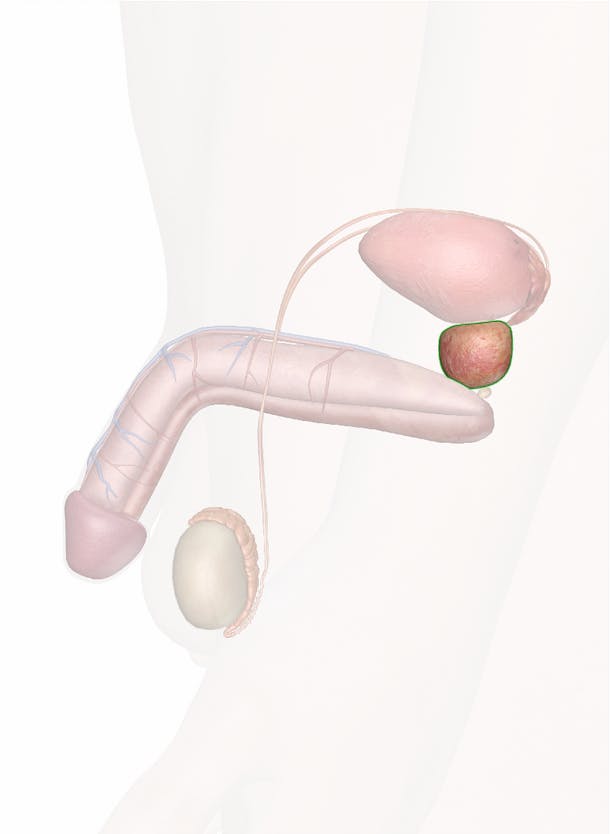 Evidence suggests that some men are at genetically higher risk of developing prostate cancer than others. Learn more about DNA health testing to decide if you’d like to find out your own genetic risk.

Anatomy of the Prostate

The prostate is a small muscular gland located inferior to the urinary bladder in the pelvic body cavity. It is shaped like a rounded cone or a funnel with its base pointed superiorly toward the urinary bladder. The prostate surrounds the urethra as it exits the bladder and merges with the ductus deferens at the ejaculatory duct.

Several distinct lobes make up the structure of the prostate:

Physiology of the Prostate

The prostate produces a secretion that makes up a large portion of semen volume. The prostatic secretions are a milky white mixture of simple sugars (such as fructose and glucose), enzymes, and alkaline chemicals. The sugars secreted by the prostate function as nutrition for sperm as they pass into the female body to fertilize ova. Enzymes work to break down proteins in semen after ejaculation to free sperm cells from the viscous semen. The alkaline chemicals in prostatic secretions neutralize acidic vaginal secretions to promote the survival of sperm in the female body.

Urine released from the urinary bladder is carried by the urethra to the body’s exterior. Under normal conditions, urine in the urethra passes through the prostate with no complications whatsoever. The prostate enlarges slowly throughout a man’s lifetime, potentially leading to the restriction or blockage of the urethra by the time a man reaches his fifties or sixties. An enlarged prostate can lead to difficulty urinating or eventually even an inability to urinate. There are many treatments for an enlarged prostate including medications, lifestyle changes, and prostatectomy, the surgical removal of the prostate.