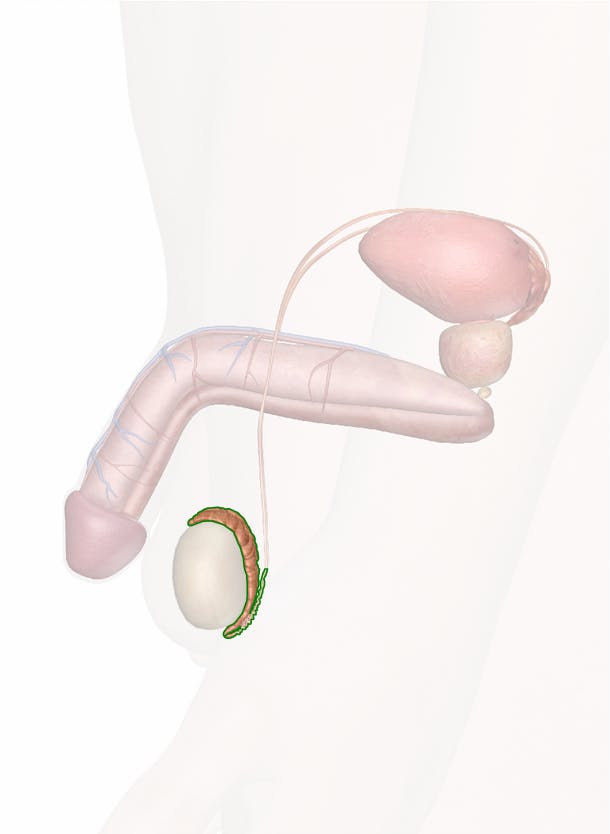 Continued From Above... Starting at the efferent tubules of the testis, the tubule of the epididymis winds over the top of the testis and then down the posterior side. Then, near the bottom of the testis, it turns 180 degrees and continues superiorly before joining the ductus deferens.

The epididymis can be divided into three major regions: the head, body, and tail. The head is the widest and most superior region, which receives sperm from the efferent ducts of the testis. Inferior to the head is the body, which is slightly narrower in diameter than the head and descends along the posterior edge of the testis. Finally, the tail is the narrow inferior portion of the epididymis; it joins with the ductus deferens.

When sperm first enters the epididymis from the testis, it is very immature and diluted by a relatively large volume of liquid. The smooth muscle of the epididymis pushes the sperm along tubule with slow waves of peristalsis, so that the sperm traverse its entire 20-foot length in about two weeks. During this time the sperm is supplied with nutrients secreted from the lining of the epididymis and incubated while it matures. All defective and dead sperm, along with most of the liquid medium, are slowly absorbed by the body to concentrate the sperm, which can be stored in the epididymis for up to a month. After a month in the epididymis, sperm begin to expire and are absorbed by stereocilia and replaced by younger sperm. As sperm is needed for ejaculation, it moves from the epididymis to the ductus deferens and onward into the male reproductive tract.