The cells of the human body require a constant stream of oxygen to stay alive. The respiratory system provides oxygen to the body’s cells while removing carbon dioxide, a waste product that can be lethal if allowed to accumulate. There are 3 major parts of the respiratory system: the airway, the lungs, and the muscles of respiration. The airway, which includes the nose, mouth, pharynx, larynx, trachea, bronchi, and bronchioles, carries air between the lungs and the body’s exterior. The lungs Continue Scrolling To Read More Below... 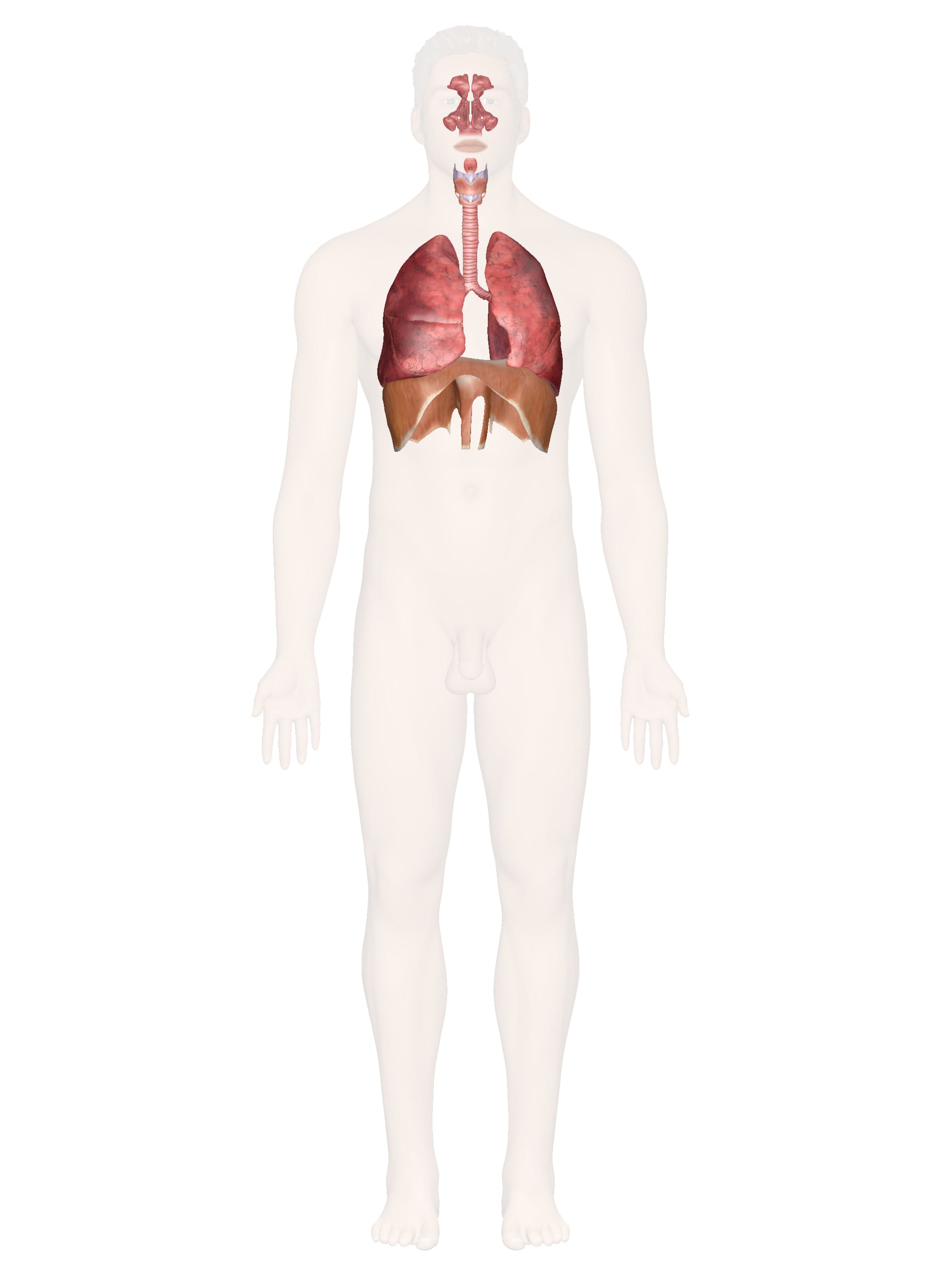 Continued From Above... act as the functional units of the respiratory system by passing oxygen into the body and carbon dioxide out of the body. Finally, the muscles of respiration, including the diaphragm and intercostal muscles, work together to act as a pump, pushing air into and out of the lungs during breathing.

Anatomy of the Respiratory System

The mouth, also known as the oral cavity, is the secondary external opening for the respiratory tract. Most normal breathing takes place through the nasal cavity, but the oral cavity can be used to supplement or replace the nasal cavity’s functions when needed. Because the pathway of air entering the body from the mouth is shorter than the pathway for air entering from the nose, the mouth does not warm and moisturize the air entering the lungs as well as the nose performs this function. The mouth also lacks the hairs and sticky mucus that filter air passing through the nasal cavity. The one advantage of breathing through the mouth is that its shorter distance and larger diameter allows more air to quickly enter the body.

The pharynx, also known as the throat, is a muscular funnel that extends from the posterior end of the nasal cavity to the superior end of the esophagus and larynx. The pharynx is divided into 3 regions: the nasopharynx, oropharynx, and laryngopharynx. The nasopharynx is the superior region of the pharynx found in the posterior of the nasal cavity. Inhaled air from the nasal cavity passes into the nasopharynx and descends through the oropharynx, located in the posterior of the oral cavity. Air inhaled through the oral cavity enters the pharynx at the oropharynx. The inhaled air then descends into the laryngopharynx, where it is diverted into the opening of the larynx by the epiglottis. The epiglottis is a flap of elastic cartilage that acts as a switch between the trachea and the esophagus. Because the pharynx is also used to swallow food, the epiglottis ensures that air passes into the trachea by covering the opening to the esophagus. During the process of swallowing, the epiglottis moves to cover the trachea to ensure that food enters the esophagus and to prevent choking.

The larynx, also known as the voice box, is a short section of the airway that connects the laryngopharynx and the trachea. The larynx is located in the anterior portion of the neck, just inferior to the hyoid bone and superior to the trachea. Several cartilage structures make up the larynx and give it its structure. The epiglottis is one of the cartilage pieces of the larynx and serves as the cover of the larynx during swallowing. Inferior to the epiglottis is the thyroid cartilage, which is often referred to as the Adam’s apple as it is most commonly enlarged and visible in adult males. The thyroid holds open the anterior end of the larynx and protects the vocal folds. Inferior to the thyroid cartilage is the ring-shaped cricoid cartilage which holds the larynx open and supports its posterior end. In addition to cartilage, the larynx contains special structures known as vocal folds, which allow the body to produce the sounds of speech and singing. The vocal folds are folds of mucous membrane that vibrate to produce vocal sounds. The tension and vibration speed of the vocal folds can be changed to change the pitch that they produce.

The trachea, or windpipe, is a 5-inch long tube made of C-shaped hyaline cartilage rings lined with pseudostratified ciliated columnar epithelium. The trachea connects the larynx to the bronchi and allows air to pass through the neck and into the thorax. The rings of cartilage making up the trachea allow it to remain open to air at all times. The open end of the cartilage rings faces posteriorly toward the esophagus, allowing the esophagus to expand into the space occupied by the trachea to accommodate masses of food moving through the esophagus.

The main function of the trachea is to provide a clear airway for air to enter and exit the lungs. In addition, the epithelium lining the trachea produces mucus that traps dust and other contaminants and prevents it from reaching the lungs. Cilia on the surface of the epithelial cells move the mucus superiorly toward the pharynx where it can be swallowed and digested in the gastrointestinal tract.

As the airway splits into the tree-like branches of the bronchi and bronchioles, the structure of the walls of the airway begins to change. The primary bronchi contain many C-shaped cartilage rings that firmly hold the airway open and give the bronchi a cross-sectional shape like a flattened circle or a letter D. As the bronchi branch into secondary and tertiary bronchi, the cartilage becomes more widely spaced and more smooth muscle and elastin protein is found in the walls. The bronchioles differ from the structure of the bronchi in that they do not contain any cartilage at all. The presence of smooth muscles and elastin allow the smaller bronchi and bronchioles to be more flexible and contractile.

The lungs are a pair of large, spongy organs found in the thorax lateral to the heart and superior to the diaphragm. Each lung is surrounded by a pleural membrane that provides the lung with space to expand as well as a negative pressure space relative to the body’s exterior. The negative pressure allows the lungs to passively fill with air as they relax. The left and right lungs are slightly different in size and shape due to the heart pointing to the left side of the body. The left lung is therefore slightly smaller than the right lung and is made up of 2 lobes while the right lung has 3 lobes.

The interior of the lungs is made up of spongy tissues containing many capillaries and around 30 million tiny sacs known as alveoli. The alveoli are cup-shaped structures found at the end of the terminal bronchioles and surrounded by capillaries. The alveoli are lined with thin simple squamous epithelium that allows air entering the alveoli to exchange its gases with the blood passing through the capillaries.

Surrounding the lungs are sets of muscles that are able to cause air to be inhaled or exhaled from the lungs. The principal muscle of respiration in the human body is the diaphragm, a thin sheet of skeletal muscle that forms the floor of the thorax. When the diaphragm contracts, it moves inferiorly a few inches into the abdominal cavity, expanding the space within the thoracic cavity and pulling air into the lungs. Relaxation of the diaphragm allows air to flow back out the lungs during exhalation.

Physiology of the Respiratory System

To exhale air, the diaphragm and external intercostal muscles relax while the internal intercostal muscles contract to reduce the volume of the thorax and increase the pressure within the thoracic cavity. The pressure gradient is now reversed, resulting in the exhalation of air until the pressures inside the lungs and outside of the body are equal. At this point, the elastic nature of the lungs causes them to recoil back to their resting volume, restoring the negative pressure gradient present during inhalation.

External respiration is the exchange of gases between the air filling the alveoli and the blood in the capillaries surrounding the walls of the alveoli. Air entering the lungs from the atmosphere has a higher partial pressure of oxygen and a lower partial pressure of carbon dioxide than does the blood in the capillaries. The difference in partial pressures causes the gases to diffuse passively along their pressure gradients from high to low pressure through the simple squamous epithelium lining of the alveoli. The net result of external respiration is the movement of oxygen from the air into the blood and the movement of carbon dioxide from the blood into the air. The oxygen can then be transported to the body’s tissues while carbon dioxide is released into the atmosphere during exhalation.

Under normal resting conditions, the body maintains a quiet breathing rate and depth called eupnea. Eupnea is maintained until the body’s demand for oxygen and production of carbon dioxide rises due to greater exertion. Autonomic chemoreceptors in the body monitor the partial pressures of oxygen and carbon dioxide in the blood and send signals to the respiratory center of the brain stem. The respiratory center then adjusts the rate and depth of breathing to return the blood to its normal levels of gas partial pressures.

When something impairs our ability to exchange carbon dioxide for oxygen, this is obviously a serious problem. Many health problems can cause respiratory problems, from allergies and asthma to pneumonia and lung cancer. The causes of these issues are just as varied—among them, infection (bacterial or viral), environmental exposure (pollution or cigarette smoke, for instance), genetic inheritance or a combination of factors. Sometimes the onset is so gradual, we don’t seek medical attention until the condition has advanced. Sometimes, as with the genetic disorder called alpha-1 antitrypsin deficiency (A1AD), symptoms gradually set in and are often under-diagnosed or misdiagnosed. DNA health testing can screen you for genetic risk of A1AD.