Which U.S. state is the kinkiest?

If you thought California or New York had the kinkiest population, think again. We used Google Trends to find the most sexually explorative states.

Alec McPikeIn addition to writing for Innerbody Research, Alec is also a Master Scuba Diver and U.S. Coast Guard veteran. Alec earned a B.A. in journalism with an outside concentration in psychology from Pepperdine University.

Key takeaways
Which kinks are we most curious about: an overview
Most searched for kinks by state
The least kinky states
The kinkiest state in the U.S.
Methodology
Fair use statement
Sources 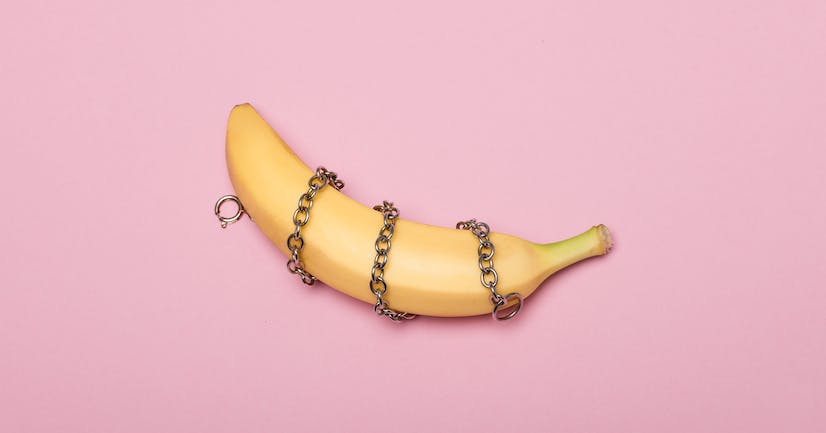 Since the sexual revolution of the 1960s, sexual exploration in the United States has been on the rise. Due to the increasing acceptance of sexuality and relationship styles, people are now more open to exploring their kinks and fetishes. As a result, many states have seen an increase in sex toy sales, adult entertainment, and sex education classes.

Sexual exploration is an essential part of establishing ownership of your body and feelings of increased comfort in your own skin. It can also help spice up a relationship by allowing couples to learn more about each other and what turns the other person on (or doesn’t). Couples willing to explore their sexuality together tend to have a stronger relationship overall.

Given the importance of sexual exploration and creativity, we wanted to better understand what couples are up to as they become increasingly adventurous in the bedroom. By analyzing Google Trends search data, we were able to learn how often specific keywords, subjects, or phrases were searched for over the last year in each state. And we discovered a range of differences, state to state, in terms of preferred kinks and the prevalence of interest in various kinks included in our analysis.

Which kinks are we most curious about: an overview 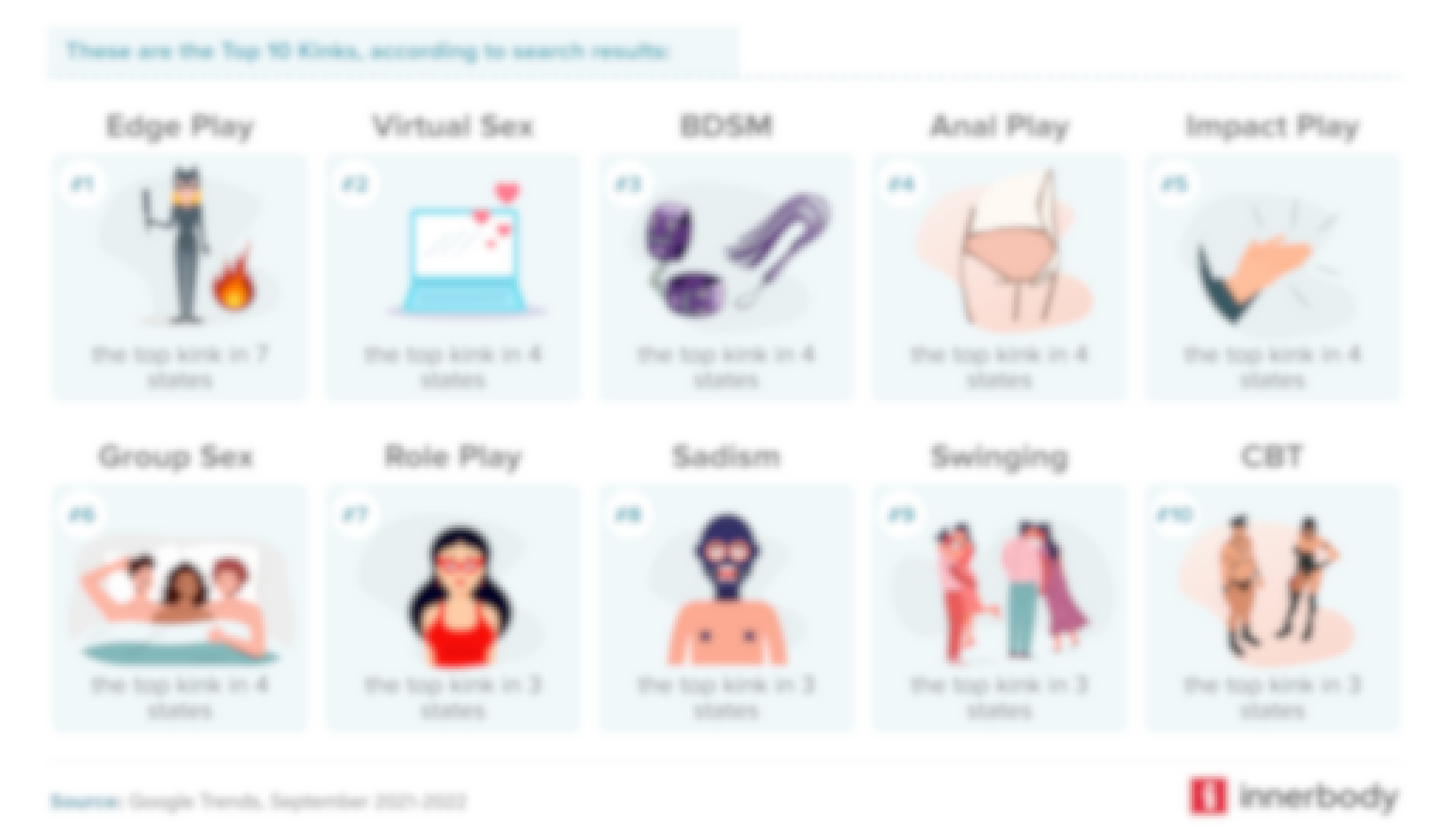 The U.S. states cover a wide range of opinions. Some states prefer more traditional values, while others are more modern; some states have a strong agricultural foundation, while others have focused more on manufacturing or technology. But whether it’s industry, food, music, or sports, there are always similarities between them. Even when people are reluctant to admit it, sex is one of those things every state enjoys.

What about the preferred sexual kinks of each state? How might the sexual interests of individuals and couples vary depending on where they live? To find out, we analyzed Google Trends search data across all 50 states to determine which kinks were the most interesting to people in each state.

According to our analysis, the sexual kink commanding the interest of the most states (seven) was edge play: a broad term used for any sexual activity that pushes the boundaries of what is typically considered safe.

The definition is open to interpretation; it may also include the literal utilization of sharp objects. However, communication between partners before engaging in edge play is essential, as it can be easy to cross another person’s boundaries unintentionally.

Most searched for kinks by state 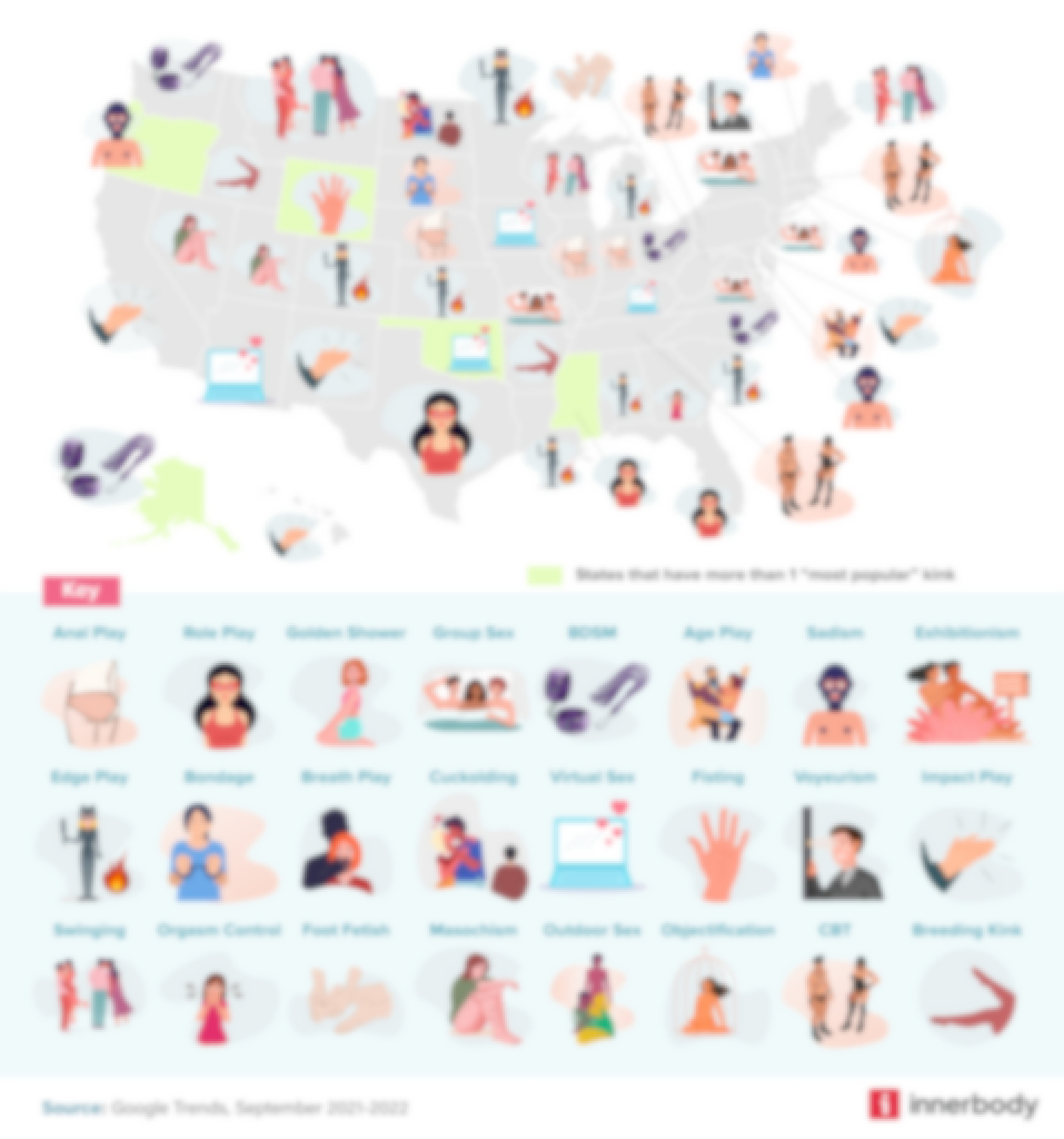 Not everyone is forthcoming about their sexual interests. Whether it stems from cultural biases, misplaced guilt, misinformation, or a lack of knowledge or experience, sexual repression can cause a number of problems for couples and individuals, including:

But the fact is, people are interested in and draw pleasure from a wide variety of kinks and fetishes. These interests also tend to vary based not only on gender and cultural conditioning but also on geography. So, to better understand what’s turning people on most in each state, we turned to Google Trends search data for more information.

A number of trends emerged when we compared the search data for each kink on a state-to-state level. States in the Midwest, for example, had similar preferences, as did some of the states along the East Coast. We also found states with specific preference clusters or an equally shared interest in more than one kink. But even after our final analysis, we were still left with questions: why is outdoor sex so attractive to people in Oregon but not to Washingtonians or Alaskans? Were factors such as population density the reason people in more rural states — including Iowa, Kentucky, and Arizona — showed more interest in virtual sex? In the end, some geographical patterns were crystal clear, while others were not.

For clarification, the numbers we mention (0-100) represent the search interest relative to the highest point on the chart. A value of 100 means it’s the most popular, and almost no one searches for terms with a value of 0.

Covering a large swath of the Midwest and parts of the East Coast, we found two primary sexual kinks that were of the greatest interest to people:

Sadism trended highest in Connecticut (88) and the District of Columbia (99), whereas cock and ball torture was of great fascination to people in the nearby eastern states of Massachusetts (94), Pennsylvania (100), and Tennessee (88).

In Arizona (85), as well as the Midwest states of Iowa (86) and Kentucky (90), it was virtual sex that most interested people. The geographically unrelated states of Hawaii (100), California (83), New Mexico (87), and Delaware (99) were all primarily concerned with impact play.

In some southern states, primarily Florida (81) and Texas (83), people were most interested in roleplay, whereas South Dakota (94) and New Hampshire (89) were the states searching most for information about bondage. The kink of peak curiosity in Utah (90) and Nevada (100) was masochism, too.

Some states were alone in their top searches. 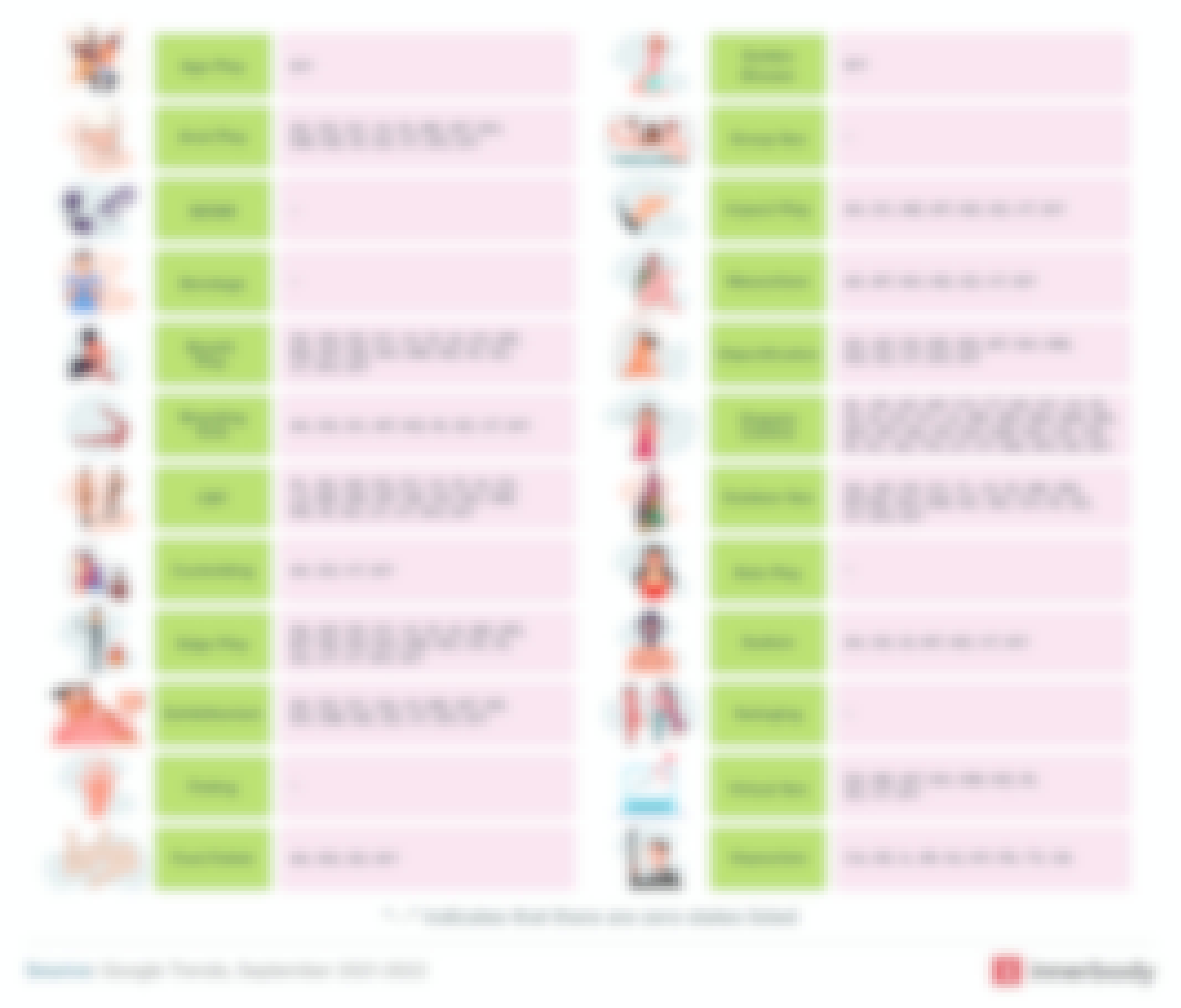 Some states, as detailed above, were interested in certain kinks much more than others. We also found several less-kinky states — states that showed no interest (a search value of zero) in a high number of our included kinks. The least popular kink, with a search value of zero in 39 of the 50 states, was orgasm control. People don’t want to have to wait for their pleasure.

From there, the least kinky states are as follows.

The remaining states (California, Florida, Georgia, Illinois, Michigan, New Jersey, New York, North Carolina, Ohio, Pennsylvania, Texas, and Virginia) all searched at least a little bit for every one of the 24 kinks on our list.

The kinkiest state in the U.S.

Each state we looked at had their unique blend of kinks and fetishes. By adding up the search values for each kink, we determined which had the most investment in their kinks. Here are the top 10, based on the combined search value:

Overall, Oregon had the highest combined search value for all 24 kinks, meaning they do the most searching for kink-related content. By having three kinks with a search value of 100, they also tied with Alaska for having the biggest number of highly searched “most popular” kinks. So while Alaska had a low search value for many kinks, they went all the way for their interests.

Even if discussing kinks makes you squeamish, let’s not be too quick to judge Oregonians — or, for that matter, anyone else. There’s no place for “normal” when it comes to personal sexual preferences in our contemporary society. In terms of sexuality, the new normal is whatever two or more adults decide is safe and consensual.

To be clear, having an addiction to sex or pornography isn’t healthy. But neither is sexual repression. In fact, an inability to express our sexuality in a gratifying manner can actually be the precursor to sex-based addictions and a range of other psychological challenges.

By analyzing Google Trends search data, we sought to identify the most popular kinks or fetishes in all 50 states. We set a 12-month time period (September 1, 2021–September 1, 2022) and used the numerical search values to determine which kinks were searched for the most in each state. Then, we analyzed the data to discover which kinks were the most popular in which states and which states were the most or least kinky based on the sum of their search values for all of the 24 included kinks.

Innerbody Research is committed to providing objective, science-based suggestions, and research to help our readers make more informed decisions regarding health and wellness. We invested the time and effort into creating this report to spark interesting conversations around sexual curiosity and experimentation. We hope to reach as many people as possible by making this information widely available. As such, please feel free to share our content for educational, editorial, or discussion purposes. We only ask that you link back to this page and credit the author as Innerbody.com.