The eye is one of the most complex and important sensory organs in the human body. It provides the ability to see in both bright and dim light, focusing on objects both near and far. Its three types of cone cells are able to distinguish millions of distinct colors and produce the high quality images that the body relies on for many daily activities.

The eyes are a pair of spherical organs located within the orbits of the skull. Continue Scrolling To Read More Below... 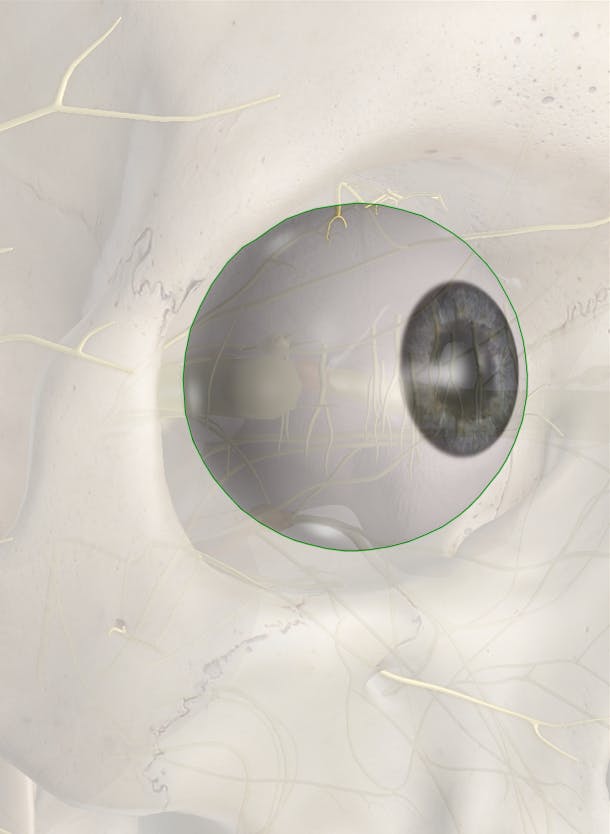 Continued From Above... Each eye is roughly 1 inch (2.5 cm) in diameter and fills most of the space within the orbit. Three distinct tissue layers — the fibrous, vascular, and nervous tunics — make up the wall of the eye and surround its gel-filled center.

The fibrous tunic forms the outermost layer of the eye and is instrumental in protecting its delicate inner tissues.

Deep to the fibrous tunic is the vascular tunic that provides blood supply to the eye. It has three major parts: the choroid, ciliary body, and iris.

The lens is a large, clear mass of protein fibers found just posterior to the iris. It is connected to the ciliary body by many tiny fibers known as zonular fibers. The lens is extremely flexible and changes its shape when the ciliary body pulls on its edges.

The innermost layer of the eye is formed by the nervous tunic, or retina. It is a thin, delicate layer of nervous tissue that is loosely connected to the choroid. Millions of photoreceptor cells, bipolar cells, and ganglion cells are distributed throughout the retina to detect light and transmit visual information to the brain. The macula lutea is the region of central vision, which contains the fovea. The fovea is an important region of the retina, as it contains the highest concentration of photoreceptors in the eye. Nervous tissue in the retina is connected to the brain through the optic nerve, which passes through a hole in the choroid and sclera in the posterior of the eye. Where the optic nerve forms there are no photoreceptors, resulting in a blind spot known as the optic disk.

The lens divides the interior of the eye into two regions: the anterior chamber and the vitreous chamber.

Physiology of the Eye

The overall function of the eye is to act like a biological camera—it absorbs light and translates images into nerve signals to conduct to the brain. Light entering the eye first passes through the cornea, where it is refracted to begin the process of focusing. It next passes through the pupil, where the contraction of muscles in the iris controls the size of the pupil and the amount of light entering the eye. Light passes through the lens, where it is further refracted to focus on the retina. Contractions of the ciliary muscles pull on the zonular fibers and the lens, allowing the lens to accommodate vision at varying differences. To view objects that are close to the eye, the ciliary muscles relax and permit the lens to assume a wide shape. The wide shape of the lens allows it to refract the light to a high degree to focus on the retina. For distant objects, the ciliary muscles pull on the lens to flatten it, reducing the amount of refraction and focusing distant light on the retina.

Once light has passed through the lens, it continues through the vitreous humor and passes through the retina. Photoreceptor cells in the retina are specialized to detect light and produce nerve signals in response to light. Rods are the more numerous and sensitive of the photoreceptors and are specialized for seeing in low-light situations. They produce grayscale images in low light, but are overwhelmed by light during the day or in a normally lit room at night. Cones, on the other hand, are specialized for detecting light in brighter conditions and are able to differentiate colors. The three types of cone cells — red, green, and blue — are able to detect specific colors, or wavelengths, of light. The combination of the three types of cone cells produces all of the colors that the human eye can detect. Once the photoreceptors have detected light, the cells produce an action potential that is conducted to bipolar cells and ganglion cells in the retina. These cells transmit the signal into the optic nerve, where it travels to the brain to be processed.

After light has passed through the retina, it is absorbed by the choroid. The choroid prevents excess light from remaining within the eye and forming afterimages. High intensity lights can overcome the absorptive effects of the choroid, resulting in the “red eye” seen in pictures.

Our eyes are susceptible to many health problems—astigmatism, infection, nearsightedness, cataracts, glaucoma and macular degeneration, to name a few. Learn more about how DNA health tests can tell you if you have a genetically higher risk of developing macular degeneration.