The nervous system consists of the brain, spinal cord, sensory organs, and all of the nerves that connect these organs with the rest of the body. Together, these organs are responsible for the control of the body and communication among its parts. The brain and spinal cord form the control center known as the central nervous system (CNS), where information is evaluated and decisions made. The sensory nerves and sense organs of the peripheral nervous system (PNS) monitor Continue Scrolling To Read More Below... 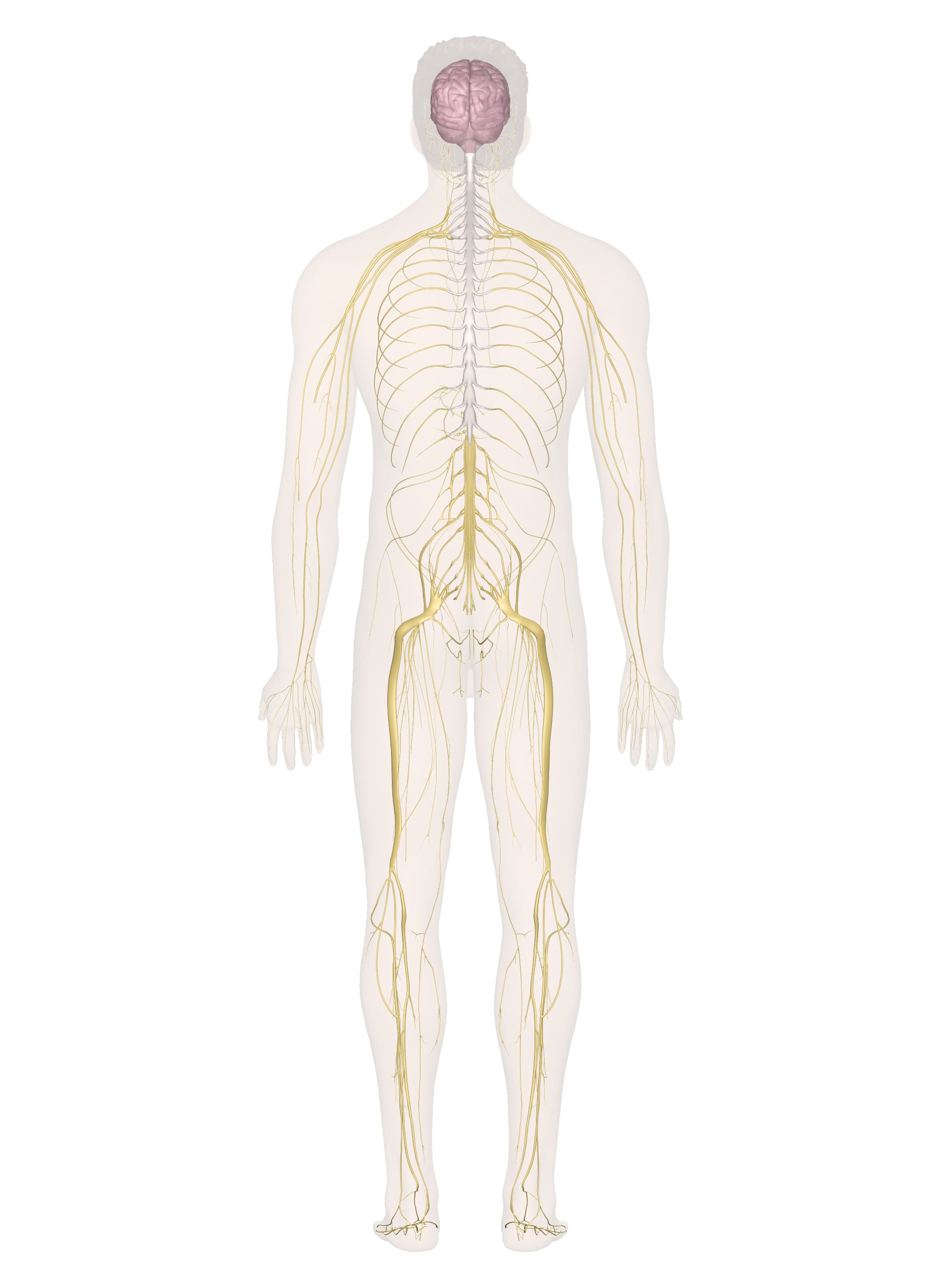 Continued From Above... conditions inside and outside of the body and send this information to the CNS. Efferent nerves in the PNS carry signals from the control center to the muscles, glands, and organs to regulate their functions.

The majority of the nervous system is tissue made up of two classes of cells: neurons and neuroglia.

Neurons, also known as nerve cells, communicate within the body by transmitting electrochemical signals. Neurons look quite different from other cells in the body due to the many long cellular processes that extend from their central cell body. The cell body is the roughly round part of a neuron that contains the nucleus, mitochondria, and most of the cellular organelles. Small tree-like structures called dendrites extend from the cell body to pick up stimuli from the environment, other neurons, or sensory receptor cells. Long transmitting processes called axons extend from the cell body to send signals onward to other neurons or effector cells in the body.

Neuroglia, also known as glial cells, act as the “helper” cells of the nervous system. Each neuron in the body is surrounded by anywhere from 6 to 60 neuroglia that protect, feed, and insulate the neuron. Because neurons are extremely specialized cells that are essential to body function and almost never reproduce, neuroglia are vital to maintaining a functional nervous system.

The brain, a soft, wrinkled organ that weighs about 3 pounds, is located inside the cranial cavity, where the bones of the skull surround and protect it. The approximately 100 billion neurons of the brain form the main control center of the body. The brain and spinal cord together form the central nervous system (CNS), where information is processed and responses originate. The brain, the seat of higher mental functions such as consciousness, memory, planning, and voluntary actions, also controls lower body functions such as the maintenance of respiration, heart rate, blood pressure, and digestion.

The meninges are the protective coverings of the central nervous system (CNS). They consist of three layers: the dura mater, arachnoid mater, and pia mater.

The space surrounding the organs of the CNS is filled with a clear fluid known as cerebrospinal fluid (CSF). CSF is formed from blood plasma by special structures called choroid plexuses. The choroid plexuses contain many capillaries lined with epithelial tissue that filters blood plasma and allows the filtered fluid to enter the space around the brain.

Newly created CSF flows through the inside of the brain in hollow spaces called ventricles and through a small cavity in the middle of the spinal cord called the central canal. CSF also flows through the subarachnoid space around the outside of the brain and spinal cord. CSF is constantly produced at the choroid plexuses and is reabsorbed into the bloodstream at structures called arachnoid villi.

All of the bodies’ many sense organs are components of the nervous system. What are known as the special senses—vision, taste, smell, hearing, and balance—are all detected by specialized organs such as the eyes, taste buds, and olfactory epithelium. Sensory receptors for the general senses like touch, temperature, and pain are found throughout most of the body. All of the sensory receptors of the body are connected to afferent neurons that carry their sensory information to the CNS to be processed and integrated.

Functions of the Nervous System

The nervous system has 3 main functions: sensory, integration, and motor.

Unfortunately of course, our nervous system doesn’t always function as it should. Sometimes this is the result of diseases like Alzheimer’s and Parkinson’s disease. Did you know that DNA health testing can help you discover your genetic risk of acquiring certain health conditions that affect the organs of our nervous system? Late-onset Alzheimer’s, Parkinson’s disease, macular degeneration - visit our section about DNA testing to find out more.

Divisions of the Nervous System

The brain and spinal cord together form the central nervous system, or CNS. The CNS acts as the control center of the body by providing its processing, memory, and regulation systems. The CNS takes in all of the conscious and subconscious sensory information from the body’s sensory receptors to stay aware of the body’s internal and external conditions. Using this sensory information, it makes decisions about both conscious and subconscious actions to take to maintain the body’s homeostasis and ensure its survival. The CNS is also responsible for the higher functions of the nervous system such as language, creativity, expression, emotions, and personality. The brain is the seat of consciousness and determines who we are as individuals.

The somatic nervous system (SNS) is a division of the PNS that includes all of the voluntary efferent neurons. The SNS is the only consciously controlled part of the PNS and is responsible for stimulating skeletal muscles in the body.

The autonomic nervous system (ANS) is a division of the PNS that includes all of the involuntary efferent neurons. The ANS controls subconscious effectors such as visceral muscle tissue, cardiac muscle tissue, and glandular tissue.

There are 2 divisions of the autonomic nervous system in the body: the sympathetic and parasympathetic divisions.

The enteric nervous system (ENS) is the division of the ANS that is responsible for regulating digestion and the function of the digestive organs. The ENS receives signals from the central nervous system through both the sympathetic and parasympathetic divisions of the autonomic nervous system to help regulate its functions. However, the ENS mostly works independently of the CNS and continues to function without any outside input. For this reason, the ENS is often called the “brain of the gut” or the body’s “second brain.” The ENS is an immense system—almost as many neurons exist in the ENS as in the spinal cord.

Neurons function through the generation and propagation of electrochemical signals known as action potentials (APs). An AP is created by the movement of sodium and potassium ions through the membrane of neurons. (See Water and Electrolytes.)

The axons of many neurons are covered by a coating of insulation known as myelin to increase the speed of nerve conduction throughout the body. Myelin is formed by 2 types of glial cells: Schwann cells in the PNS and oligodendrocytes in the CNS. In both cases, the glial cells wrap their plasma membrane around the axon many times to form a thick covering of lipids. The development of these myelin sheaths is known as myelination.

Myelination speeds up the movement of APs in the axon by reducing the number of APs that must form for a signal to reach the end of an axon. The myelination process begins speeding up nerve conduction in fetal development and continues into early adulthood. Myelinated axons appear white due to the presence of lipids and form the white matter of the inner brain and outer spinal cord. White matter is specialized for carrying information quickly through the brain and spinal cord. The gray matter of the brain and spinal cord are the unmyelinated integration centers where information is processed.

Reflexes are fast, involuntary responses to stimuli. The most well known reflex is the patellar reflex, which is checked when a physicians taps on a patient’s knee during a physical examination. Reflexes are integrated in the gray matter of the spinal cord or in the brain stem. Reflexes allow the body to respond to stimuli very quickly by sending responses to effectors before the nerve signals reach the conscious parts of the brain. This explains why people will often pull their hands away from a hot object before they realize they are in pain.

Functions of the Cranial Nerves

Each of the 12 cranial nerves has a specific function within the nervous system.

All sensory receptors can be classified by their structure and by the type of stimulus that they detect. Structurally, there are 3 classes of sensory receptors: free nerve endings, encapsulated nerve endings, and specialized cells. Free nerve endings are simply free dendrites at the end of a neuron that extend into a tissue. Pain, heat, and cold are all sensed through free nerve endings. An encapsulated nerve ending is a free nerve ending wrapped in a round capsule of connective tissue. When the capsule is deformed by touch or pressure, the neuron is stimulated to send signals to the CNS. Specialized cells detect stimuli from the 5 special senses: vision, hearing, balance, smell, and taste. Each of the special senses has its own unique sensory cells—such as rods and cones in the retina to detect light for the sense of vision.