The C1 vertebra, known as the atlas, is the superior-most vertebra in the spinal column. It plays vital roles in the support of the skull, spinal cord, and vertebral arteries and provides attachment points for several muscles of the neck.

The C1, or first cervical vertebra, is commonly called the atlas due to its unique position in the spine. In Greek mythology, Atlas was the titan who held the Earth on his shoulders, just like the atlas holds the skull on top of the neck. Continue Scrolling To Read More Below... 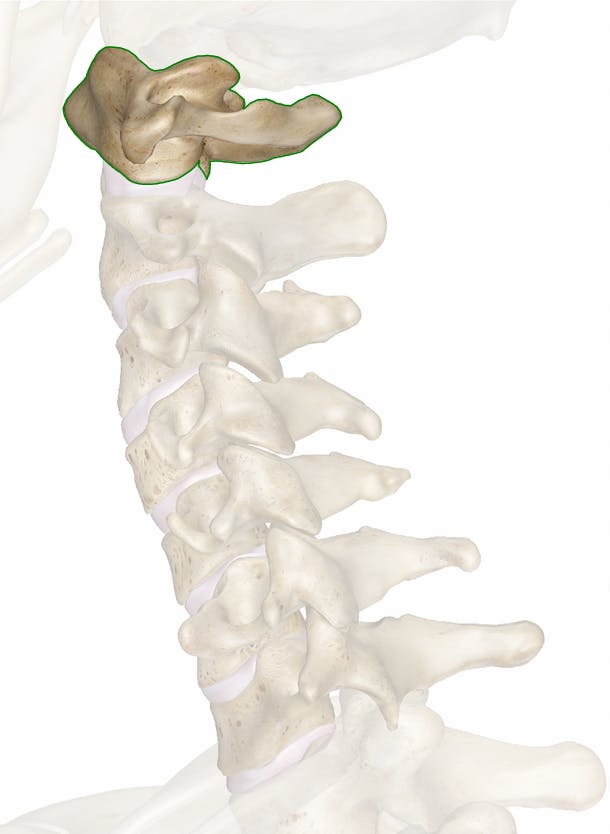 Continued From Above... The atlas is located at the top of the neck, just inferior to the condyles of the occipital bone of the skull and superior to the C2 vertebra.

The atlas plays a vital role in the support and movement of the head and neck. Several muscles in the neck pivot the skull at the atlanto-occipital joint to make the head flex and extend in a nodding motion. Of these muscles, the longus colli muscle inserts at the anterior tubercle of the atlas and the rectus capitis posterior muscle arises from the posterior tubercle. Lateral flexion, or rotating the head from side to side, requires pivoting of the skull and atlas at the atlanto-axial joint. Many neck muscles work together to rotate the head, but several of these muscles — including the rectus capitis lateralis and obliquus capitis superior — arise from the transverse processes of the atlas. In addition, several intertransversarii muscles connect the transverse processes of the atlas to those of the axis, allowing lateral flexion of the entire neck to pull the head laterally toward one of the shoulders.

The atlas also plays a vital role in the protection of the delicate structures of the neck. The spinal cord and spinal nerves that pass through the vertebral foramen of the neck are shielded from physical injury by the bony ring of the atlas. Compared to the other vertebrae of the spine, the vertebral foramen is much larger in the atlas, providing significant space for movement of the soft nervous tissue during flexion and rotation of the head and neck. The transverse foramina also play an important protective role for the vertebral arteries and veins that provide vital blood flow to and from the brain. The bony tissue of the transverse processes of the atlas prevents these blood vessels from being compressed or damaged on their way through the neck.