Getting the Most out of Online Therapy

The 10 Best and Worst States for Telehealth

Most Vulnerable States in a COVID-19 Pandemic

What classic candies are Americans hungry for this Halloween? By analyzing Google search data, we discovered a broad range of likes — and one we all hate.

Americans really love sugar. The average American consumes more than 126 grams (0.28lbs) of sugar daily, or about three regular-sized Snickers bars. According to the American Heart Association, most adult women should consume less than 24 grams of sugar per day, and, for most adult men, it should be no more than 36 grams per day.

Luckily for candy lovers (and manufacturers), our favorite sugary drinks are primarily responsible for our overconsumption of sugar. The average 20-ounce bottle of a sugar-sweetened beverage contains about 65 grams (0.14lbs) of added sugar, typically from high-fructose corn syrup. After sugar-sweetened beverages, Americans get most of their excess sugar from desserts and sweet snacks (such as cookies, brownies, cakes, pies, and ice cream). However, this doesn’t mean that candy is entirely off the hook.

With Halloween just around the corner, we wanted to know which U.S. states would likely be eating the most candy and their candy of choice among the 24 most popular brands.

America’s most and least liked candies: an overview 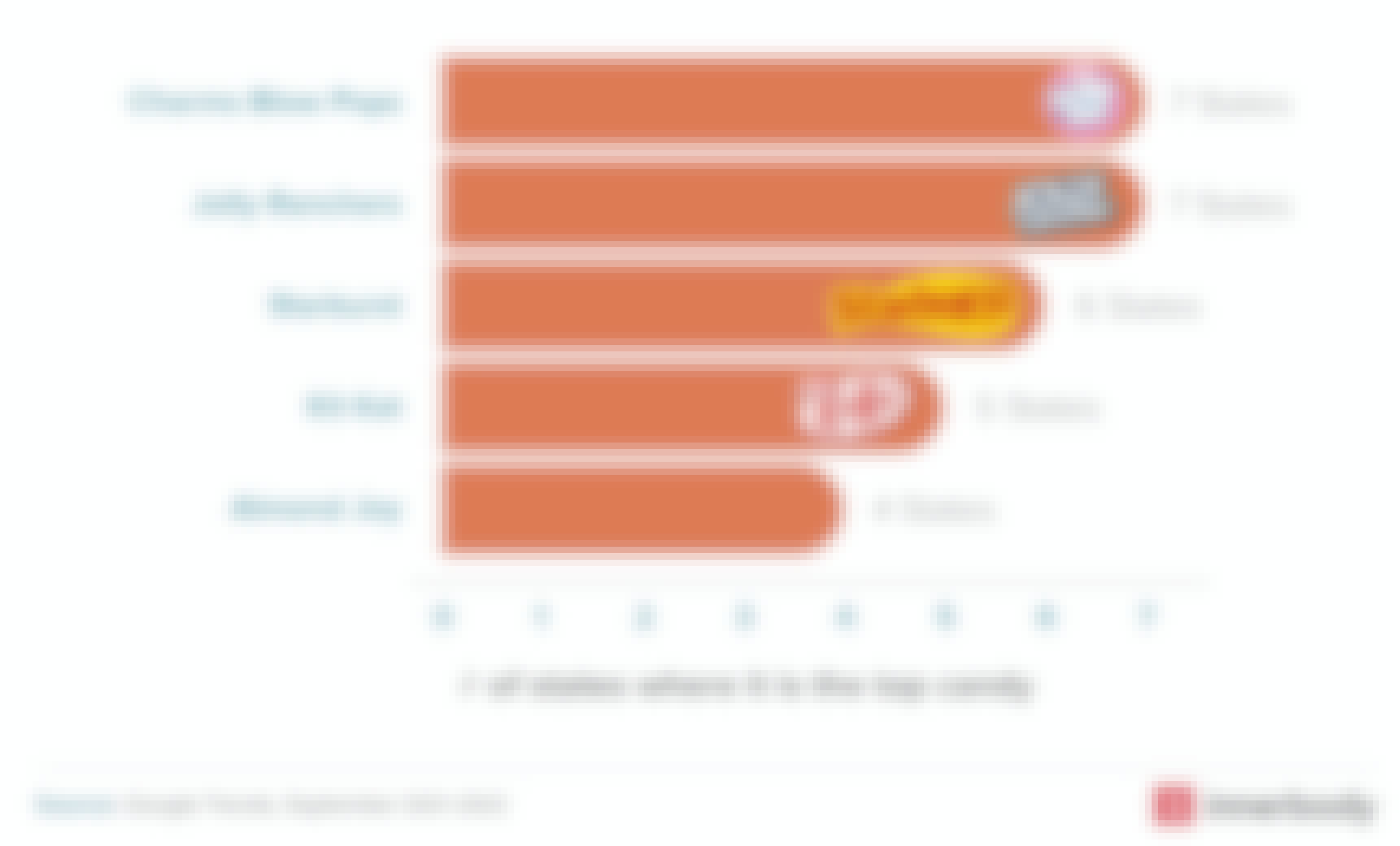 The U.S. chocolate market is worth nearly 50 billion dollars, so it’s safe to say that Americans love their candy. Whether it’s Halloween, Christmas, Easter, or Valentine’s Day, Americans across the board also significantly increase their spending on candy during the holidays. With an increase of almost 50% during the eight weeks leading up to October 31, 2021, Halloween typically sparks the biggest seasonal chocolate sales increase. And during this year’s Halloween season, Americans are predicted to spend 3.1 billion dollars on candy.

Candy was brought in as the trick-or-treat go-to in the 1950s; helping candy’s cause was the emergence of the “Halloween sadists” myth in the 1970s: poisoned popcorn balls, pins baked into cookies, razor blades hidden in apples, etc. Suddenly, treats that weren’t factory-sealed were considered unsafe. And since then, Americans have increasingly gravitated toward trusted store-bought candy.

We wanted to find out what types of candy Americans are most interested in and what types they avoid, and whether or not these trends skewed national or if there were regional or state-wide preferences.

After analyzing the Google Trends search data of all 50 states, we discovered that Charms Blow Pops and Jolly Ranchers were tied for the type of candy of greatest interest to the most states (seven). In second place was Starburst (six states), Kit Kat (five states) stole third place, and Almond Joy (four states) was our runner-up.

Most popular candy in the U.S. 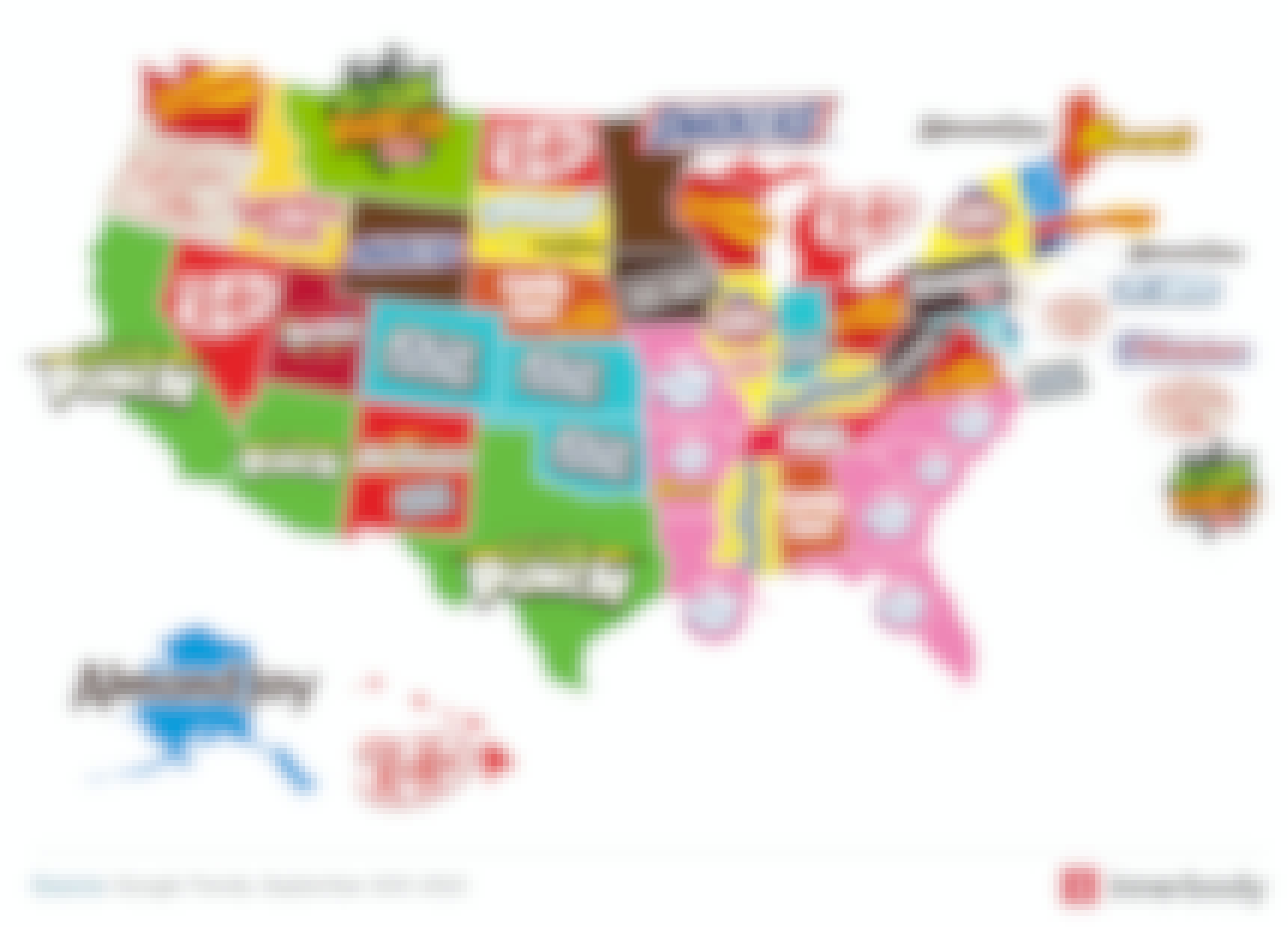 Americans, it seems, are plenty willing to spend some of their hard-earned money on sweets. We broke down the data even further to find out which ones they’re most likely to splurge on.

For reference, the numbers in parenthesis we mention are generated by Google Trends and represent how popular a given term is. A value of 100 is the peak popularity of the term specified, while a value of 50 means that term is half as popular.

After crunching the numbers, we found that one candy in particular dominated many of the Southern States: Charms Blow Pops, which was favored by South Carolina (77), North Carolina (79), Louisiana (84), Georgia (81), Florida (68), and Missouri (95). However, Arkansas was equally enamored by Charms Blow Pops (100) and Reese’s Cups (100).

Tied with Charms Blow Pops for the favored candy in seven states was Jolly Ranchers. As one of America’s favorite hard candies, Jolly Ranchers was searched for the most in Colorado (77), the District of Columbia (93), Indiana (98), Kansas (100), Maryland (80), and Oklahoma (95) with one exception: in New Mexico, candy lovers searched equally for Jolly Ranchers (100) and Hot Tamales (100).

Most states with a uniform opinion about these simple, sweet candies are located in the South, the Midwest, or along the East Coast. Given that (save for Florida) none of these are major fruit-producing states, this could explain their strong preference for these classic fruit-flavored candies. California (Sour Punch Straws) and Washington (Starbursts) alone contain more than half of the fruit-producing acreage in the U.S. At the same time,Michigan (Kit Kat), New York (Dubble Bubble Gum), Oregon (Salt Water Taffy), Pennsylvania (Hershey Kisses and Swedish Fish), and Texas (Sour Punch Straws) also contribute a significant percentage of our nation’s fruits. A plain fruit flavor in a simple sugar base may be best when fresh fruit isn’t something you can reach out and grab.

Despite being an equally fruity sweet with a chewy twist, Starburst lovers were more spread out:

Staking a claim as the third largest corn producer in the U.S., Nebraskans had an equal affinity for Candy Corn (100).

We found a preference for chocolate in a handful of the chillier states: Alaska (80), Rhode Island (99), Vermont (78), and New Hampshire (100), where searchers were most interested in Almond Joy. But a similar preference appeared in two of the warmest states: Hawaii (64) and Nevada (87), where it was Kit Kat that had people searching. Michigan (85) and North Dakota (96), which both experience freezing winters, would also be happy with a Kit Kat in their trick-or-treat bags this year.

Throughout the rest of the U.S., we found a wide range of tastes, with no more than three states sharing a preference for a single type of candy:

Least popular candy in the U.S. 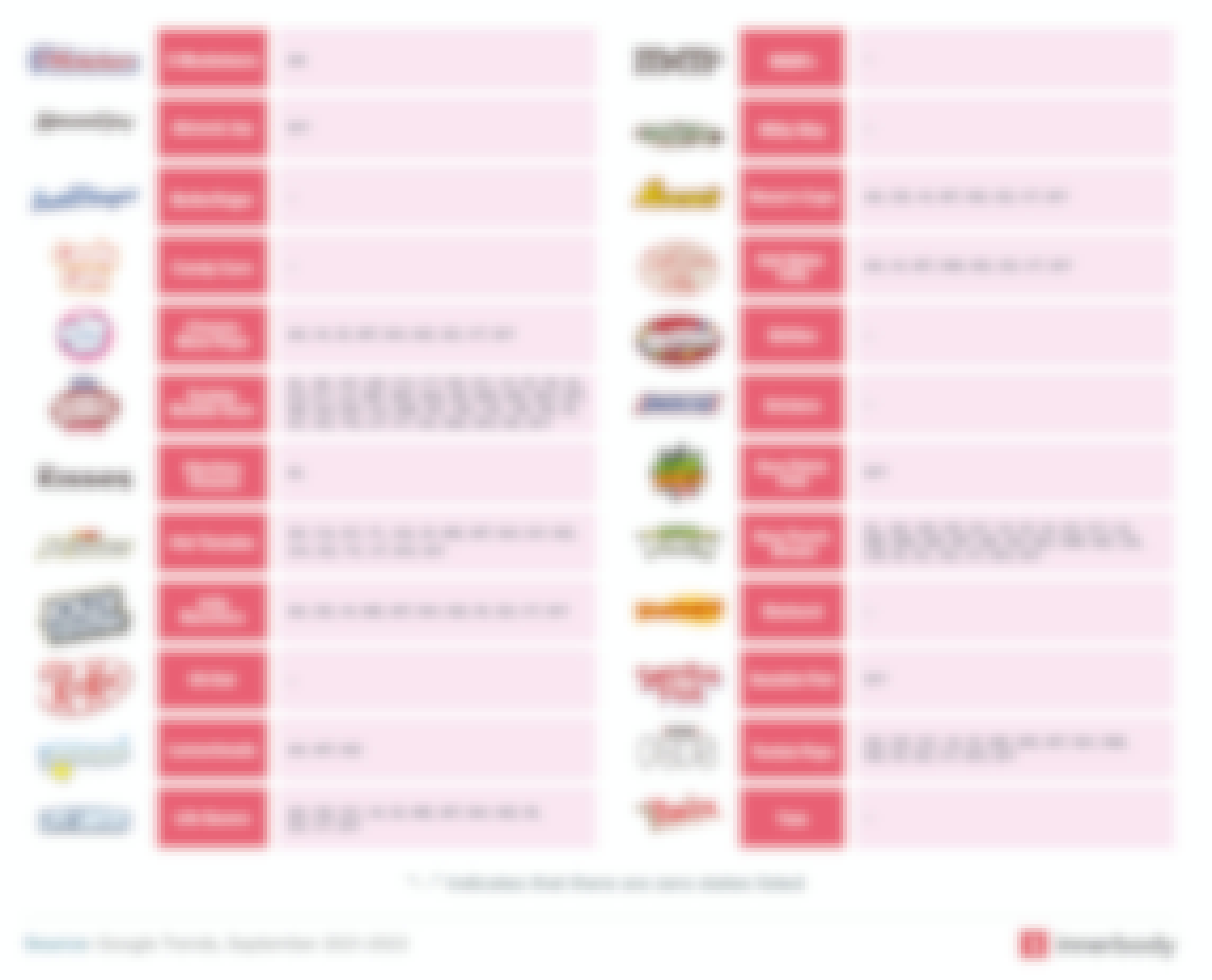 Some states were interested in certain candies much more than others, but we also found many states that showed no interest in several sweets we analyzed. The least-desired candy on our list, with a search value of zero in 44 of the 50 states, was Dubble Bubble Gum.

According to the American Dental Association (ADA), the practice of chewing gum (or gum-like substances) has been around for thousands of years, and chewing sugarless gum can actually contribute to good dental health by increasing the production of saliva, which then dilutes and neutralizes certain acids produced by the bacteria contained in plaque.

However, Dubble Bubble — with its rock-hard texture and flash of tooth-aching sweetness, usually followed by a total absence of flavor — is not sugar-free and is therefore not recommended by the ADA for improving dental health. Aside from its struggles keeping flavor around, this heavy-handed dose of sugar could be part of why it appears to be of so little interest to candy lovers across the U.S.

The decline of real sugar

The vast majority of states (44 of 50) were found to have a zero search value for Dubble Bubble Gum. However, this doesn’t prove that Dubble Bubble itself is what people could happily do without. Of those 44 states, 28 had a search value of zero for at least one other type of candy.

People in the U.S, overall, are purchasing fewer foods and beverages that contain caloric sweeteners (table sugar). At the same time, purchases of products including table sugar and nonnutritive sweeteners (such as aspartame, saccharin, and sucralose) have increased. It isn’t necessarily sweets Americans are becoming less interested in but the high-calorie-count candies and drinks that often contain real sugar.

The 16 states with a zero search value for Dubble Bubble Gum only were:

Wyoming was the only state that was also disinterested in Swedish Fish and Sour Patch Kids.

We also found seven states that searched for all 24 varieties of candy in the past year. None of the seven, though, ended up in the top five most candy-loving states, suggesting that these states have a more broad but less intense interest in sweets and treats. Interestingly, all seven also showed the lowest level of interest (the lowest search value) for the same type of candy: Hot Tamales.

According to a statement released on April 13, 2020 by the manufacturer of Hot Tamales, Just Born Quality Confections, the company temporarily suspended production of the beloved cinnamon candy after a 40-year run due to the COVID-19 pandemic. The statement did not definitively say when production would recommence, and perhaps this ambiguity and temporary inability to readily purchase Hot Tamales has driven down interest in the product.

The types of candy most appealing to each state differ not only by region but by individual state. We have also seen distinct clusters of preferences:

One state, though, had to have the biggest sweet tooth based on the sum of their search values for each candy.

By analyzing Google Trends search data, we sought to identify the most popular candies in all 50 states. We set a 12-month time period (September 14, 2021–September 14, 2022) and used the numerical search values to determine which popular brands of candy were searched for the most in each state. Then, we analyzed the data to discover which candies were the most popular in which states, as well as which states were the most interested in candy based on the sum of their search values for all of the 24 included candy varieties.

Innerbody Research is committed to providing objective, science-based suggestions, and research to help our readers make more informed decisions regarding health and wellness. We created this report to spark fun conversations around state rankings for different topics, such as candy popularity, and hope to reach as many people as possible by making this information widely available. As such, please feel free to share our content for educational, editorial, or discussion purposes. We only ask that you link back to this page and credit the author as Innerbody.com.