Also known as the oral cavity, the mouth is the hollow cavity that allows food and air to enter the body. The mouth contains many other organs - such as the teeth, tongue, and the ducts of the salivary glands - that work together to aid in the ingestion and digestion of food. The mouth also plays a major role in the production of speech through the movements of the tongue, lips and cheeks.

The mouth is a hollow cavity formed by the space between the lips, cheeks, tongue, hard and soft palates and the throat. Its external opening is located along the body’s midline inferior to the nose and superior to the chin. Continue Scrolling To Read More Below... 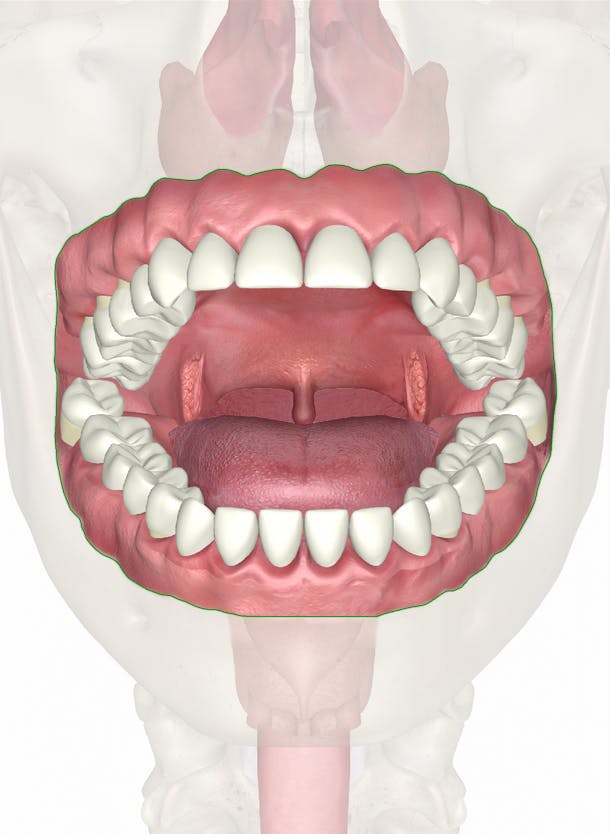 Continued From Above... The external opening of the mouth is usually much longer in the horizontal plane, but may be extended through the movement of the jaw to become nearly as wide in the vertical plane as well.

The lips are soft, fleshy structures that form the anterior border of the external opening of the mouth. The lips are very flexible and elastic structures and contain many collagen and elastin fibers and adipose tissue covered by a thin layer of stratified squamous epithelium. The exterior of the lips is continuous with the skin and is covered by keratinized epithelium, while the inner surface is continuous with the mucous membrane of the mouth and is covered by nonkeratinized epithelium.

Lateral to the lips are the cheeks, which are fleshy structures that form the sides of the mouth. Similar to the lips, the exterior of the cheeks is covered in keratinized stratified squamous epithelium continuous with the skin and the interior is covered in nonkeratinized stratified squamous epithelium continuous with the mucous membrane. Between the epithelium layers are layers of connective tissues, nerves, and muscles. In particular the muscles of the cheeks include the buccinator, orbicularis oris and zygomaticus major, which move the lips and cheeks.

The tongue forms the inferior portion of the mouth, but often moves throughout the mouth to occupy almost any region of the hollow cavity. While many people think of the tongue as a muscle, it is actually an organ made of epithelium, several skeletal muscles, nerves, and connective tissues. The tongue contains many small ridges known as papillae that help it to grip and move food around the mouth. Taste buds are hidden in valleys around some of the papillae and produce the sense of taste by detecting chemicals found in food. The tongue also helps to produce speech by altering or stopping the flow of air through the mouth to produce the sounds of many consonants.

The hard and soft palates form the roof of the mouth. On the anterior end of the mouth, the hard palate is formed by the inferior surface of the maxillae and palatine bones. These bones are covered with a thin layer of connective tissues and mucous membranes, which form small wrinkles. The roof of the mouth continues posteriorly as the soft palate, a flexible fleshy mass of tissues that ends in the uvula. The hard and soft palates work together to separate the mouth from the nasal cavity. The soft palate moves superiorly during swallowing to cover the nasopharynx of the throat, preventing food from entering the nasal cavity.

The throat, or pharynx, is a funnel-shaped tube located in the posterior of the mouth. The pharynx connects the nasal cavity and mouth to the esophagus and larynx in the neck. The region of the throat behind the mouth is known as the oropharynx and forms the posterior wall of the mouth. Food in the mouth is swallowed into the oropharynx and passed on to the esophagus and the rest of the gastrointestinal tract. Air inhaled through the mouth or nose also passes through the pharynx on its way to the larynx, and then passes through the pharynx on its way out of the body during exhalation.

Inside the mouth are several structures that aid in the digestion of food. Teeth are hard structures specialized for the biting and grinding of food (known as mastication, or chewing). They form a continuous row in the bottom of the mouth surrounding the tongue on the lateral and anterior sides, as well as another nearly identical row extending from the roof of the mouth. Teeth form deep roots into the bones of the maxillae and the mandible, but grow out through the gums of the mouth to form biting surfaces. The gums, or gingiva, are soft mucous membranes surrounding the teeth, protecting the roots from decay and helping to hold the teeth in place. Finally, many salivary glands surround the mouth and release their secretion, saliva, into the mouth through many tiny ducts. Saliva helps to moisten and chemically digest food in the mouth before it is swallowed. Saliva also protects the teeth from decay by digesting and washing away tiny bits of food that become stuck to the teeth.