Digestive System of the Lower Torso

The digestive organs of the lower torso include lower gastrointestinal (GI) tract, which consists of the small intestine, large intestine, and anus. Several accessory organs, such as the liver and pancreas, assist the lower GI tract with the digestion of food to release many essential nutrients. By the time this food exits the lower GI tract through the anus, the food has been completely digested and almost all of the nutrients have been absorbed into the bloodstream. Bacteria assist with the digestion of food and its conversion into feces while water is absorbed to leave only solid waste material to be excreted. Continue Scrolling To Read More Below... 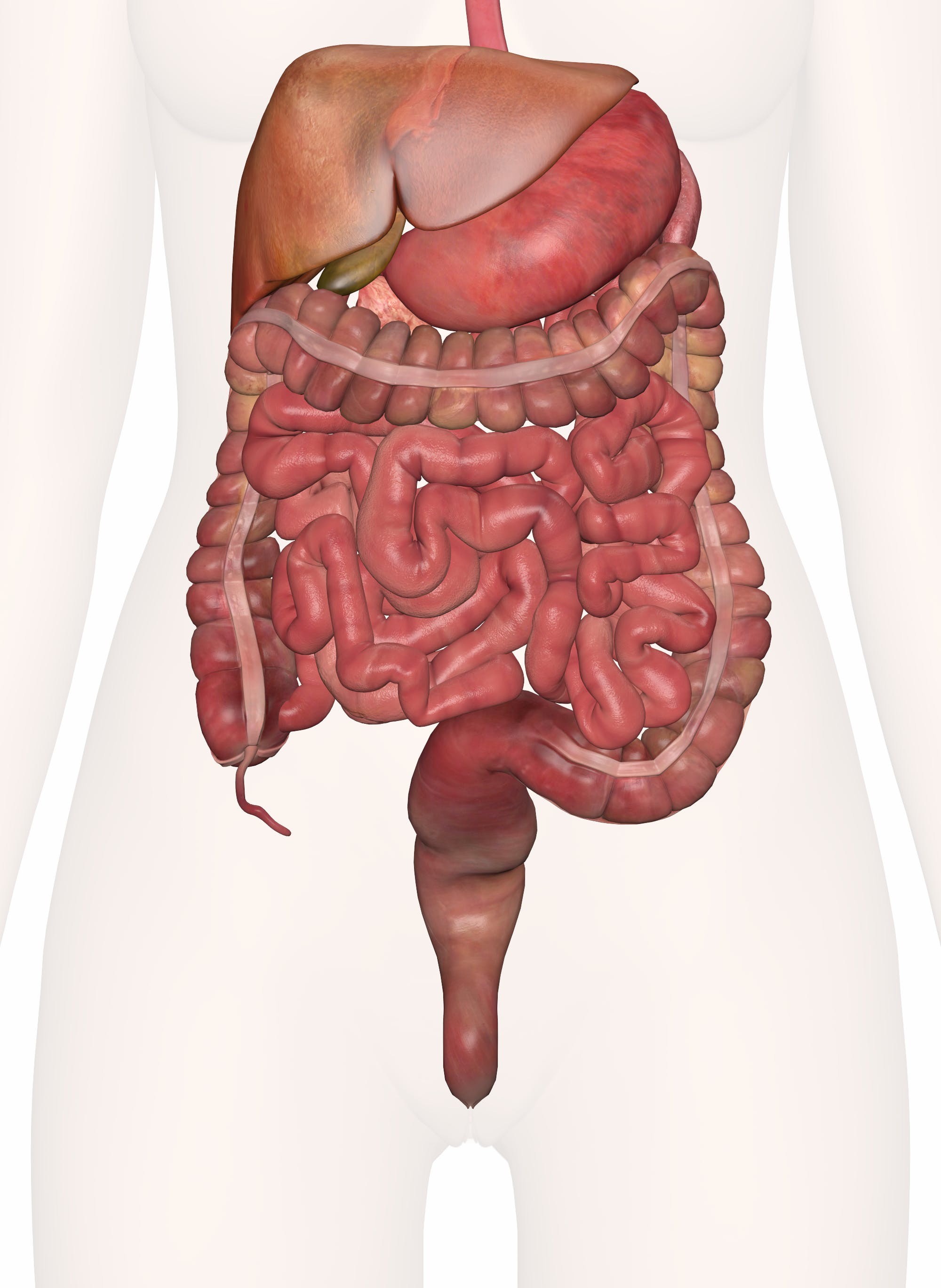 Acidic, partially digested food known as chyme reaches the lower GI tract through the pyloric sphincter of the stomach. Chyme passing through the pyloric sphincter first enters the duodenum, a one-foot long, C-shaped segment of the small intestine located inferior to and to the right of the stomach. In addition to chyme, the duodenum also receives bile from the gallbladder and liver, as well as pancreatic juice from the pancreas. Bile and pancreatic juice mix with chyme in the duodenum to neutralize the chyme’s acidity, emulsify lipids, and chemically digest the chyme into its most basic building blocks.

A small amount of absorption of nutrients also takes place in the walls of the duodenum, but most of the absorption takes place in the jejunum. The jejunum is the eight-foot long, convoluted middle section of the small intestine that is located between the duodenum and the ileum. Chyme entering the jejunum has been thoroughly digested and is ready to have its nutrients absorbed through the intestinal mucosa. The mucosa of the jejunum contains many finger-like projections, or villi, along with many circular folds along its length. These structures greatly increase the surface area of the jejunum, which increases the jejunum’s ability to absorb nutrients. By the time chyme moves from the jejunum to the ileum, about 90% of its nutrient content has been absorbed into the bloodstream.

Chyme continues along the length of the small intestine and enters the ileum, a highly folded, 10-foot long tube that leads to the cecum of the large intestine. Chyme entering the ileum is very low in nutrients, so the ileum is specialized for the absorption of the very last remaining traces of nutrients before moving the chyme on to the large intestine. The ileum contains villi and folds similar to the jejunum to increase its surface area and to increase the absorption of nutrients. Small masses of lymphatic tissue known as Peyer’s patches line the ileum and monitor the contents of the intestines for pathogens to prevent illness.

Upon reaching the end of the ileum, chyme passes through the ileocecal sphincter and enters the large intestine. The cecum is a dead-end pouch on the right inferior end of the large intestine. Chyme entering the cecum is mixed with bacterial flora to produce feces. The feces are slowly moved by peristalsis out of the cecum and into the ascending colon while bacteria begin to break down indigestible waste material. Attached to the inferior end of the cecum is the vermiform appendix, a thin tube that stores beneficial bacteria. Feces next pass through the colon, the longest section of the large intestine that extends from the cecum to the rectum. There are four major regions of the colon: the ascending colon, transverse colon, descending colon, and sigmoid colon. The ascending colon connects to the cecum and runs superiorly toward the right inferior corner of the liver. Just below the liver, the ascending colon turns to the left and becomes the transverse colon. The transverse colon crosses to the left side of the abdomen, turns to the downward, and becomes the descending colon. The descending colon runs down the left side of the abdomen to the sigmoid colon. Finally, the sigmoid colon forms an S-shaped end to the colon that terminates in the rectum.

Feces passing through the large intestine are mixed with and fermented by bacteria. The bacteria release B vitamins and vitamin K from the feces as they move along the length of the colon. The smooth walls of the colon absorb the released vitamins along with water and any other remaining nutrients. By the time that feces reach the end of the colon, they have been dried, condensed, and stripped of all vitamins and nutrients.