The large intestine wraps around the border of the abdominal body cavity from the right side of the body, across the top of the abdomen, and finally down the left side. Continue Scrolling To Read More Below... 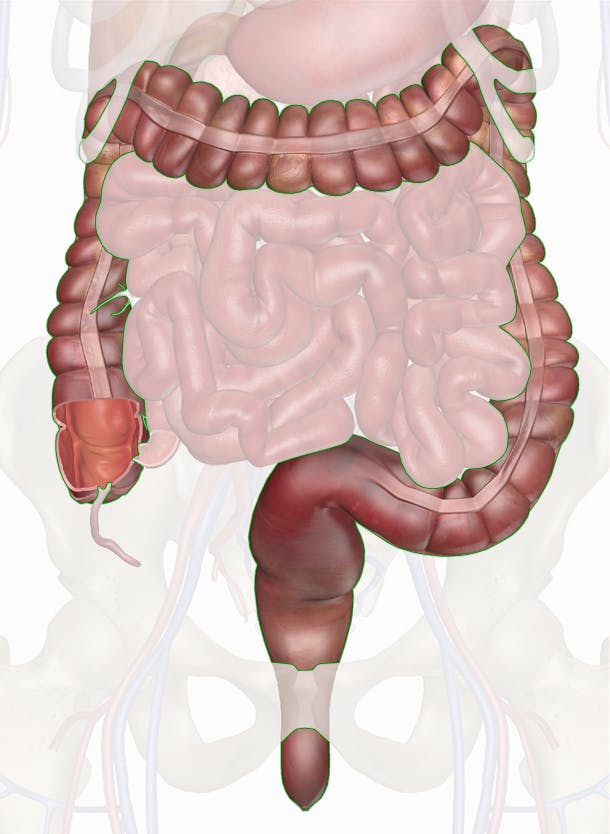 Like the rest of the gastrointestinal canal, the large intestine is made of four tissue layers:

The large intestine performs the vital functions of converting food into feces, absorbing essential vitamins produced by gut bacteria, and reclaiming water from feces. A slurry of digested food, known as chyme, enters the large intestine from the small intestine via the ileocecal sphincter. Chyme passes through the cecum where it is mixed with beneficial bacteria that have colonized the large intestine throughout a person’s lifetime. The chyme is then slowly moved from one haustra to the next through the four regions of the colon. Most of the movement of chyme is achieved by slow waves of peristalsis over a period of several hours, but the colon can also be emptied quickly by stronger waves of mass peristalsis following a large meal.

While chyme moves through the large intestine, bacteria digest substances in the chyme that are not digestible by the human digestive system. Bacterial fermentation converts the chyme into feces and releases vitamins including vitamins K, B1, B2, B6, B12, and biotin. Vitamin K is almost exclusively produced by the gut bacteria and is essential in the proper clotting of blood. Gases such as carbon dioxide and methane are also produced as a byproduct of bacterial fermentation and lead to flatulence, or gas passed through the anus.

The absorption of water by the large intestine not only helps to condense and solidify feces, but also allows the body to retain water to be used in other metabolic processes. Ions and nutrients released by gut bacteria and dissolved in water are also absorbed in the large intestine and used by the body for metabolism. The dried, condensed fecal matter is finally stored in the rectum and sigmoid colon until it can be eliminated from the body through the process of defecation.