Which U.S. State is the most festive at Christmastime?

By analyzing Google Trends search data, we discovered which states were the most festive — and which weren’t feeling quite as jolly.

Alec McPikeIn addition to writing for Innerbody Research, Alec is also a Master Scuba Diver and U.S. Coast Guard veteran. Alec earned a B.A. in journalism with an outside concentration in psychology from Pepperdine University. 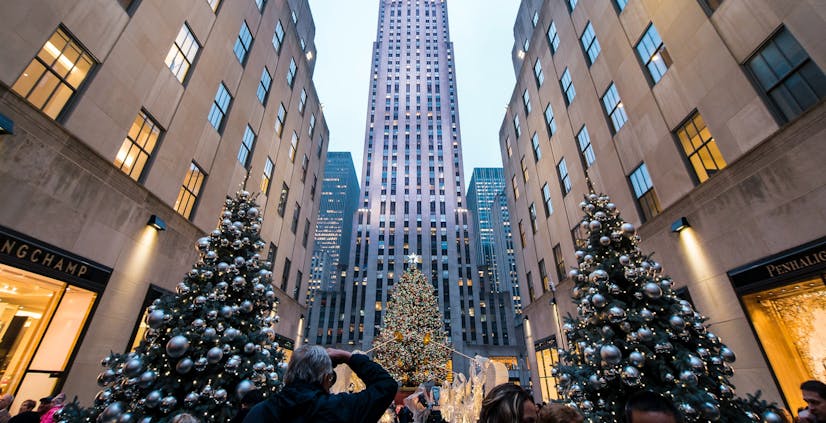 Overall, Americans almost universally observe the Christmas holiday. Across all genders, ages, and education and income levels, more than nine out of ten people claim to celebrate Christmas. It is celebrated by 85% of people who otherwise claim to be non-religious, and it even appears to be a unifying event (in the celebratory sense) for Democrats and Republicans.

Despite the controversy in recent years surrounding the so-called “War on Christmas,” which has pitted politicians and news outlets against each other — in a battle over what’s arguably the favored holiday of the vast majority of Americans — the modern American Christmas is clearly for everyone. Less than half of Americans (46%) now celebrate Christmas primarily as a religious holiday (rather than a cultural one). Only half of Americans (52%) say they prefer being greeted with either “Merry Christmas” or “Happy Holidays” when entering a store or business; the other half don’t have strong feelings either way.

Given the increasingly universal enjoyment of Christmas, we wanted to know which states were the most (and least) festive. By analyzing Google Trends search data, we were able to learn how often specific keywords or phrases were searched for in each state, and we discovered a range of differences in terms of preferred aspects of the Christmas season and general levels of festiveness.

Most and least festive states: an overview 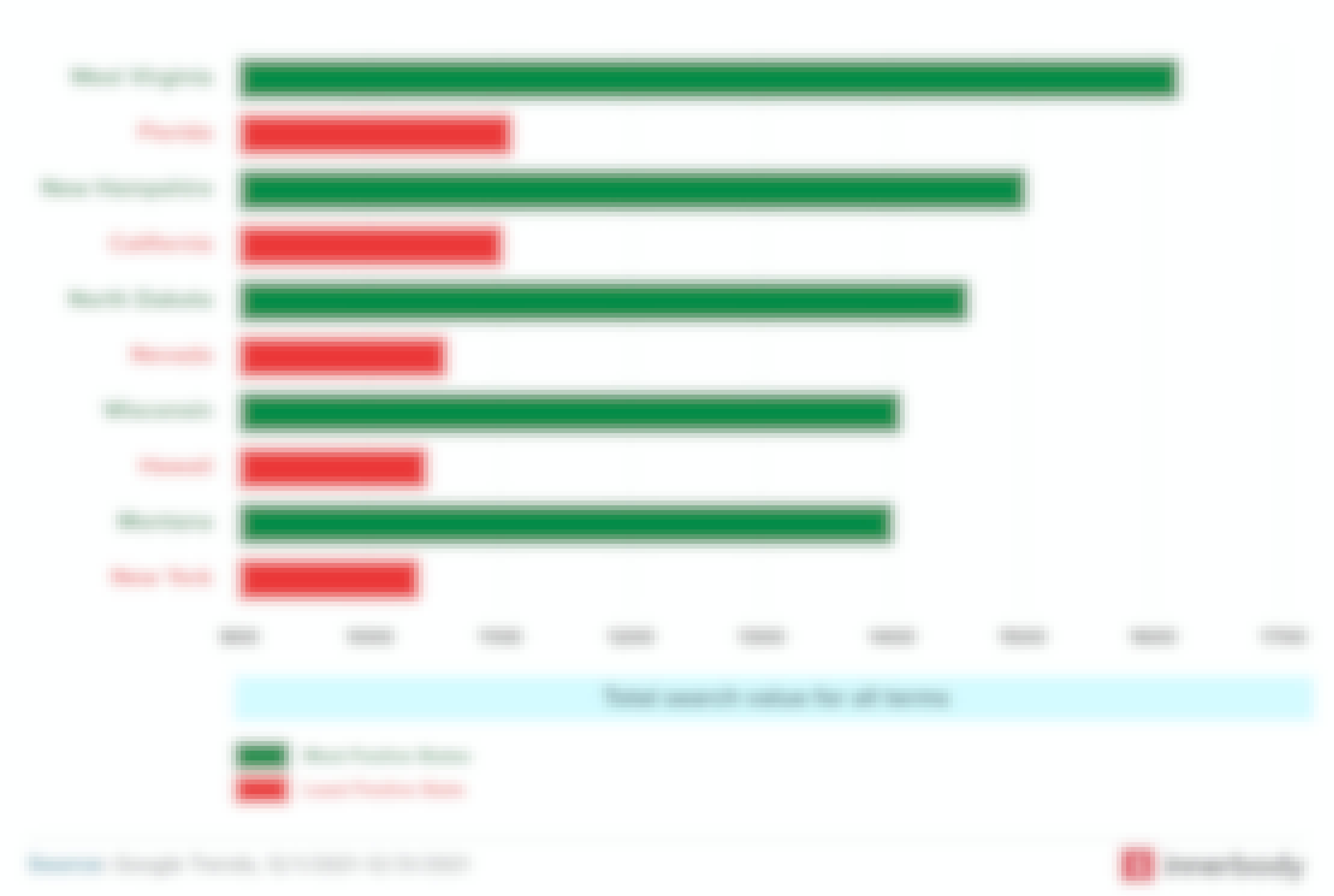 By a significant margin, much more so than Thanksgiving or the Fourth of July, America's favorite holiday is Christmas. External displays of the Christmas spirit look different across the U.S. Some states hold boat parades or fun runs; other states erect 100-foot-tall Christmas trees, establish intricate Christmas villages, or construct elaborate light displays.

In Alabama, the first state to make Christmas a legal holiday, a massive tree is placed outside the capitol building in Montgomery, and it isn’t uncommon to see a nicely decorated Christmas cactus in Arizona. Disneyland is transformed into a winter wonderland in southern California. Every year in Chicago, Illinois, people enjoy the Christkindlmarket (a holiday market modeled after one in Germany that dates back to 1545). And, of course, there’s the famous tree lighting at Rockefeller Center in New York — a tradition that has attracted millions of tourists since 1931.

Just because each state tends to do Christmas in their own way doesn’t mean they are equally enthusiastic about the holiday. So, to determine which states were the most (and least) festive, we analyzed Google Trends search data from December 2021, then ranked each state based on how prolifically they searched for holiday-related items and activities in their area. The states that searched most for the items on our “festive terms” list are, by our account, the most festive.

For reference, the numbers in parenthesis we mention are generated by Google Trends and represent the relative popularity of a given term. A value of 100 is the peak popularity of the term specified, while a value of 50 means that term is half as popular.

Below are the states we found to be the most festive (the ones with the highest total search value):

Other than Montana, the most festive states appear to be clustered in the east/northeast portion of the U.S., an area that typically has colder winters and receives more snowfall.

As for the least festive states:

We again have one seasonal outlier — New York — but the remainder of this short list contains four of the warmest states in the U.S., with Hawaii and Florida getting almost no snow at all. Perhaps it’s the absence of frosty temperatures and white Christmases that make these states less interested in festivities.

Most popular aspects of the Christmas season by state 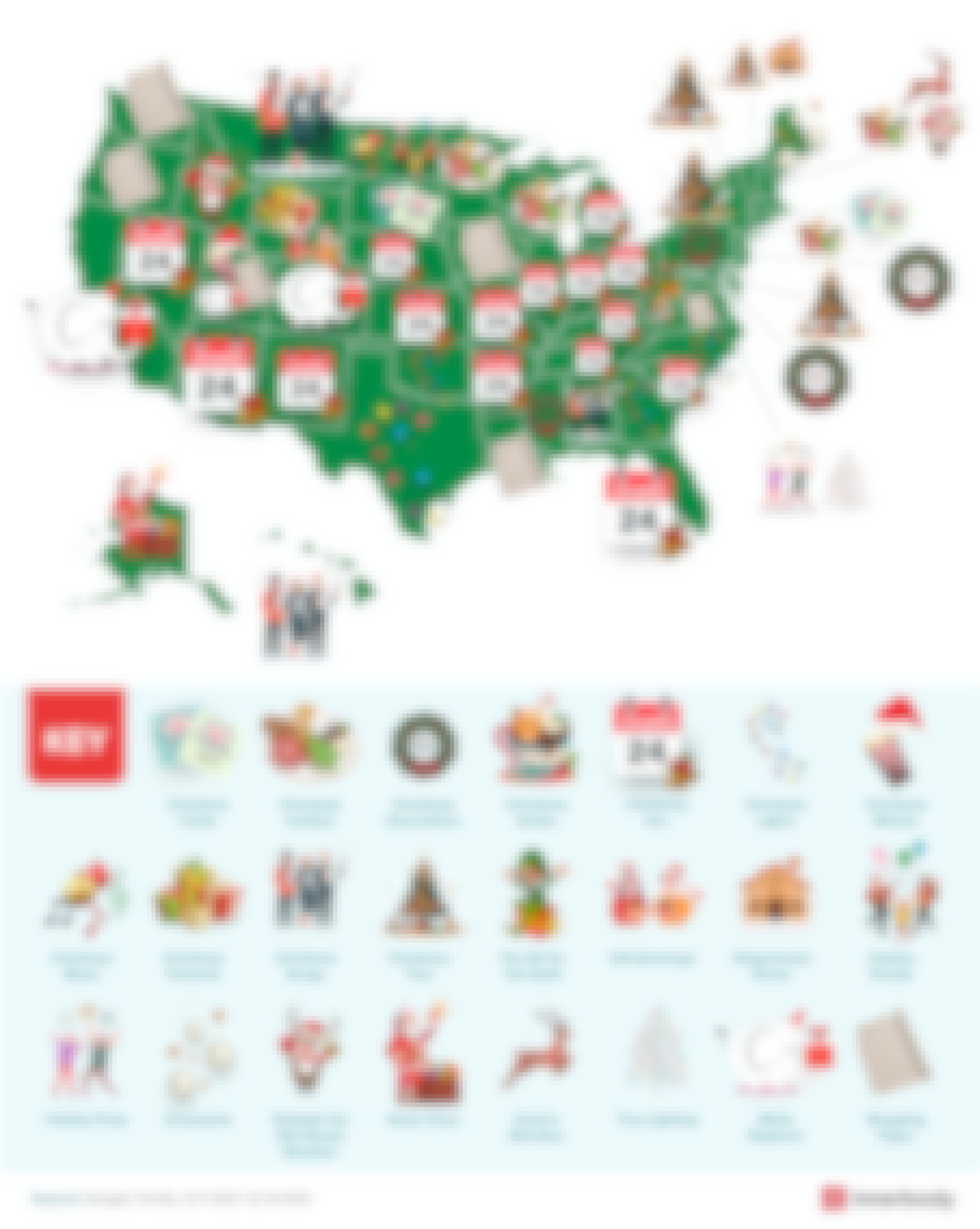 Given that, historically, 79% of the nation’s yearly Christmas tree harvest (16 million trees) has come from North Carolina and Oregon, you might think that these two states would have shown an above average interest in Christmas trees. But that was not the case.

Oregonians, we discovered, were most interested in wrapping paper (76), while North Carolinians were all about Christmas lights (100). This could be due in part to the ongoing decline in the Christmas tree market: more than 75% of the Christmas trees Americans are taking home these days are artificial.

As humans, we are wired to anticipate future events (positive and negative). Looking forward to enjoyable future events can actually have a positive impact on our mental health and overall sense of well-being. This could be why, according to our research, the most popular aspect of the Christmas season (the most searched for term in 15 states) was Christmas Eve.

Besides Oregon (76), we found that Iowa (93), Louisiana (82), Washington (77), and Virginia (77) were all presumably in the giving spirit, given they all also searched most for wrapping paper. In Utah, wrapping paper, Christmas movies, and white elephant exchanges (100) were all of equal interest.

We found that the preferred aspects of the Christmas season were somewhat less consistent throughout the rest of the states, with no single search term being the most popular in more than four states.

Here’s where the rest of the country’s primary interests landed:

Most popular aspects of the Christmas season 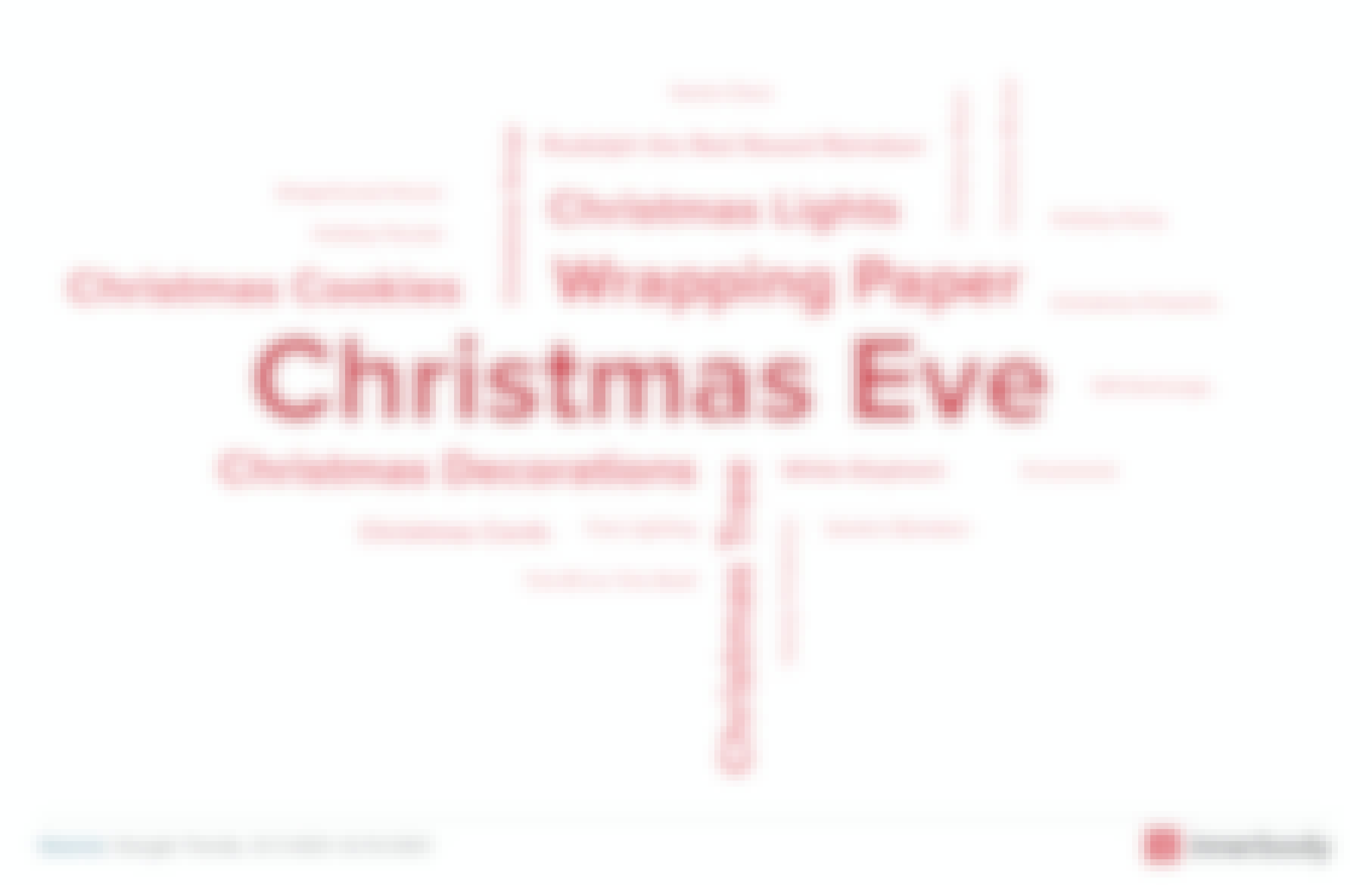 When all cultural and religious preferences are set aside, it becomes clear that the majority of Americans show their enthusiasm for the Christmas season in the same way: shopping. In 2021, Americans were expected to spend an average of 866 dollars each on Christmas gifts (a record high for the past 20 years), with a countrywide total expenditure between $843.4 billion and $859 billion (more than double the total holiday retail sales back in 2002).

In our study, however, we found most of the most popular aspects of the Christmas season to be unrelated to the buying or exchanging of gifts. As mentioned above, Christmas Eve — with its anticipatory benefits — was the most popular. The rest of the top ten list (save for wrapping paper and white elephant) appeared to be aspects of tradition, celebration, decoration, and holiday treats.

In order, here are the top ten most popular aspects of the Christmas season:

During last year’s holiday season, there was a significant spike in COVID-19 cases. It’s certainly possible that, when we collected the data for our study, social events like holiday parties, parades, gift exchanges, and Christmas tree lighting events were simply not as appealing to people. Surprisingly, though, a number of traditional at-home favorites — such as Christmas movies, gingerbread houses, ornaments, and Santa Claus himself — weren’t of much interest to nearly every state, either.

The least popular aspects of the Christmas season were the ones searched for most in only one state. This includes:

By analyzing Google Trends search data, we sought to identify the most festive states in the U.S. and the most popular aspects of the Christmas season for those states. For our study, we used a list of “festive” keyword searches during December 2021. Using the numerical search values for each term, we determined which terms were searched for the most in each state. Then, we analyzed the data to discover which aspects of the Christmas season were the most popular in which states, as well as which states were the most festive based on the sum of their search values for all the included terms.

Innerbody Research is committed to providing objective, science-based suggestions, and research to help our readers make more informed decisions regarding health and wellness. We invested time into this study to see which states ranked the highest and lowest for fun, festive trends that occur during the Christmas season. We hope to reach as many people as possible by making this information widely available. As such, please feel free to share our content for educational, editorial, or discussion purposes. We only ask that you link back to this page and credit the author as Innerbody.com.

Olito, F. (2020, December 24). What Christmas looks like in every State. Insider. Retrieved October 11, 2022, from https://www.insider.com/christmas-in-every-state-2019-11#in-the-arizona-desert-some-people-decorate-cacti-for-their-christmas-tree-3

Zubernis, L. (2022, January 2). Anticipation is part of being a fan, and that's a good thing. Psychology Today. Retrieved October 12, 2022, from https://www.psychologytoday.com/us/blog/the-science-fandom/202201/anticipation-is-part-being-fan-and-s-good-thing