The scaphoid bone is one of eight carpal bones in the wrist. It plays several key roles in the wrist by forming joints with five other bones and supporting several ligaments. The name scaphoid comes from the Greek words for “boat-like,” describing how its shape resembles the hull of a sailboat.

The scaphoid bone is a small, roughly triangular bone found in the carpal region. It is one of the eight carpal bones and the largest of the four proximal row carpals. The scaphoid bone is convex on its proximal end and concave on its distal end, giving it the appearance of a bowl or a boat.

When viewed dorsally, the scaphoid bone has a rough, bumpy surface that provides attachment points for the ligaments and joint capsules of the wrist. A smooth, rounded, and convex head dominates its proximal end forms part of the wrist joint with the radius and lunate bones. On the side of the head, a tubercle extends laterally toward the trapezium bone. Distal to the tubercle and head, the scaphoid bone narrows to a blunt point as it passes the trapezoid and trapezium bones on its lateral end and the lunate and capitate bones on its medial end. The edges of the inferior portion are smooth facets that form planar joints with the neighboring bones.

Viewed from its palmar surface, the scaphoid bone has a large, smooth concavity on its medial side that forms a joint with the head of the capitate bone. Distal to this concavity is a smooth, flat, crescent-shaped facet that forms a planar joint with the lunate bone. On the lateral side, the tubercle projects out slightly to form a rough ridge that anchors the flexor retinaculum of the hand and forms the lateral wall of the carpal tunnel.

The scaphoid bone plays several important roles in the wrist. It forms about half of the radiocarpal joint with the radius, while the lunate and triquetrum bones form the other half. The radiocarpal joint is a synovial condyloid joint that provides most of the motion at the wrist. The scaphoid bone also forms several intercarpal joints with the lunate, capitate, trapezoid, and trapezium bones. These intercarpal joints allow the bones to glide past each other, increasing the overall mobility of the hand in all directions. Its dorsal and palmar surfaces also support the joint capsule of the carpals, the radial collateral ligament on its lateral edge, and the flexor retinaculum of the hand on its tubercle. 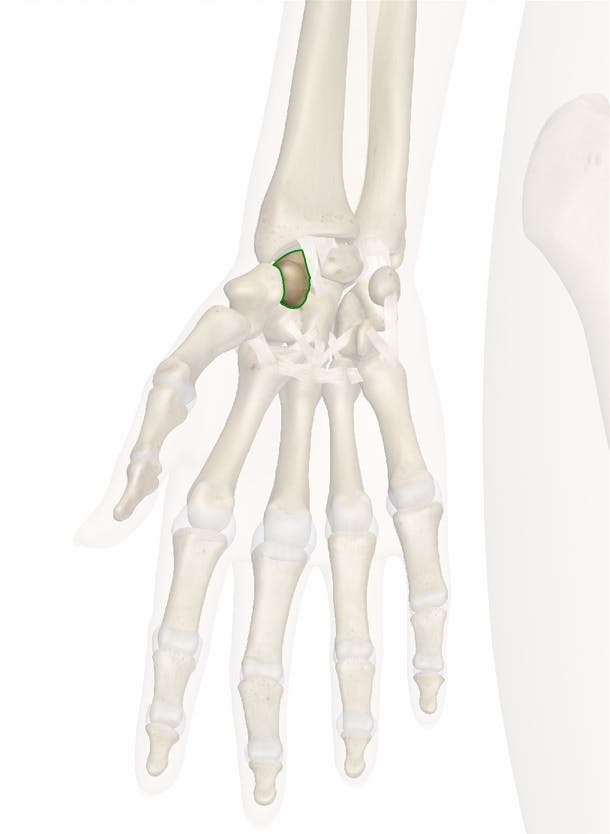