The tibia, sometimes known as the shin bone, is the larger and stronger of the two lower leg bones. It forms the knee joint with the femur and the ankle joint with the fibula and tarsus. Many powerful muscles that move the foot and lower leg are anchored to the tibia. The support and movement of the tibia is essential to many activities performed by the legs, including standing, walking, running, jumping and supporting the body’s weight.

The tibia is located in the lower leg medial to the fibula, distal to the femur and proximal to the talus of the foot. It is widest at its proximal end near the femur, where it forms the distal end of the knee joint before tapering along its length to a much narrower bone at the ankle joint. Continue Scrolling To Read More Below... 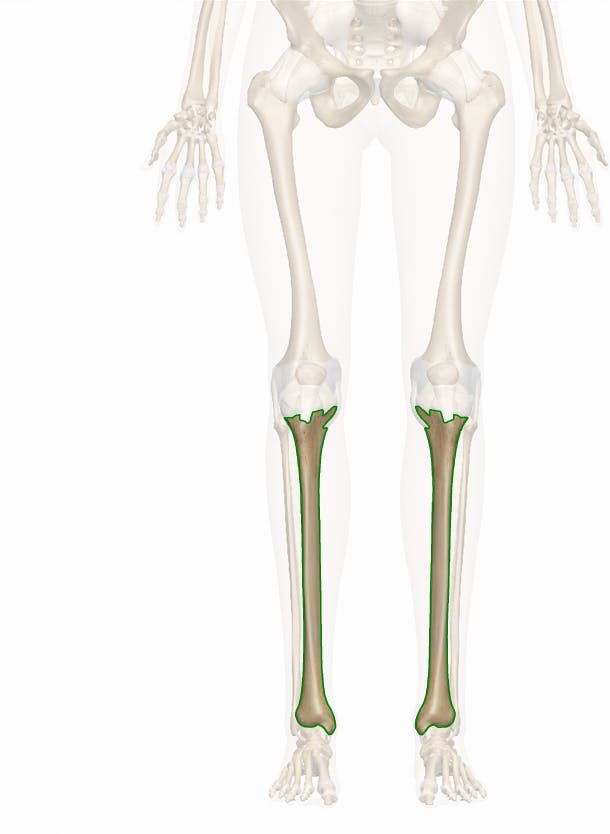 Continued From Above... The proximal end is roughly flat with the smooth, concave medial and lateral condyles forming the knee joint with the femur. Between the condyles is the intercondylar region, which includes the tibial spine and provides attachment points for the meniscus and anterior and posterior cruciate ligaments (ACL and PCL) of the knee. At the inferior edge of the lateral condyle is a small facet where the tibia forms the proximal tibiofibular joint with the fibula. This joint is a planar joint, allowing the tibia and fibula to slightly glide past each other and adjust the position of the lower leg.

Approaching the ankle joint, the tibia widens slightly in both the medial-lateral and anterior-posterior planes. On the medial side, the tibia forms a rounded bony prominence known as the medial malleolus. The medial malleolus forms the medial side of the ankle joint with the talus of the foot; it can be easily located by palpation of the skin in this region. On the lateral side of the tibia is a small recess known as the fibular notch, which forms the distal tibiofibular joint with the fibula.

The tibia is classified as a long bone due to its long, narrow shape. Long bones are hollow in the middle, with regions of spongy bone filling each end and solid compact bone covering their entire structure. Spongy bone is made of tiny columns known as trabeculae that reinforce the ends of the bone against external stresses. Red bone marrow, which produces blood cells, is found in the holes in the spongy bone between the trabeculae.

The hollow middle of the bone, known as the medullary cavity, is filled with fat-rich yellow bone marrow that stores energy for the body. Surrounding the medullary cavity and spongy bone is a thick layer of compact bone that gives the bone most of its strength and mass. Compact bone is made of cells surrounded by a matrix of hard calcium mineral and collagen protein that is both extremely strong and flexible to resist stress.

Finally, a thin layer of hyaline cartilage covers the ends of the tibia where it forms the knee and ankle joints. Hyaline is extremely smooth and slightly flexible, providing a smooth surface for the joint to slide across and a shock absorber to resist impacts.