The ulna is the longer, larger and more medial of the lower arm bones. Many muscles in the arm and forearm attach to the ulna to perform movements of the arm, hand and wrist. Movement of the ulna is essential to such everyday functions as throwing a ball and driving a car. 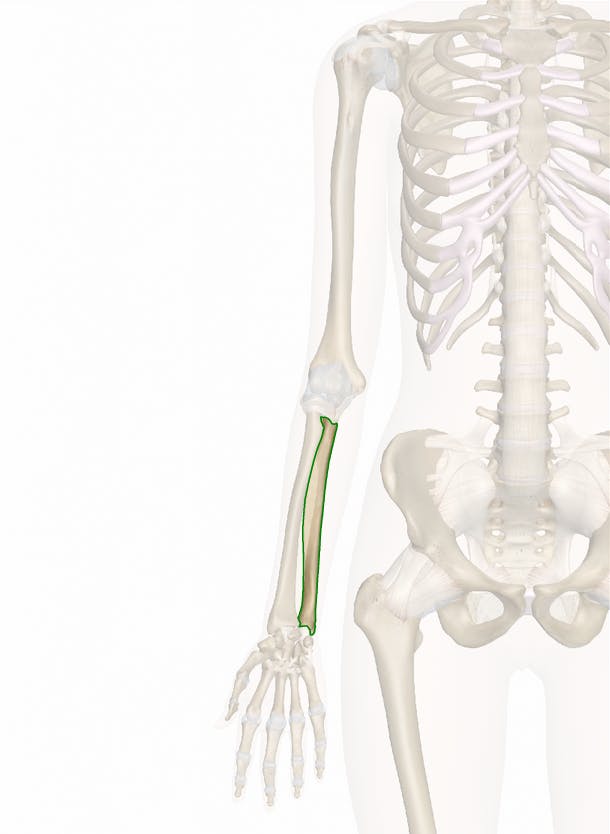 Moving distally from the elbow, the ulna begins to taper slightly in diameter along its entire length while curving medially. At its distal end, the ulna forms a small part of the wrist with the radius and the carpals of the hand. A rounded process known as the head of the ulna forms the distal radioulnar joint with the concave ulnar notch of the radius. The alignment of these joint-forming processes allows the radius to rotate around the ulna at the wrist. A small bony extension known as the styloid process protrudes from the posterior and medial corner of the ulna and provides an attachment point for the ulnar collateral ligament of the wrist.

Functionally, the ulna provides muscle attachment sites for over a dozen muscles in the upper arm and forearm. In the upper arm, the triceps brachii and anconeus muscles form insertions at the olecranon to extend the forearm at the elbow. The brachialis muscle has its insertion on the coronoid process to flex the arm at the elbow. Many muscles that act on the hand and wrist have their origins on the ulna, including the pronators, supinators, flexors and extensors.

Like its neighbors the humerus and radius, the ulna is classified as a long bone because of its long, narrow shape. All long bones have a similar structure, with a hollow shaft surrounded by compact bone and reinforced at the ends with spongy bone.

The hollow medullary cavity at the center of the ulna is filled with a soft, greasy substance known as yellow bone marrow. Yellow bone marrow contains many adipocytes and stores energy for the body in the form of triglycerides, or fats.

Surrounding the medullary cavity is the hard, dense compact bone made of mineral matrix and collagen fibers. The mix of collagen and minerals, including calcium, gives the ulna its great strength and flexibility.

The ends of the ulna are reinforced by spongy bone that increases the strength of the compact bone near the joints without significantly increasing the mass of the bone. Each region of spongy bone is made of many thin columns known as trabeculae that act like the steel girders of a bridge to withstand the stresses placed on the bone. Red bone marrow is found in the spaces between the trabeculae and contains many stem cells that produce the body’s blood cells.

On the joint-forming ends of the ulna are thin layers of hyaline cartilage that cover the compact bone and protect it from the stresses at the joints. Hyaline is as smooth as ice to help bones glide past each other at the joints. It is also rubbery to absorb the shocks of impacts at the joints. The outer surface of the ulna (except at the joints) is covered in a thin fibrous layer known as the periosteum. Periosteum is made of a dense weave of collagen fibers that extend into the tendons and ligaments that attach the ulna to the muscles and bones of the arm.

The ulna begins at birth as a long bony shaft, known as the diaphysis, capped with hyaline cartilage at both ends. At around 4 years of age, the hyaline at the distal end by the wrist begins to ossify and forms a small bony cap known as the distal epiphysis. A thin layer of hyaline, known as the epiphyseal plate or growth plate, remains between the diaphysis and the newly formed epiphysis. The ulna grows lengthwise into the growth plate, which in turn grows to prevent the fusion of the diaphysis and epiphysis. At around age 10, the proximal tip of the olecranon begins to ossify and forms the proximal epiphysis. These three bones continue to grow and remain separated by the epiphyseal plates until the end of puberty and the beginning of adulthood, when they fuse together to form a single, unified ulna. The site of the epiphyseal plate becomes known as the metaphysis in the mature bone.