At its proximal end, the humerus forms a smooth, spherical structure known as the head of the humerus. Continue Scrolling To Read More Below... 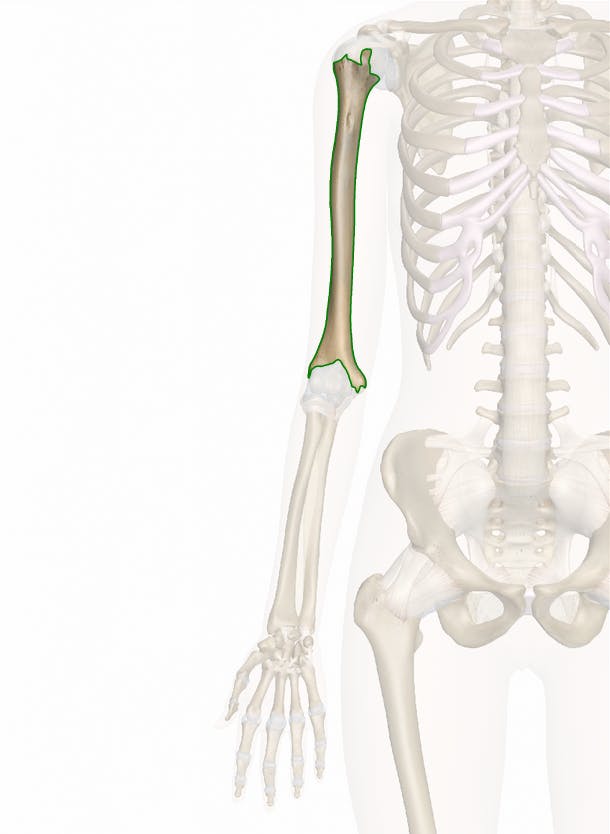 Below the deltoid tuberosity, the humerus gradually widens, doubling its width as it approaches the elbow. The distal end of the humerus contains two joint-forming processes known as the capitulum and trochlea. On the medial side of the arm, the trochlea interlocks with the ulna of the forearm to form half of the elbow joint. On the lateral side of the arm, the convex capitulum forms a loose connection with the concave head of the radius. The shape of the joint between the capitulum and radius allows the forearm and hand to rotate and bend at the elbow while the ulna forms a tight hinge with the trochlea. On the posterior side of the humerus, a small cavity known as the olecranon fossa allows the tip of the ulna, known as the olecranon, to lock into the humerus and prevent the extension of the elbow beyond 180 degrees.

The humerus is classified structurally as a long bone because it is considerably longer than it is wide. Like all long bones, the humerus is hollow in the middle of its shaft and is reinforced at the ends by small columns of spongy bone known as trabeculae. Red bone marrow, the tissue that produces new blood cells, is found in the ends of the humerus and supported by the trabeculae. The hollow medullary cavity in the middle of the shaft of the humerus is filled with fatty yellow bone marrow for energy storage. Compact bone forms the largest and strongest structure in the humerus, surrounding the trabeculae in the ends and the medullary cavity in the shaft. Surrounding the entire bone is the fibrous periosteum layer that provides a thin, yet strong connecting material for the tendons and ligaments that bind the humerus to muscles and other bones. Finally, the ends of the humerus are capped by a thin layer of hyaline known as articular cartilage that acts as a shock absorber in the joints.

The adult humerus develops from three individual bones in the fetus: the diaphysis, or central shaft, and two epiphyses that form the end caps of the bone. Between these three bones is a thin layer of hyaline cartilage known as the epiphyseal plate or growth plate. Cartilage in the growth plate grows throughout childhood and adolescence to elongate the humerus and provide for the growth of the arm. The cartilage is replaced by bony tissue so that the humerus increases its length significantly while the growth plate remains relatively thin. Finally, at the end of puberty, the cartilage stops growing and is completely replaced by bone to form a singular, unified humerus. The region of bone between the epiphysis and diaphysis in the mature humerus is known as the metaphysis.