The acromion of the scapula is a large bony projection on the superior end of the scapula. It is an important landmark of the skeletal system and a muscle attachment point essential to the function of the shoulder joint. The acromion also forms the acromioclavicular (AC) joint with the clavicle.

The pectoral girdle is an important region of the skeletal system that attaches the upper limb to the axial skeleton. Continue Scrolling To Read More Below... 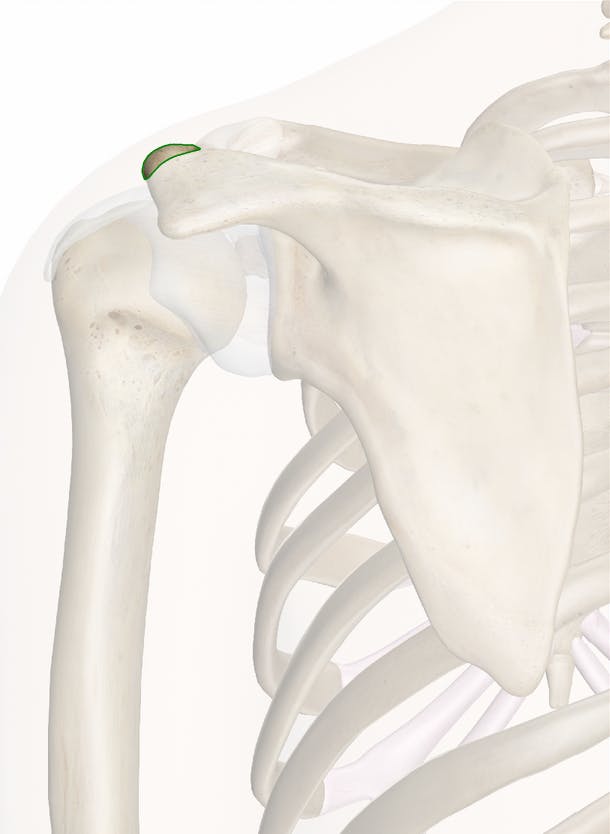 Continued From Above... Two bones, the scapula (shoulder blade) and clavicle (collarbone), form the pectoral girdle.

The scapula is a flat, triangular bone located posterior to the ribcage. A bony ridge, known as the spine of the scapula, rises from the posterior surface of the scapula along its medial side. The spine grows taller and thicker as it moves laterally and superiorly toward the shoulder joint. At the far end of the spine, the acromion forms where the bone widens significantly and extends anteriorly to cover the superior aspect of the shoulder joint.

The acromion is a flat bony projection and has a rectangular shape with rounded corners. It is only about 1 inch (2.5 cm) wide and around 2 inches (5 cm) long. The anterior end of the acromion is flat and smooth to form the acromioclavicular joint with the clavicle.

The acromioclavicular joint, or AC joint, is an important part of the shoulder that forms a joint between the acromion and the clavicle. It is a planar synovial joint that holds the scapula and clavicle together while allowing the scapula to glide in many directions relative to the rest of the body. The scapula’s movement at the AC joint greatly increases the mobility of the arm at the shoulder, especially when reaching across the body or elevating the arm towards the head.

Two major muscles, the deltoid and trapezius, attach to the acromion. The deltoid, which abducts the arm at the shoulder, forms its origin along the acromion, the spine of the scapula, and the clavicle. From these origins, it crosses the shoulder joint and inserts on the deltoid tuberosity of the humerus. The trapezius muscle arises from the spinous processes of the cervical and thoracic vertebrae and inserts on the acromion and spine of the scapula. Contraction of the trapezius rotates and retracts the scapula or may help to stabilize its position.