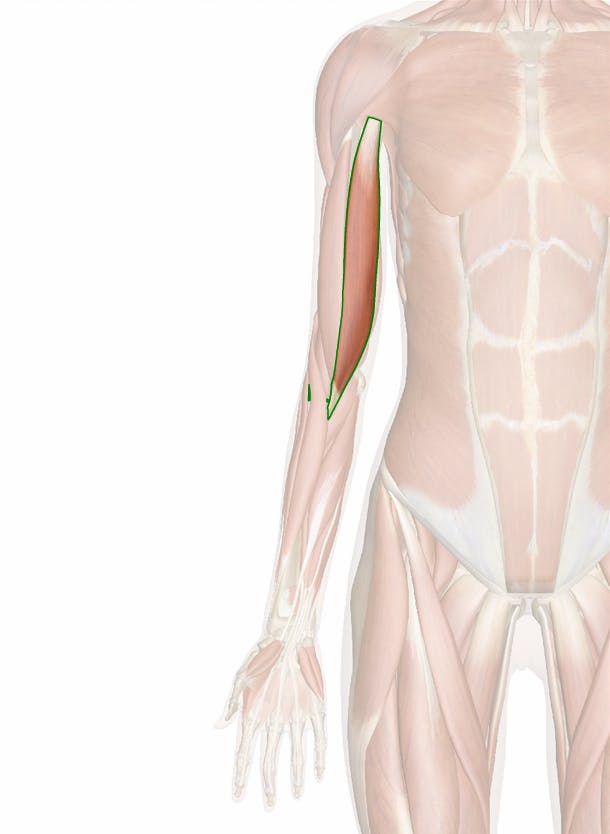 Continued From Above... From its origin, the short head passes anterior to the head and shaft of the humerus and fuses with the long head around the middle of the humerus. The fused biceps brachii muscle crosses the elbow joint along its anterior surface and inserts on the radius at the radial tuberosity.

The short head of the biceps brachii acts upon the bones of the upper limb across both the elbow and shoulder joints. Together with the long head of the biceps brachii, the short head flexes and supinates the forearm at the elbow. The biceps is often incorrectly thought of as the prime flexor at the elbow, when in actuality it is a synergist to the true prime flexor, the brachialis muscle. The biceps does act as the prime supinator of the elbow and is assisted by the supinator muscle of the forearm.

At the shoulder joint, the biceps brachii provides some help to the deltoid to flex the humerus or move it anteriorly. The short head also provides some unique functions that are not provided by the long head. It acts as an adductor to move the humerus toward the body’s midline and pull the arm closer to the trunk. The short head also acts as a fixator to stabilize the shoulder joint.