The ilium is the largest and most superior of the three bones that join to form the hipbone, or os coxa. It is a wide, flat bone that provides many attachment points for muscles of the trunk and hip. You can find the crest of your ilium by placing your hands on your hips. The superficial location of the ilium makes it a common site for extracting bone tissue for grafting and bone marrow for transplants.

The ilium is located in the pelvic region lateral to the sacrum at the base of the spinal column. Continue Scrolling To Read More Below... 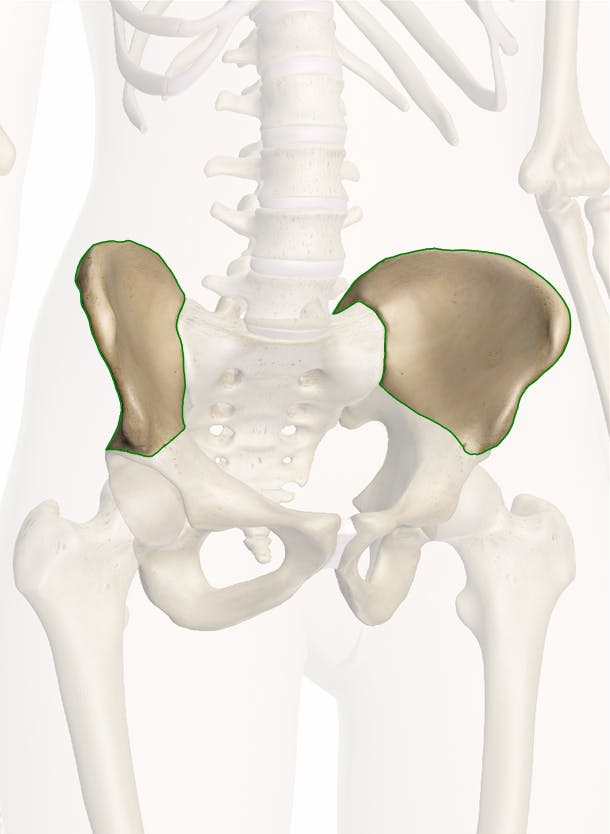 Continued From Above... It forms the superior region of the hipbone and joins with the pubis and ischium at the acetabulum, or hip socket. The largest region of the ilium is the ala, an area shaped somewhat like an elephant’s ear with a large, flat surface that is slightly concave when viewed from the anterior direction. Along the superior edge of the ala is a widened bony ridge known as the iliac crest. The iliac crest protrudes laterally towards the body’s surface and acts as an important and easily located bony landmark of the body. At the ends of the iliac crest, the ilium narrows sharply toward its center to form the anterior and posterior superior spines of the ilium. It turns again just below these spines to form the anterior and posterior inferior spines at the base of the ala.

Inferior to the ala, the ilium widens into a region known as the body of the ilium. Between the ala and the body is the greater sciatic notch, a large V-shaped notch in the posterior ilium that allows the sciatic nerve to pass through the pelvis in order to innervate the leg. The body widens to form the sacroiliac joint on its medial surface and forms cartilaginous joints with the pubis and ischium at the acetabulum. The acetabulum is the cup-like structure that forms the socket of the hip joint.

The surface of the ilium is covered in a thin fibrous membrane known as the periosteum. The periosteum is made of dense irregular connective tissue and plays an important role in the connection of muscles to the surface of the ilium. Deep to the periosteum is a layer of compact bone that contains bone cells embedded in a hard mineral and protein matrix. Compact bone provides most of the strength and structural integrity to the ilium. The inner portion of the ilium is filled with many columns of spongy bone. Spongy bone supports the surrounding compact bone like the girders of a bridge, while leaving hollow spaces inside the bone to reduce its weight. These spaces are also filled with red bone marrow, which is responsible for the production of blood cells.

The ilium forms and grows during fetal development separately from the other hip bones, the pubis and ischium. At birth, these three bones remain separated by a thin layer of cartilage at the acetabulum. This cartilage layer provides room for the bones to grow independently before fusing during young adulthood when they are fully-grown.

The ilium forms the sacroiliac joint with the sacrum along its medial side and forms the superior end of the hip joint at the acetabulum. The sacroiliac joint is a planar joint that allows a slight degree of gliding between the pelvis and the spinal column. The hip joint is a ball-and-socket joint that permits the thigh to have a free range of motion.