A gliding joint, also known as a plane joint or planar joint, is a common type of synovial joint formed between bones that meet at flat or nearly flat articular surfaces. Gliding joints allow the bones to glide past one another in any direction along the plane of the joint — up and down, left and right, and diagonally. Slight rotations can also occur at these joints, but are limited by the shape of the bones and the elasticity of the joint capsule surrounding them. Continue Scrolling To Read More Below... 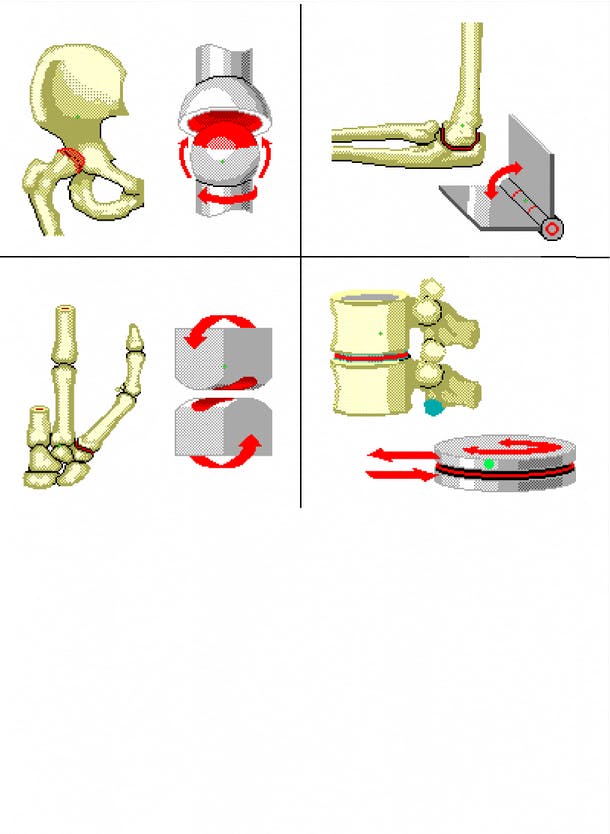 Continued From Above... Unlike most synovial joints, the angle formed between the bones at a gliding joint does not change significantly — just their position relative to one another.

The basic structure of synovial joints provides flexibility to gliding joints while limiting their movements in order to prevent injury. Synovial membrane lining the joint capsule produces oily synovial fluid to lubricate the joint and reduce friction. The fibrous joint capsule and its associated ligaments hold the bones together, limiting the extent to which they can glide and preventing dislocation. Articular cartilage between the bones provides a smooth, rubbery surface that both aids in the gliding motion and acts as a shock absorber during impacts to the bones.

Many gliding joints are formed in the appendicular skeleton between the carpal bones of the wrist; between the carpals and the metacarpals of the palm; between the tarsal bones of the ankle; and between the tarsals and the metatarsals of the foot. These small bones form many flattened facets between one another to provide exceptional flexibility to the hands and feet. The acromioclavicular (AC) joint of the shoulder is another gliding joint that greatly increases the flexibility of the shoulder and provides a pivot point for the shoulders to be elevated or depressed around.

Gliding joints are also formed in the axial skeleton throughout the neck and trunk to improve the flexibility of these regions. Two sets of gliding joints in the thoracic region — one set between the sternum (breast bone) and ribs at the sternocostal joints, and the other between the vertebrae and ribs at the vertebrocostal joints — permit the ribs to elevate and depress slightly and change the volume of the thoracic cavity. These slight rib movements are necessary to perform the vital process of breathing.

Another set of gliding joints is found between the facets of the twenty-six vertebrae at the intervertebral joints. These gliding joints allow for the flexion, extension, lateral flexion, and rotation of the trunk while maintaining the strength of the vertebral column that supports the body’s weight and protects the spinal cord.