A hinge joint is a common class of synovial joint that includes the ankle, elbow, and knee joints. Hinge joints are formed between two or more bones where the bones can only move along one axis to flex or extend.

The simplest hinge joints in the body are the interphalangeal joints found between the phalanges of the fingers and toes. In these hinge joints, the bones are able to flex to decrease the angle between them - like when making a fist or curling the toes - and extend to increase their angle to about 180 degrees when holding the foot or hand flat. Continue Scrolling To Read More Below... 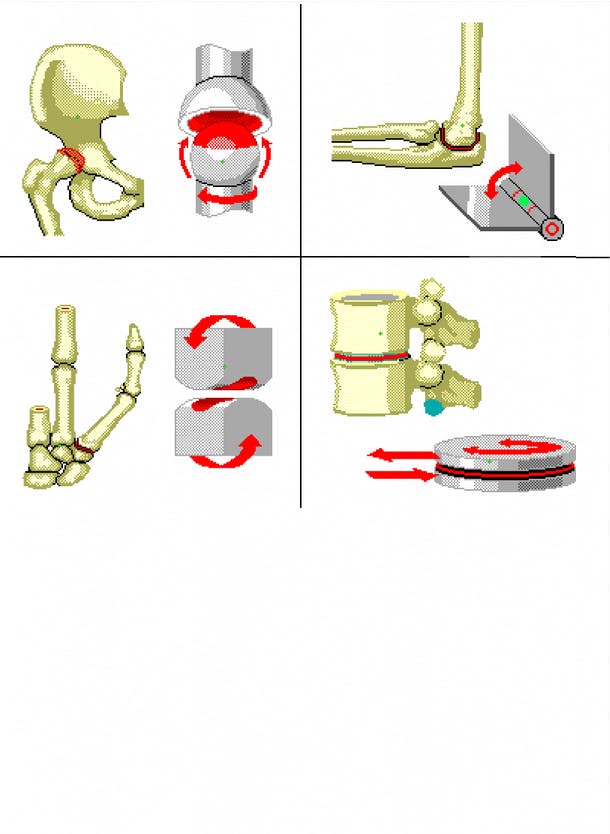 Continued From Above... Because very little body weight and mechanical force is exerted on these joints, they are made of very simple synovial joint material with tiny accessory ligaments for reinforcement. Each bone is capped with a thin layer of smooth hyaline cartilage to reduce friction in the joint and to absorb the shock of the joint being compressed. The bones are surrounded by a capsule of tough fibrous connective tissue lined with synovial membrane. The joint capsule at these joints forms the knuckle that is visible through the skin that covers it. Oily synovial fluid produced by the synovial membrane lubricated the joint to reduce friction and ensure the free movement of the hinge joints.

The elbow is a more complex hinge joint that forms between the humerus of the upper arm and the ulna and radius of the forearm. The elbow is subjected to much stronger forces than the knuckles of the fingers and toes, and thus contains several strong accessory ligaments and unique bone structures that reinforce its structure. The ulnar and radial collateral ligaments help to hold the ulna and radius to the humerus and reinforce the joint. Extending from the end of the ulna, the olecranon is a bony process that forms the tip of the elbow and fits into a notch in the humerus known as the olecranon fossa. The olecranon limits the extension of the elbow to around 180 degrees before locking into the olecranon fossa.

Similar to the elbow, the ankle joint forms a hinge joint between the tibia and fibula in the lower leg and the talus bone in the foot. The medial malleolus of the tibia and the lateral malleolus of the fibula form a bony socket around the talus to limit the movement of the foot to one axis. Four accessory ligaments, including the deltoid ligament, hold the bones together and reinforce the joint to withstand the stresses of supporting the body’s weight while standing, walking, or running.

Located between the femur of the leg and the tibia and fibula of the lower leg, the knee is the largest and most complicated hinge joint in the human body. The knee has evolved to be incredibly strong and durable while maintaining the wide range of motion necessary for locomotion. Many internal and external ligaments reinforce the knee as it supports the entire body’s weight with little reinforcement from the surrounding bones. This lack of reinforcement allows the knee to rotate slightly when flexed as well as enjoy a large degree of flexion. The meniscus, a pad of fibrocartilage between the femur and tibia, acts as a shock absorber to prevent collisions between the bones during high impact activities such as running and jumping.