The femoral nerve begins as the largest nerve to extend from the lumbar plexus in the lower back as a combination of fibers from the L2, L3, and L4 spinal nerves. Continue Scrolling To Read More Below... 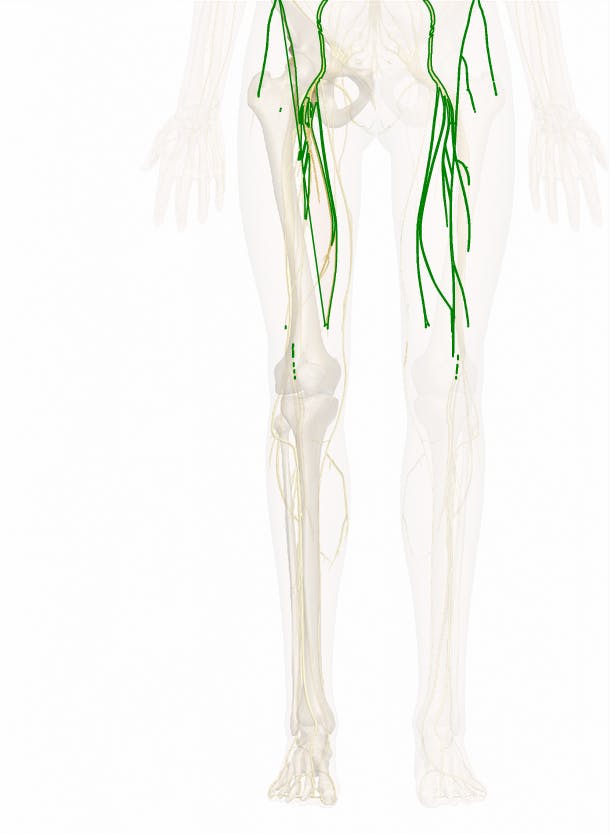 The posterior branch of the femoral nerve forms several important branches that serve the leg and are vital to the extension of the knee. Its muscular branches innervate the four quadriceps muscles (rectus femoris, vastus lateralis, vastus medialis, and vastus intermedius), which flex the thigh at the hip and extend the leg at the knee. The cutaneous branches form the saphenous nerve, the largest branch of the femoral nerve, which runs parallel to the saphenous vein in the subcutaneous layer toward the lower leg. In the leg, the saphenous nerve innervates the skin along the anterior and medial surfaces.

The femoral nerve is a mixed nerve, meaning that it combines both afferent and efferent fibers in the same nerve. Afferent nerves carry important sensory information from the tissues of the thigh and leg (especially the skin) to the central nervous system for processing. Efferent neurons perform the essential function of carrying signals to the muscles of the thigh and leg to control their tension and movement. Thus the femoral nerve functions like a two-lane road, carrying information both to and from the brain through two sets of one-way neurons. These signals permit the body to react to stimuli and produce a variety of movements, including walking, running, and maintaining balance.