The cerebrum is the most superior and anterior of the brain’s major regions. It is the seat of reason, planning, memory, and sensory integration. All conscious thought originates in the cerebrum and can influence the subconscious functions of the lower regions of the brain.

The cerebrum is a large, folded mass of nervous tissue that makes up the majority of the human brain. Many ridges of cerebral tissue, called gyri (singular: gyrus), extend from the surface of the cerebrum and are bordered by grooves in the cerebrum. Continue Scrolling To Read More Below... 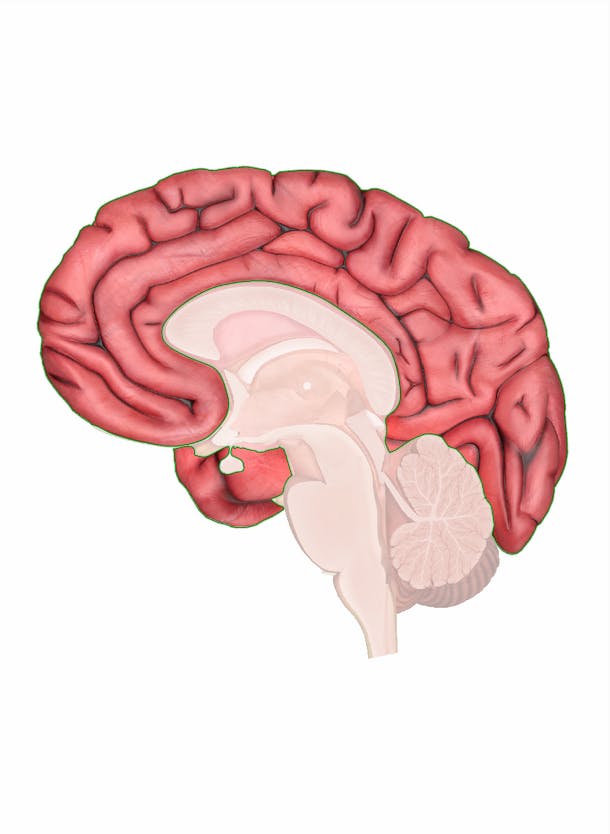 Continued From Above... Most of the grooves are shallow depressions called sulci (singular: sulcus) while some are deeper depressions called fissures. Several of the sulci and fissures act as important anatomical landmarks to mark the borders of larger regions of the cerebrum.

Each cerebral hemisphere is further subdivided into four lobes that are named for the covering bones of the cranium.

The lateral sulcus widens at the bottom like an upside down letter T to form a region of cerebrum known as the insula. Often referred to as the 5th lobe of the brain, the insula is made of deep cortical material that is covered by regions of the temporal, parietal, and frontal lobes.

The surface of the cerebrum, with its many convoluted gyri and sulci, is extremely important to the function of the brain. It is in this region, known as the cerebral cortex, where most of the processing of the cerebrum takes place. The cerebral cortex is made of gray matter with billions of neurons forming trillions of synapses that produce many of the brain’s functions, including planning, creativity, and memory. A few other regions of gray matter are found deep within the brain and are known as nuclei. These regions also perform important processing functions. For example, several of these nuclei form the basal ganglia, which play an important role in controlling muscle movements. Another group of nuclei form the limbic system, which controls emotional responses and behavior.

The cerebral cortex provides most of the functions of the cerebrum and is organized into three major regions: sensory, association, and motor areas.

All three of the cerebral areas must work together as a team to produce appropriate responses and control of the body. For example, when someone asks you a question, the sounds of speech are detected by the ear and sent to the primary auditory area. The primary auditory area processes the sound information and delivers it to the auditory association area, which translates sounds into words and considers the meaning of those words. Another association area receives information from the auditory association area and plans a response. Finally, the information passes to the motor area, which executes the appropriate response by stimulating skeletal muscles to produce speech to answer the question.

The cerebrum is made primarily of nervous tissue, of which there are two main types: gray matter and white matter. Gray matter consists of the unmyelinated cell bodies and dendrites of neurons, while white matter contains the myelinated axons that connect the neurons. White matter carries nerve signals between regions of the brain and spinal cord, while gray matter integrates information in the cerebrum. Gray matter is found in the cerebral cortex and in the basal nuclei, while white matter is found surrounding these regions.In addition to nervous tissue, the cerebrum also contains several other important tissue types. Vascular tissue in the form of arteries, capillaries, and veins supplies the nerve cells with nutrients and removes waste products. The meninges surrounding the cerebrum are made of fibrous connective tissues and protect the cerebrum from infections and mechanical damage.